Frida Southwest opens in The Paseo Arts District after more than five years in the works. 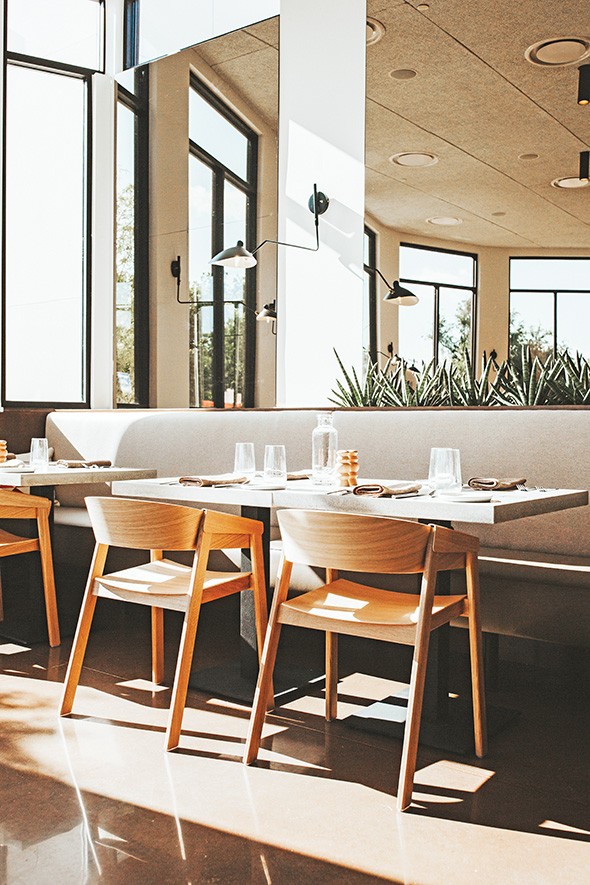 After more than five years of setbacks and delays, Frida Southwest, 500 Paseo Drive, seated its first dining guests. In the modern space with huge windows and exterior lined with weathering steel, which is designed to be a fast-controlled rusting process, the more than 5,000 square-foot space looks well-established in The Paseo Arts District with contemporary accents.

When Shaun Fiaccone, owner of Humankind Hospitality Services (Picasso Cafe, The Other Room, Oso on Paseo) and ardent supporter of The Paseo Arts District, saw the land up for sale, he knew he didn’t want to risk a new person’s vision to come into the district and bring an establishment that didn’t fit with its Spanish revival architecture and what Fiaccone termed a laissez-faire attitude.

“I bought the property without a plan,” he said. “ I wanted it to organically take shape. … Building a restaurant is something that should fall into the hands of a developer. I was naïve going into this by thinking to build a restaurant, you hire an architect and a general contractor and it just happens. … Once you tell me the space can be any size or shape that you want, it becomes more difficult.”

Three architects, two building permits and a surprise environmental remediation bill later, construction on Frida finally took place, but not without the concept of the restaurant changing.

"We get to set that tone and
write that dialogue."
—Ryan Parrott tweet this

The restaurant named after famous Mexican artist Frida Kahlo was originally envisioned to be a straightforward Mexican restaurant, but Fiaccone and partners decided to keep a Mexican influence but incorporate more Southwestern flavors by way of Mexico City, Santa Fe, Oklahoma and everything in between.

During the delays in construction at Frida, the culinary creative team with Humankind, which includes chef and partner Ryan Parrott and chef Chris McKenna, opened and designed Oso on Paseo, which partially filled the original Frida concept of providing high-quality tacos and burritos.

Parrott said Frida’s cuisine pivot will allow the restaurant to set the parameters of how the market will view Southwestern cuisine going forward.

“Just like the very first Mexican restaurant in Oklahoma City got to dictate what it will be up front to diners; we get to set that tone and write that dialogue,” Parrott said.

“Cheever’s [Cafe] has some Southwest cuisine with Tex-Mex mixed in, but there’s no one else really doing it [in the market],” McKenna said.

Diners are greeted with an amuse-bouche of manchego cheese with a fruit olive oil and dark chocolate, a flavor combination inspired by the culinary team’s trips to Mexico over the years. 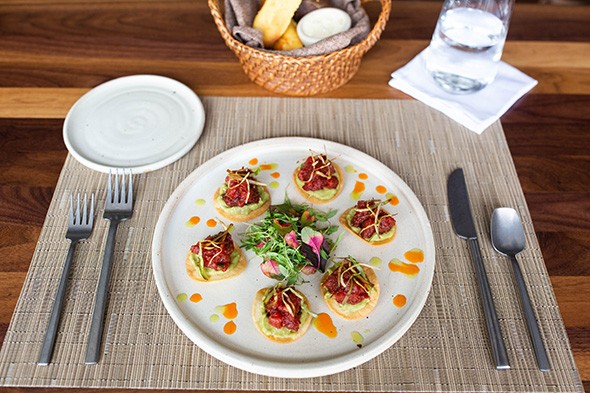 Tuna Tostaditos with ahi tuna marinated in guajillo chile, jalapeño and citrus with avocado and fried leeks is the restaurant’s answer to Southwestern tartare. Short rib empanadas are served with New Mexico green chile, mushrooms and a brûléed goat cheese and ancho demi-glace.

The holy trinity of Southwestern cooking, according to McKenna, is the combination of beans, squash and corn. The three sisters are highlighted with the bone-in Jidori chicken breast with grilled asparagus.

“I was skeptical of Jidori chicken because it’s twice as expensive, but there’s a big difference,” McKenna said. “They call it the Kobe of chicken.”

McKenna said the steak is Frida’s ode to the Cowboy Rib-eye by Southwestern chef Stephan Pyles.

“We wanted the menu in the parameters of a chop house and to incorporate different sides using tamales as starch rather than having it potato-heavy,” McKenna said.

After much soul-searching, Fiaccone said the delays and menu pivot at Frida have ended where they should have been all along. He wants to provide a restaurant so Oklahomans and those visiting the city can eat somewhere representative of the state.

“When Southwest cuisine was gaining popularity in the ’80s and ’90s, it was an era dominated by corporate restaurants,” Fiaccone said. “A lot of these chefs that started out cooking with these flavors of indigenous peoples and Mexican people and European settlers that ended up in the region were consolidated by large conglomerate restaurants. Chili’s Southwest eggrolls became ubiquitous, but what chef in their right mind wants to associate themselves with Chili’s? We lost a lot of our cultural food as it was developing.”

“The footprint for Frida ended up being a lot bigger than we thought, so we had more room than needed,” Fiaccone said. “I like the idea of having secret things or something that takes you by surprise. I wanted a place where you can have a whiskey, read a book and be inspired to create an amazing space. It’s very comforting and homey.”

The Daley menu will feature nine items that are classic American, such as a Reuben sandwich, Shrimp Louie, French onion dip, crabcake and fingerling potatoes served with crème fraîche and caviar.

“I can’t think of many places in the city serving caviar,” Fiaccone said.

Frida is open 11 a.m.-10 p.m. Monday-Thursday, 11 a.m.-11 p.m. Friday and Saturday and currently 5-9 p.m. Sunday. A Sunday brunch service will be added in the coming months. Reservations are strongly encouraged in the restaurant’s first few weeks of service.