Located in the city’s oldest commercial district, Hasslers has been in business more than 60 years. Nobody was looking at a phone — they were talking to each other.

In many respects, Norman is known for its sophistication and artistic urbanity. Hassler’s Restaurant does not contribute to that aura.

Nearby is the kind of independent home appliance and TV store that once could be found in most small American towns coast to coast. Stepping into Hassler’s is like leaving a city in the state’s largest metropolitan area and being instantly transported to Checotah or Henryetta.

The decor is a combination of faux house plants, craft fair-style shadow boxes and one wall with an enormous stylized rendering of Oklahoma University’s Owen Field. The place is spic-and-span. It doesn’t accept credit or debit cards. Hassler’s opens at sunrise and closes at 2 p.m.

On a recent weekday at noon, the clientele was mostly guys wearing ball caps on break from painting drywall and framing houses. Nobody was looking at a phone — they were talking to each other.

An experienced all-female wait staff knew many patrons by their first names. Matter-of-fact chat among chums overheard at one nearby table included, “I was going to have my wife cut my hair last night, but she’d had too many beers by the time I got home.”

There was a board by the door with daily specials that listed California omelette ($6), catfish with two sides ($7.25) and Indian tacos ($6.99). The menu is a lot to read through. 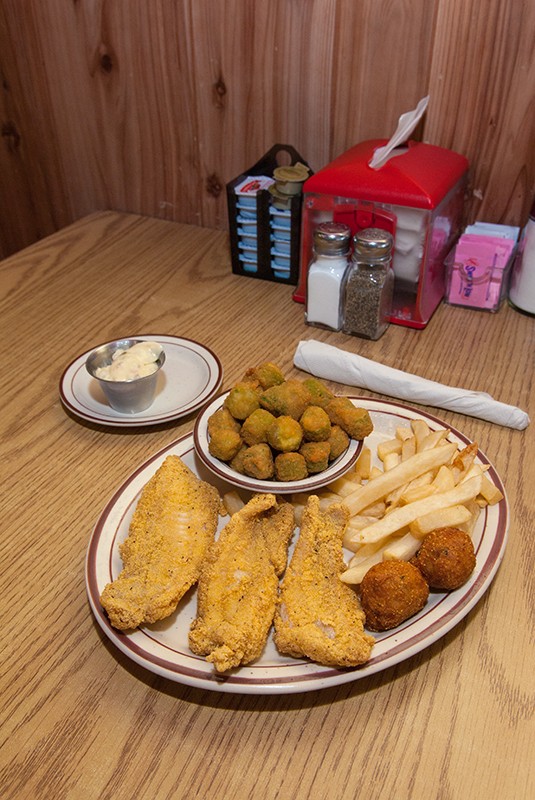 The catfish special arrived at the table hot out of the fryer with hot sauce and ketchup alongside. Crowding the platter were fries, okra and a couple of round hush puppies. It came with a generous serving of house-made tartar sauce. It was the kind of meal stout enough to fuel a long afternoon of fracturing shale or baling alfalfa. The catfish was delicious, and the sides were OK.

Mama’s Special ($4.99) and Papa’s Special ($5.25) were distinguished by two eggs instead of one on Papa’s, along with two pancakes, two strips of bacon and two sausage links. Heavenly Hashbrowns ($5.25) were celestial with eggs any style, cheese, peppers and grilled onions served right on top of the fried potatoes. It wouldn’t be Oklahoma without biscuits and gravy (large $2.99).

Dessert indulgence comes only in the form of various flavors of cream pie ($3.25). Coconut was a good choice.