Comedian and voice of Comedy Central Kyle Kinane returns to one of his favorite tour stops. 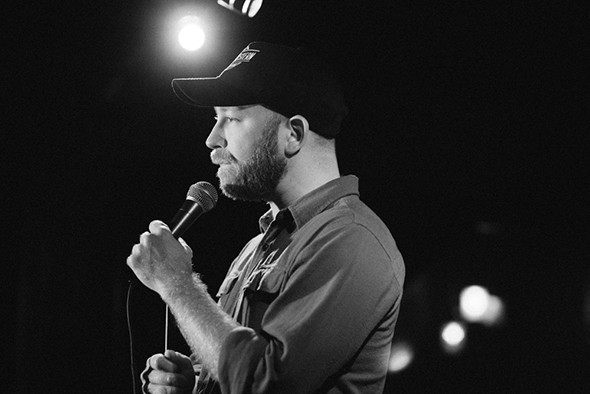 “I’m 41, and my name is Kyle, which means I’m on borrowed time, man,” comedian Kyle Kinane told Conan O’Brien earlier this year. “Look, there’s no such thing as an old Kyle. … My name’s not in history books; there’s no ‘the Third.’”

Consider this a call for action.

Thanks to his self-described “shotgun-blast” style of booking shows, Kinane will return to Oklahoma City 8 p.m. Sunday at The Paramount OKC, 11 N. Lee Ave., exchanging one night of his borrowed time for a chance to make you laugh.

Audience beware: He hasn’t failed yet.

The Los Angeles-based comedian, who is also the voice of Comedy Central on-air promotions, has been hard at work since his last time visiting the Sooner State. With a schedule full of tour dates, his Oklahoma stopover will be nothing short of a comedic treat.

“At this point, it’s not a tour anymore; it’s just my life,” Kinane said. “It’s just a vacation otherwise … running all over the place.”

Kinane started comedy in 1999 at his home in Chicago when he was 22. In 2003, he made the move to Los Angeles, hoping to make a name for himself.

“I was just going out with a case of CDs and kind of playing a show where anybody would let me,” he recalled of his early days.

Borrowing from the culture of DIY bands that relied on regular bookings in just about any place that would allow them to play, Kinane eventually hit the road. Traveling from show to show across the country, he built a repertoire in a process he described as “slow and steady.”

Kinane mentioned a comedy message board that “showed me some love” in a series of reviews on local shows in Los Angeles, which helped him gain some initial recognition. It wasn’t long before he attracted the attention of big-name comedians, and he was soon among some of the greatest names in modern comedy.

In 2016, he earned his own special, Loose in Chicago. Perhaps slow and steady wins the race after all.

Still, he understands success is not guaranteed.

“I just think any overnight success — I think you could lose it just as quick as you get it,” Kinane said. “You could have overnight failure too. At least I know I earned my spot. I put the time in, you know? I think I earned my audience.”

He describes comedy as “one of the only things in my life that if it didn’t go well, I wanted to go back and try harder as opposed to giving up on it.”

A comedian for almost 20 years, he reminisces on what could have been an alternative fate had he not discovered his love of comedy.

“Back home, I get to drive past the industrial park that I’d probably still be working at if I didn’t start doing comedy, so I kind of like that this is my job,” he said. “I tell jokes, and that’s how my bills get paid. That’s pretty unbelievable.”

Oklahomans once again have an opportunity to help him pay those bills.

Though he already has a show at Cherokee Casino in West Siloam Springs after his show in Little Rock, Arkansas, he arranged for an OKC stop before migrating up to Colorado for a booking in Fort Collins.

In a sense, OKC seems to have become a sort of refuge for Kinane when on tour.

“I got a little crowd going when I come there; I’ve got a little crew. I’m like, ‘Alright, what are we doin’?’” he said with the enthusiasm you’d expect when meeting an old friend. “I feel very welcome there; let’s put it that way.”

“He said that it’s a lot like we’re a group of people in an office and he’s gone on vacation for like a year and every day at work is like the first day back and we all go out after and get trashed,” said BradChad Porter, local comedian and one of three individuals running OKC Comedy.

According to Porter, OKC Comedy’s mission “is to provide a world class comedy experience to our OKC audience while continuing to provide new opportunities for local comics.”

His colleague and fellow comedian Cameron Buchholtz said they “realized that no one else was gonna book the comics that [they] wanted to see, so [they] just started doing it [themselves].”

In 2010, OKC Comedy booked Kinane for the first time. He delivered a free show at 51st St. Speakeasy, where he was compensated with bar receipts.

Almost a decade has passed since that initial gig, and Kyle has been climbing since.

“He’s gotten more famous, and we’ve absolutely loved watching things work out for him. He’s one of our favorite people,” Porter said.

Due to booking complications at their usual venue, OKC Comedy decided to try The Paramount OKC, located in historic Film Row.

Though the venue is smaller than what he’s used to, Kinane doesn’t seem to be bothered. Size doesn’t always matter. And if it does, sometimes smaller is better for these guys.

“I like small venues,” he said. “Comedy is, I think, best consumed in an intimate venue. You get too many people in one place, they stop paying attention and start talking to each other.”

“The space is a smaller venue and we’re excited about what that will mean for the show,” Porter said. “This show will sell out. It always does.”

Kinane suggested there was potential for another date before the Fort Collins engagement where the tour is scheduled to resume. Plans for this have yet to be confirmed, and no official announcement has been released.