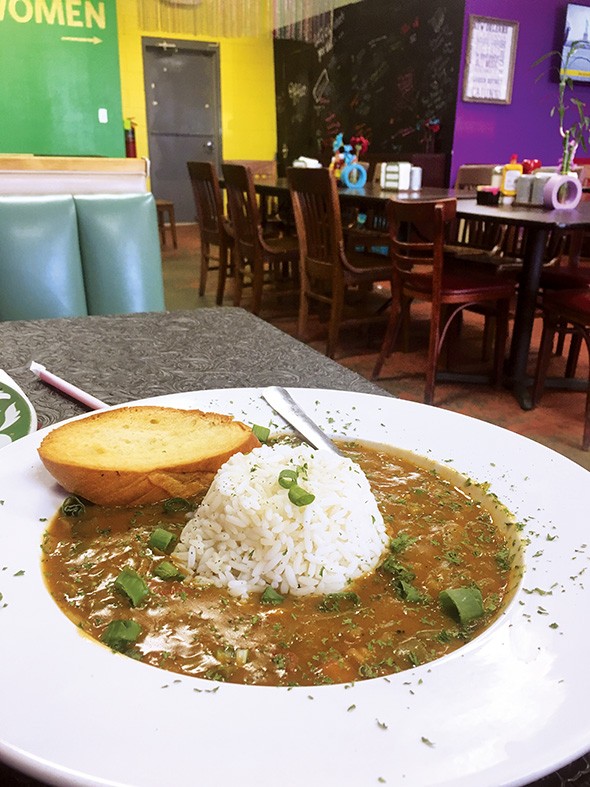 What works: The meatloaf is moist in the center and crispy on the exterior.
What needs work: The étouffée is tasty but leaves peppers and onions chopped.
Tip:It serves breakfast all day.

Even some of the nicest restaurants in town can deliver technically correct but soulless food when it’s put together by a line cook who does not care about the food.

Cooking with interest and passion is what separates the same ingredients. It’s why a dish cooked by a family member out of love is tough to beat; that intrinsic value elevates the dish.

Everything at Brielle’s Bistro, 9205 NE 23rd St., in Midwest City is cooked with purpose and uses fresh ingredients, and it is delivered in the final product. Owner and chef Dwayne Johnson opened the restaurant just over a year  ago and named it after his young daughter Brielle, who was born with arthrogryposis multiplex congenita (AMC), a rare condition that affects joints and muscles and restricts range of motion.  She has already gone through multiple surgeries to alleviate the difficulties of the disease, and she will turn 2 years old later this year.

“We wanted to build a brand not only for her, but to raise awareness for AMC,” Brielle’s website says.

The love of Brielle comes through in the final product in the menu that features all-day breakfast, Cajun and Creole dishes and classic American comfort food.

I’ve had Brielle’s Bistro on my radar for quite some time. If you’ve read my column for a while, you know that I’m always looking for some great Acadian food, which includes both Cajun and Creole dishes. Both use similar spices and are often confused, but Creole dishes are more refined and are more “city,” while Cajun is a little more “country,” as Brielle’s website explains.

I took the scenic route and stayed on 23rd Street nine miles until I arrived at Brielle’s, which is located in a strip mall just east of a Walmart Supercenter.

I arrived just before 1 p.m. and was delighted to see the restaurant entertaining a healthy weekday lunch crowd (the restaurant is closed Mondays), but they still sat me in a booth swiftly.

The important thing to me is to have seafood stock or flavor throughout the dish, which Brielle’s delivered. tweet this

The decor leans heavy on a Mardi Gras theme, with plenty of purple, gold and green, which all have meaning for the holiday. Purple represents justice, green is for faith and gold is power.

The restaurant recently added full liquor service to its offerings and has a few signature cocktails. There is the Cajun Lemonade ($7.50) that mixes lemonade with rum and some Tabasco for an extra kick and Mardi Gras Madness punch that blends grape, pineapple vodka and a splash of Sprite. It also offers a hurricane, bloody mary, margarita, Long Island iced tea and mimosas.

The worst thing about Brielle’s Bistro might be the decision process. You have to decide if you want breakfast, Acadian or classic American food. The appetizers offer some intriguing options like crab beignets ($10.99), alligator bites ($11.99) and Gulf Coast crab queso ($8.99). I almost pulled the trigger on an order of lemon pepper wings but decided to order two entrees instead.

Brielle’s top-selling items are its freshly fried catfish ($7.99) and gumbo ($7.50) while its Seafood Pastalaya ($11.99) and blackened pork chops with Cajun mushroom sauce ($10.99) are also strong contenders.

When I was there, it also had a special of surf and turf pasta that had shrimp, crawfish and steak with peppers and onions in a cream sauce. 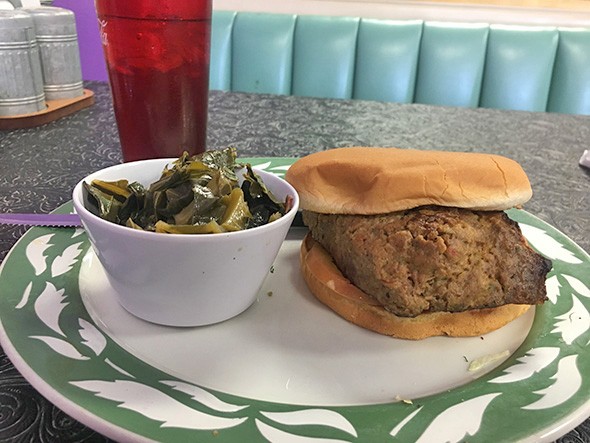 I ordered crawfish étouffée ($7.50) and a meatloaf sandwich ($7.99) with a side of collard greens, two dishes that I’ve ordered at restaurants in prior reviews, and they more than held their own, if not exceeded other versions.

Étouffée is one of my favorite dishes in the world, especially when combined with crawfish, which are delectably in season right now. The étouffée at Brielle’s is a little bit different than the version I make at home but altogether still very tasty. I generally sauté and blend the holy trinity (onions, bell pepper and celery) before adding it to the roux, but Brielle’s serves the dish with the peppers and onions chopped for extra texture. It really doesn’t impact the final taste of the dish because all of the ingredients are in the final product, and the important thing to me is to have seafood stock or flavor throughout the dish, which Brielle’s delivered. A few dashes of Louisiana hot sauce and I was in the perfect spot, especially when paired with a nice dollop of rice and toasted French bread.

Brielle’s offers its étouffée topped on blackened catfish for $10.99.

I’m something of a meatloaf connoisseur. Where others might turn up their noses at the dishes that were likely overcooked by a family member or school cafeteria staff, I see the perfect opportunity to blend multiple meats for a succulent dish that is more than the sum of its parts. I’ve had meatloaf at Metro Diner and Polk’s House in this review space before, and Brielle’s version blew past them like beads whizzing past your head from a Mardi Gras float.

The meatloaf portion in the sandwich was huge and topped only with slices of tomato and pickle. I could tell they used different meat in the mixture (using only beef tends to dry out), and it was well-mixed and seasoned and then grilled on the flattop. I added some ketchup and hot sauce to the sandwich and intended to take half of it home but finished it after I cleared all of my plates.

Brielle’s Bistro is well worth the trip to Midwest City because whatever you might spend on gas is returned in its menu prices, which are extremely affordable, considering it’s serving fresh seafood. I look forward to making it part of my regular rotation and taking visitors to the area in search of some great Cajun and Creole dishes.