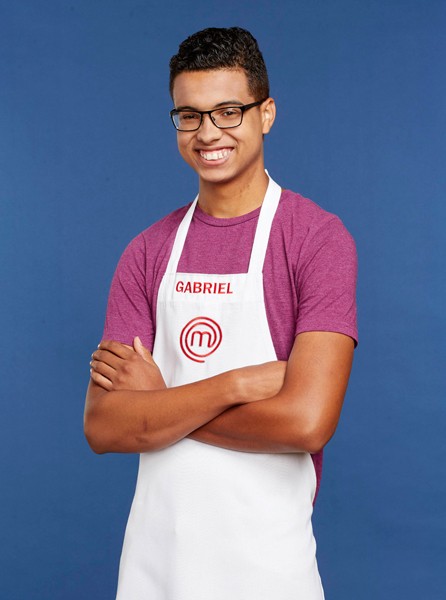 “It’s the first time I’ve ever been able to say I was starstruck,” Lewis said.

Lewis, a 19-year-old who graduated from Putnam City North High School in 2015, has seen Ramsay countless times on the chef’s many reality television shows, including the popular Hell’s Kitchen and MasterChef series. That made it all the more surreal when he saw him with his own eyes as a MasterChef contestant.

The studio lights were bright on Ramsay and the show’s other judges — Christina Tosi and Aarón Sanchez — the first time Lewis presented one of his dishes for tasting.

“They’re almost glowing, so I was baffled thinking, ‘I’m 15 or 20 feet away from someone I’ve idolized since I was 10 or 11 years old,’” Lewis said in a recent Oklahoma Gazette interview. “It’s remarkable for me to be able to cook for him — I was speechless.”

If there is a show out there starring Ramsay, you can bet Lewis is a fan.

“I watch anything Gordon Ramsay,” he said. “I’ve been watching MasterChef since the first season.”

MasterChef intrigued Lewis from its initial season in 2010 largely because of its unique openness to home and amateur chefs.

When Lewis or another contestant wins this season of the show, they will be rewarded with $250,000, their own cookbook and a MasterChef trophy.

The show held open casting calls March 2016 in Oklahoma City. Lewis said his sister found a post about the auditions online and encouraged him to look into it because he was such a fan. Lewis said he is a longtime believer in stepping out of one’s comfort zone and taking risks, so it did not take much convincing to register for the call.

As part of his audition, Lewis had to prepare a signature dish for judges on-site. Lewis, who enjoys a cooking style influenced by several Asian cuisines, made a crispy Japanese-style pork belly with pea shoots and a red wine reduction. He tried not to let nerves get to him.

“I just decided I’m not going to do anything different,” he said. “I’m just going to go into the kitchen, do what I love to do, which is cook, and come out with a dish that is worthy of MasterChef.”

When Lewis heard he was selected to be on the show, he said he was not overly surprised. His family believes in the power of positive thinking. As Lewis said, “What one thinks about comes about.”

“I honestly just started laughing [when they called me],” he said, “because it’s something I set in my mind as a goal.”

Lewis first became interested in cooking at age 7 or 8. His grandmother and mother both cooked a lot. Family holidays and birthdays were always huge food events. The love, patience and time they both put into their food came through in the flavor.

Lewis said his dad had a stroke when he was 11. As his father was limited in what he could do, Lewis felt like he needed to help around the house more, so he volunteered to prepare family meals.

“That made that fire turn into a big inferno,” he said. “It grew from there.”

Everyone has a favorite dish that someone in their family makes. For Lewis, it’s his mother’s fried chicken. He said he has not had anything that is remotely comparable to her recipe.

“It’s so simplistic,” he said. “There’s limited ingredients in it and it’s so simple to make, but I can’t replicate it. All I can think is the amount of love, time and patience that my mom puts into it that changes it and makes it nostalgic for me.”

Lewis said his personal specialty is salmon in any and all its variations.

“I can prepare it eyes-closed with my hands tied behind my back,” he said.

Despite his youth, a love for family and cooking gives Lewis a strong sense of nostalgia. For him, cooking is more than a hobby; it is an important part of his identity.

Lewis is constantly amazed at what certain flavors can trigger in his mind.

“I love going back and experiencing memories I thought I forgot,” he said. “That, to me, is remarkable. Food has the power to bring back something you thought was lost in your mind.”

Lewis said MasterChef pretty accurately portrays what happened during filming in each episode. He also said he formed many authentic friendships with the show’s other cast members.

“Being together with a group of people who all share your same interests — even though you’re all competing for one thing and know you’re going to have to go against each other — you become remarkably close just because of the interest and passion you have for food,” he said.

We do not yet know whether Lewis will take home the $250,000 prize as MasterChef winner, and he is contractually bound from sharing results of the show before they have aired. However, win or lose, he sees the show as an opportunity to better himself.

“My cooking ability and knowledge has grown exponentially,” he said. “MasterChef is not just a competition; it’s a way to learn. You’re growing by being around these incredible chefs who have put time and energy into learning their craft. They’ve mastered that over time, and they’re passing it on to the contestants.”

Nancy’s 57th Street Lighthouse, 5708 N. May Ave., and Francis Tuttle Technology Center, 12777 N. Rockwell Ave., have been hosting Wednesday night MasterChef watch parties, where Lewis watches along with an excited crowd. He is still adjusting to seeing himself on the TV screen.

“I’m not used to hearing myself or my speech patterns or the quickness in which I speak,” he said. “I didn’t know that I spoke so quickly.”

Lewis said his family has been very proud and supportive of him throughout the show’s run. Their approval means a lot to him because he owes his cooking interest to his upbringing. That is why it doesn’t bother him to have them as his biggest cheerleaders.

“Honestly,” he said, “they pretty much promote me on their own because they talk about it so much.”

Past episodes of MasterChef’s current season can be seen on Fox’s website with a cable or online subscription and on Hulu, YouTube, iTunes and other online outlets.