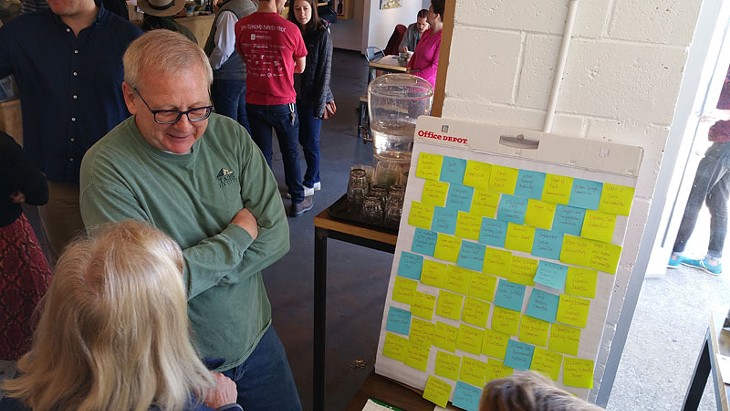 Civic love was in the air at Elemental Coffee on Valentine’s Day as dozens of residents showed up for an event promoting increased involvement at city hall.

On display was a listing of Oklahoma City boards and commissions, along with other information on getting involved in city government. The event was hosted by Better Block OKC and called Love Your City.

“This is great and exactly what we need to see,” Councilwoman Meg Salyer said during the drop-in event Saturday morning. “For many of us [on the council], this type of serving on these commissions was how we got started.”

Some councilors and city officials dropped by to show support for the event that was especially geared towards a younger generation of Oklahoma City residents who have become engaged in community development and events, but not as much with civic and local government matters.

Kelsey Wolfley stopped by Elemental to buy some coffee beans and ended up talking with Love Your City volunteers. Wolfley submitted her contact info to receive more information about ways to get involved at city hall.

“We’ve been driving around this morning and seeing all that’s been developed,” Wolfley, 24, said. “It’s interesting and I think it would be cool to be a part of it.”

While the event was hosted by Better Block OKC, a grassroots organization that seeks to advance place-making in the city, there were several city official on hand, including a representative of the mayor’s office who offered the mayor’s support for helping promote involvement in commissions and boards.

Elemental Coffee is in the heart of Midtown, a neighborhood that has been transformed over the past few years and hosts several events like H&8th that draw thousands of residents. While those types of community events have become very popular, involvement in civic matters has been a missing element, Better Block OKC volunteers said.

“If we can just blur those lines between community and civic engagement, that will make a difference,” said Shane Hampton, one of the volunteers.

Nearly 50 residents signed up for more information on serving at city hall and volunteers said they hoped to do more to encourage civic engagement, including creating information guides for how city government works.