Oklahoma Shakespeare in the Park bookends its women-centric season with A Midsummer Night’s Dream and Richard III. 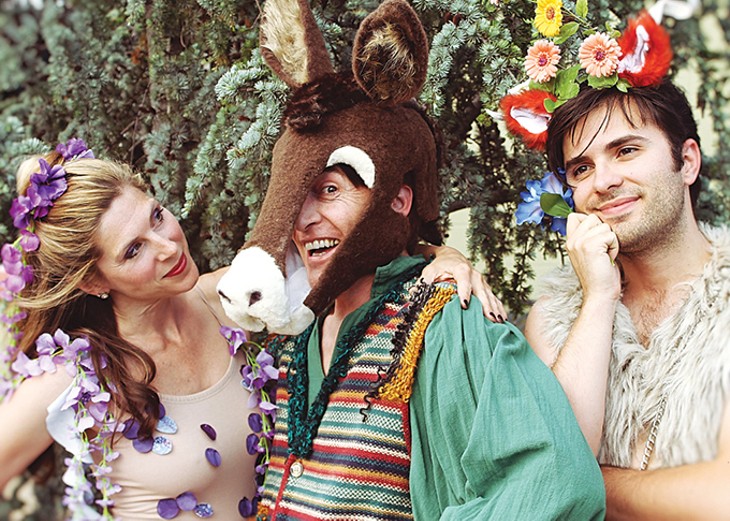 To quote the Bard, Oklahoma Shakespeare in the Park’s 34th season starts with “love’s stories written in love’s richest books” and ends in “grim-visaged war.” Season opener A Midsummer Night’s Dream, a romantic comedy, is scheduled Thursday-June 23 and season finale Richard III, a story of brutality and betrayal, is scheduled Sept. 13-28, both at Myriad Botanical Gardens, 301 W. Reno Ave.

“We’re starting this season with love triumphing and fun, and then we’re ending the season with historic tragedy,” said Kathryn McGill, the company’s artistic director. “Although Richard III has got some funny aspects to it, Richard III is probably one of the most diabolical characters that Shakespeare ever wrote.”

But first, the love story: A Midsummer Night’s Dream, possibly Shakespeare’s best-known comedy, features many often-quoted lines and several of the author’s most commonly used tropes, including mistaken identities, a play-within-a-play and star-crossed lovers, though Hermia and Lysander’s ending is much happier than Romeo and Juliet’s. Since its founding, Oklahoma Shakespeare in the Park (OSP) has produced the play several times.

“This is not our first go-round with Midsummer,” McGill said. “It tends to be one of our most popular plays. ... We did it our first season in 1985, and probably every six years, we roll it out again because the patrons love it. ... It’s a great play if you’ve never seen Shakespeare to come see that one first. … It’s kind of a play that everybody likes, from kids on up to their grandparents.”

Though the theater company has staged it several times, McGill said every production of A Midsummer Night’s Dream has been a unique experience.

“Every time, we look at each Shakespeare play as if it’s never been done before,” McGill said. “We like to look at it with fresh eyes and a fresh director and a different cast so it always is different.”

The play has inspired everything from animated adaptations and an Elvis Costello-scored ballet (Il Sogno) to Woody Allen’s A Midsummer Night’s Sex Comedy (1982), but McGill said OSP’s most recent version of the play takes a more traditional approach to the concept while making a few modern tweaks.

“We’re not setting it on the moon,” she said. “You know, you can go so many different ways with this play, and I think it’s been done probably any way you can think of it being done. We never try to give a historical rendition of what we think Shakespeare meant the play to be; we try to look at the play in a contemporary way. Patrons will see some contemporary, anachronistic things in the play, which is always fun. We try to do a sendup of contemporary things in the play, which I think audiences love.”

After Midsummer finishes its run, OSP will take a two-play break from their namesake playwright, beginning with Lauren Gunderson’s The Revolutionists July 5-21 at the theater company’s Paseo studio.

“We’ve always done other plays besides Shakespeare,” McGill said. “What we’re interested in is the spoken word and language, so that’s kind of our grounding. He’s our lodestone. He’s our talisman. He’s what we use as our jumping-off point, but we enjoy other plays that have heightened language like Shakespeare or that just look at classical themes in a different way.”

The Revolutionists imagines a fictional meeting between historical women during the French Revolution: Marie Antoinette, playwright Olympe de Gouge, assassin Charlotte Corday and Marianne Angelle, a composite of several Caribbean revolutionaries from the time period. McGill said Gunderson, who American Theatre magazine declared the most-produced playwright of the 2017-18 season, has written the women as “four kind of archetypal female characters” who argue about the politics of rebellion and social change.

“She’s taken the French Revolution and kind of spun it on its head,” McGill said. “It’s really about feminism and revolution and how far you go to make change. … It’s funny. It’s dark but it’s not too dark. It makes you think. It’s one of those thoughtful plays where you go, ‘Oh, wow. That was clever.’”

OSP will follow The Revolutionaries with another female-driven comedy, Kate Hamill’s 2014 adaptation of Sense and Sensibility, August 9-25, also presented at the Paseo studio.

“It’s true to the novel, so people who love Jane Austen and love her novels will love the play,” McGill said, “but it’s also a play that really highlights Jane Austen’s humor. I think people think of Jane Austen as being more romantic, but Jane Austen was a keen satirist of the time period she was living in and about how women were forced into marriage. Our whole idea of marriage and love and all of the things that we take for granted, back in the day, you had to get married for many reasons, not just love. So she really is a keen observer of that time period and of women in that time period.”

“Both of the plays in the middle [of the season] are very, very funny and by female playwrights,” McGill said, “and yeah, we did that on purpose.”

This season’s final play, Shakespeare’s Richard III, though also darkly comic at times, finishes off the season on the “opposite extreme” of the tone set by Midsummer, McGill said. Based “very loosely” on English history, Richard III chronicles the cynical, treacherous machinations the British king uses to ascend to the throne and his subsequent short and bloody reign.

“He’s the hero of the story. He’s the main character,” McGill said. “You see it from his point of view, and Shakespeare writes a very charming character. … It’s just a fascinating study of someone who wants power and goes about some really heinous actions in order to get the power.”

Murderous monarchs aside, women will hold center stage for much of the 2018 season, even starring in some roles typically played by men, flipping the script entirely on the rules of theater in Shakespeare’s day.