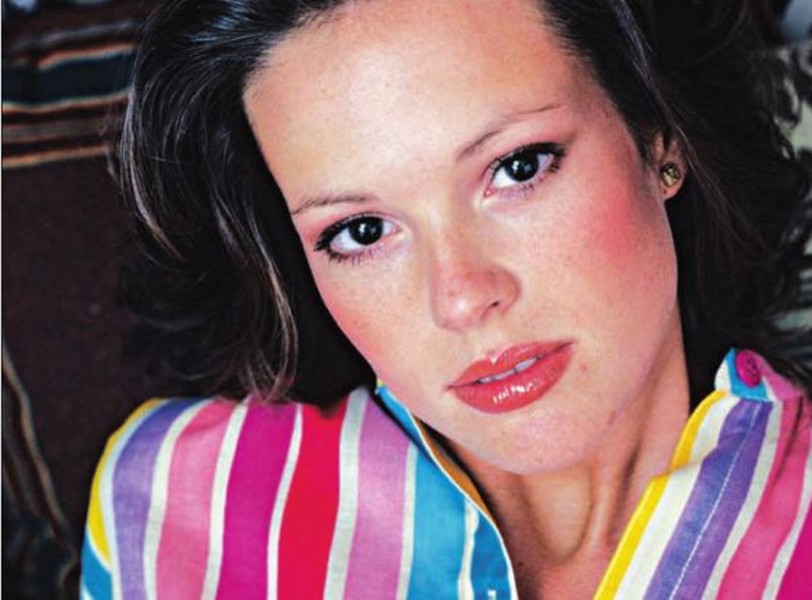 Although born in Kansas in 1956, she moved to Oklahoma at age 3. After graduating from Ponca City High School, she pursued a journalism degree at the University of Oklahoma in Norman.

And it was there, at the urging of her then-husband, that Candy Loving became a sex symbol.

From class to centerfold
See, before the Internet, before reality TV, American found its sex symbols in the pages of Playboy magazine: Marilyn Monroe, Jayne Mansfield, Bettie Page. Preparing to celebrate its first 25 years, Hugh Hefner’s publication embarked on a yearlong, nationwide Great Playmate Hunt in 1978, seeking Someone Special to be crowned its silver Playmate.

In Norman, Playboy reader Ron Prather told his spouse she should try out for it.

“He’s the one that tried to talk me into going ahead and entering the contest,” Loving told Associated Press later that year. “He’s very much behind me. He’s very excited.”

To make a long story short, she set her public-relations studies aside long enough to take some swimwear shots. Shortly thereafter, at 414 pages, the 25th-anniversary issue of Playboy hit the stands.

While the cover read “January 1979,” it was the centerfold inside that mattered, introducing the world to OU student Candy Loving: age 22, 5-foot-7, 110 pounds, 37-24-34, loves Dracula and Steely Dan, turned on by Walt Disney and ice cream, turned off by violence and braggarts.

Beating more than 3,500 applicants for the honor and $25,000 paycheck, the student with girl-next-door looks, God-given curves and a name befitting one of 007’s lovers charmed the pants off America.

At home, The Daily Oklahoman reported that law-enforcement officials had deluged the state Department of Safety with requests for Loving’s home address — an “unfortunate abuse” of the system, said Lt. Bob Carlton.

Her pictorial made her a star, so she took advantage of it, and soon landed roles on a forgettable NBC series and in Woody Allen’s Stardust Memories.

After all, as she would tell The Boca Raton News, “A lot of friends told me, ‘You’re only young and hot once.’” But then she dropped out of the public eye, on purpose.

“In 1979, I went out to California and I lived and modeled and did a little acting,” Loving told Oklahoma Gazette. “And it took me a couple of years to go, ‘You know, this just really isn’t me.’” And that is where is our real story begins.

A sweet career
In 1981, Loving returned to OU. Finishing her degree at age 25, she entered grad school to study human relations.

“And
it took me a year of that to realize I didn’t want to do that with my
life, either,” she said. “A lot of starts and changes, and I guess
that’s how all young people do, don’t they?”

Her marriage to Prather
having ended in the wake of the Playboy wave he had pushed her
toward, Loving met Tampa Bay Buccaneers offensive lineman Dave Reavis at
a beauty pageant they were judging, and followed him to Florida in
1983.

Although he’s no longer in the picture, she remains in Southern Florida today.

“This
isn’t interesting or sexy at all, but I’ve been working in the health
care industry for 27 years,” Loving said. “I actually was able to
transition very easily into a good job. I had the attitude that I had
used my looks to do some fun things and see the world. I’m glad I did
it, but I thought, ‘There’s more to me than that. I want to use my
intellect, too.’”

So instead of appearing at car shows as she did in her
Playboy heyday, she now helps companies design benefit packages to their employers,
including health, dental and disability.

“It’s not real exciting [to
others], but I think it’s fun,” Loving said. “I love it, because I’m
always learning and meeting new people. It’s not boring to me.”

She’s
unmarried, but is a proud mother of one daughter who will graduate
college in May and is A-OK with Mom’s ongoing au naturel fame.

“She
thinks it’s pretty cool since she found out Jakob Dylan [of The
Wallflowers] had a Playmate mom, too,” Loving said. “My daughter’s very
much her own person, and [posing nude] is not something that she would
ever consider doing, but she’s pretty wise for her years. She understands that it was a pretty cool experience for me.”

Although nearly 35 years removed from folding out of Playboy’s largest issue in history, Loving finds herself indelibly linked to those times.

Occasionally
recognized, she attends Playboy Mansion parties, Facebooks with fellow
Playmates — “sort of like its own unique sorority,” she said — and still
receives her share of fan mail.

“The
other day, I received a letter from a guy in the armed forces,” she
said. “He said I had gotten him through the Gulf War. He was quite the
gentleman, and it really brought tears to my eyes. There are a lot of people in other countries working for our country for who Playboy is a link to home for them.”

Happy ending
Speaking
of home, she returns to Oklahoma “faithfully,” two to three times a
year. Although her mother passed away a year and a half ago, Loving
still has other family members residing in the Sooner State.

“I’ve
enjoyed being able to show my daughter where I grew up,” she said, “and
in my heart, that’s my home. I do miss it. That’s why I go back.”

Yet she’s quite happy to live in the present, and pleased with her Playboy past, preserved by untold numbers of downloadable JPEGs.

“I’m
not ashamed of it. It was a wonderful part of my life,” she said. “It
rounded out a lot of things for me. I was able to travel a lot and see
things I probably wouldn’t have.”

As for the future, Loving hopes for her “happily ever after.”

“My
main goal was to raise a good, healthy, happy child, and I’ve done
that. I’ve gotten her into adulthood,” she said. “So now I’m just going
to take it one day at a time and see where I want to go. I’m in a pretty
good spot. I can be flexible.” —Rod Lott