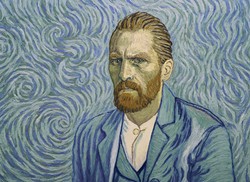 A team of 125 highly trained animators worked more than six years to paint each individual frame of Loving Vincent in the style of 19th-century Dutch Post-Impressionist master Vincent van Gogh.

The least any of us could do is go see the finished product.

The 2017 film was written and directed by Dorota Kobiela and Hugh Welchman. Initial development began in 2008. To fully understand van Gogh’s life, Kobiela and Welchman read 40 different publications about the artist and visited more than a dozen museums in six countries to view around 400 of his paintings.

Saying a significant amount of work went into making Loving Vincent a reality would still be underselling the colossal scope of the project.

In terms of plot, the film begins in France the year after van Gogh’s death by suicide. Armand Roulin, the mostly apathetic son of postman Joseph Roulin, is asked to deliver what would be the last letter from van Gogh to his brother, Theo van Gogh, in Paris. Vincent and Theo had a great relationship and wrote often. (Vincent often ended letters with the valediction “Loving, Vincent.”) Armand only agrees to deliver the letter when his father asks him if he would want to read his friend’s final letter — or moreover — his own father’s.

When Armand arrives in Paris, he soon finds out that Theo, who was sick at the time of his brother’s death, died not long after Vincent. In speaking with van Gogh’s paint supplier Père Tanguy, Armand learns more about van Gogh’s relationship with his brother and the artist’s quick rise from aimless burnout to Parisian art sensation. Armand finds the story very intriguing and is eager to learn more about why someone on the brink of success and fame would end his own life.

Armand leaves Paris to visit van Gogh’s doctor Paul Gachet in the nearby village of Auvers-sur-Oise. Gachet spent much time with the artist in his final weeks, but he is out of town by the time Armand gets there. While waiting for his return, Armand visits with several people in the village and stays at the inn where van Gogh spent the last 10 weeks of his life.

Everyone he talks to in the town seems to have their own theory for the reasoning behind van Gogh’s suicide. Armand struggles to navigate through the various narratives and motives to find the truth before eventually getting his highly anticipated meeting with Gachet.

The characters within Loving Vincent are almost all people whom van Gogh had painted in the final years of his life. Several of the artists’ actual paintings are referenced within the film.

Live actors were shot against van Gogh-esque backdrops and green screens for artists’ reference. To properly tell the story, some flashbacks were used the show a time from before van Gogh began his prolific artistic output. To show the distinction, these flashbacks are shown in black and white.

The visuals within Loving Vincent are obviously the star of the show. Completing all the frames required for just one second of film took artists as many as 10 days. There is already so much motion and fluidity within van Gogh’s brushstrokes that it is captivating to see his worlds truly come to life. Aside from being an impressive feat of visual art, Loving Vincent succeeds as a genuinely interesting and relatable look into van Gogh’s life and death. It can be hard for the average person to get excited about the life of a historic figure — at least when that story is told in the traditional textbook or monotone documentary style.

Loving Vincent transforms van Gogh from a historical topic of study to a breathing, thinking person with real talent and an equally real struggle with mental health. This is a movie that will highlight art history classes for decades to come.

Obviously a lot of work went into finishing the film, and it is clear that the filmmakers accomplished what they set out to do. In that sense, Loving Vincent was worth the work. However, audiences that go in to see the film should not expect to be wowed in the same way they have been with intensively made blockbusters of the past, like James Cameron’s Avatar. Loving Vincent is best appreciated like van Gogh’s oil paintings, a way that requires quiet reflection and a respect for artist vision.

It is also recommended that one see the film in a theater for a full appreciation for the work that went into it. The gist of the project can be ascertained on a laptop computer or home television, but its full beauty and scope demands a large projection.

Fans are no doubt drawn to the film to experience a once-in-a-lifetime artistic achievement and a tribute to one of art history’s most beloved masters. But while watching, they will find a story with surprising contemporary relevance. Van Gogh is often cited for being the insane artist who cut off his ear, but in an era when we are beginning to understand mental illnesses in a new way, Loving Vincent finally brings some humanity to his art and legacy.