After a lofty start, cannabis prices in Oklahoma are coming down to earth.

Six months after dispensaries were legally allowed to sell products containing THC to patients, the prices of grams of cannabis flower are steadily dropping.

When some businesses opened their doors Oct. 26, prices per gram reached up to $35 at some locations. They quickly dropped, settling around $20 a gram for flower through the end of 2018.

In the first months of 2019, those prices slowly scaled down, with fewer stores charging $20 a gram or more by the beginning of May.

The average price for a gram in Oklahoma City is now between $10 and $15. With some dispensaries including all taxes while others do not or roll a portion of those taxes into the price, there is still some uncertainty for patients what they will pay at the door.

At the same time, a number of dispensaries — both those who have been in business for months and those just opening their doors — are offering cannabis flower below $10 per gram.

In the first week of business, it offered three tiers of flower from the same grower at $15, $12 and $8 per gram.

President and CEO Ford Austin said APCO will not consider purchasing flower that has not been lab-tested and for which a complete terpene profile is not available.

“We’re able to work together to make it to where I can give the prices that the patients can afford because having a $20 top-shelf gram is not affordable. The cost breakdown basically is determined by three major factors. One of those factors on the low end is THC content. That determines a little bit of the price. But that’s not everything. It’s how it’s grown, the conditions in which it’s grown in: hydroponic, soil or even aquaponic. That determines pricing because each of those tiers is more expensive. And the third one is what I’m able to buy it at. If I have a vendor come in here and say, ‘Hey, I have really good flower. Here it is.’ And I’m like, ‘Yeah, you have really good flower,’ and he says it’s $3,000 a pound, that’s not conducive for me to be able to give it to patients at a reasonable price. The growers have to realize at some point — which the market will dictate — that their prices have to come down. There are so many factors that determine price of flower, but what it really comes down to: Is that grower good enough and organized enough and good enough at business to grow that great strain and be able to charge $1,800 pound for it?”

“How are we able to do $8 grams? Well, the simple thing comes down to greed,” Austin said. “It’s just greed. And other companies have decided to charge what they feel they can get in a burgeoning startup enterprise in a new state. And you know, they’re not going to be able to do that for very long. It’s just like you have to figure out how to follow the trends of every other state, where they’ve gone, and stay ahead of it. So if you’re going to charge $8 a gram and the guy next to you is going to charge $12 a gram, well, he’s not going to be able to sell that for very long because people are going to come over, especially if it’s good quality. And just trying to figure out how to get the good quality is really all that matters.

Gaia’s Favor opened its doors last year and have been selling cannabis flower since the late fall. It grows its own flower and coordinates with one other grower. In doing so, it was able in March to start offering three strains at $7.65 per gram, which works out to $8.85 after taxes. 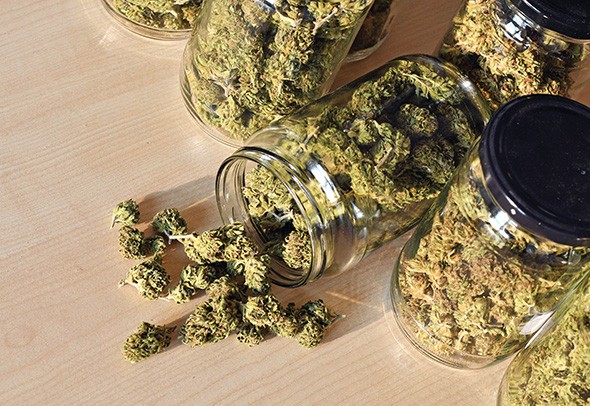 “It’s not much of a profit by the time you add in the cost of the flower, the labor and everything. We just about break even on it. You’re adding in the cost of the bottle and everything. We’re not losing money on it, but we’re not making anything,” co-owner Chris Carson said. “You build that loyalty with your customer base and they know they can get good stuff at a reasonable price and they like to come in, they like to look at it, we let them weigh it out themselves and they take ownership of that flower they picked out. ... It makes the whole process much more enjoyable.”

The strains it chooses to offer for $7.65 are not based on quality or quantity but are selected on a revolving basis.

“Some flower is higher than others when we buy it, but we rotate it all in and out,” Carson said. “It gives everybody an opportunity to sample what they like and if they like it, when it goes off sale, they’ll pay the price for it. The amount of people coming through the doors, it’s increasing. It’s probably from what we’re doing in here, and some of it’s more and more people getting a license every day. It’s a combination of both, and word of mouth. People really appreciate the customer service that we give them — not just the prices, but the fact that everyone that walks through that door, we treat them like family.”