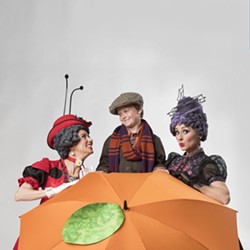 For over a half-century, Roald Dahl’s James and the Giant Peach has enchanted children (and adults) in book form. Lyric Theatre of Oklahoma’s production lets audiences see the story unfold like never before.

Co-produced with Adventure Theatre in Washington, D.C., James and the Giant Peach runs Thursday through April 9 at Lyric at the Plaza, 1725 NW 16th St.

Lyric’s production features the same set and costume designers and choreographer but a different cast.

Michael Baron, who has worked with Lyric for seven years and is now its producing artistic director, previously lived in Washington, D.C. He received a 2016 Oklahoma Governor’s Arts Award for his work on Lyric’s Fiddler on the Roof, which incorporated American Sign Language (ASL).

Lyric, in partnership with Autism Oklahoma, likewise presents James and the Giant Peach to audiences with sensory conditions such as autism or Asperger’s syndrome, Baron said.

For its sensory-friendly shows, Baron said Lyric removes potentially irritating lighting cues that involve flashing and lowers the show’s volume, especially any loud sound effects. Baron also said that ushers are positioned at the front of the theater with glow sticks to indicate when applause will happen after musical numbers so parents can cover children’s ears, if necessary.

Other accommodations include a quiet room with James and the Giant Peach-related coloring books and activities and a space in the back of the auditorium where guests can move around as they watch the performance.

Baron said Lyric’s goal is to make children and parents “as comfortable as [it] can when they come see the show.”

With a run time of an hour and 15 minutes, Baron said the show provides the feel of a “big Broadway musical” in a shorter time period.

The production also offers free and discounted tickets to low-income students via subsidies created by grants from National Endowment for the Arts (NEA) and Oklahoma Natural Gas (ONG).

“Through the NEA, we were able to provide free tickets for students, particularly from Positive Tomorrows, which is a school for homeless children,” Baron said. “The idea is to make the show as accessible to as many families, regardless of income and ability to pay.”

James and the Giant Peach presents Dahl’s quirky story in innovative ways. As orphaned James tries to evade his malicious aunts, he encounters magical insects and a very special fruit.

The production’s artistic design is inspired by curiosity cabinets, and Baron said he and the set designer decided to create a “mini British Museum.”

As for the titular peach, Baron and his team circumvented a potential theatrical challenge through an inventive technique.

“When it came down to the peach, we decided it would be fun to create it out of orange umbrellas,” Baron said. “It starts out as one umbrella, but as the peach grows, we add more and more.”

Anderson is an actor, singer and private voice instructor who has appeared in several Lyric productions. Having previously worked with Willis on a Lyric production of The Wizard of Oz and with several other cast members on past projects, Anderson said she looks forward to coming together on James and the Giant Peach.

She read Dahl’s book “eons ago” and thought the project seemed fun. After researching Spiker, whom she describes as one of James’ “atrocious aunts,” Anderson reached a conclusion.

“I actually really enjoy playing villains,” she said. “Growing up, I didn’t want to play the princesses.”

She said she not only examines the motivations of her own character, but everyone else’s.

“We all play off of one another,” she said.

Despite the darker elements of James and the Giant Peach, the show highlights chosen community as a positive, essential element.

“The main point of the story is, How do you create a family that is nontraditional?” Baron said. “It’s a very sweet story. We all make our own families as we go through life.”

Life might not always be peaches and cream, but James and the Giant Peach aims to show as many people as possible just how sweet it can be.

James and the Giant Peach