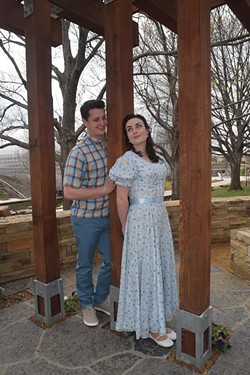 The world’s longest-running off-Broadway musical is about to make its Lyric at the Plaza debut.

The Fantasticks, written in 1960 with music by Harvey Schmidt and lyrics by Tom Jones, tells a tale of a timeless and innocent romance that has captured audiences’ attentions for decades. April 6-24, Oklahoma City theatergoers can enjoy the production at Lyric Theatre of Oklahoma, 1727 NW 16th St.

The show has become a staple in theaters around the globe. During The Fantasticks’ 50th anniversary in 2010, an article in The New York Times said since the production began, there had been 11,000 renditions in 3,000 cities in the U.S. and 67 countries.

Ashley Wells, director of the Lyric production, said part of the reason behind the show’s incredible run has been a relatable story. The Fantasticks tells of a budding romance between Matt and Luisa, fueled by their tinkering fathers.

Borrowing from elements of Romeo and Juliet, the two men pretend to quarrel as a way to bring their children together. Unsurprisingly, things go wrong.

Wells said many people can find some version of their younger selves in Matt and Luisa.

“I think it is just such an innocent, sweet love story that we have all gone through and felt,” she said. “There is that reminiscent feeling.”

He said he could not have asked for a better show to start out in.

“I’m pretty excited to be working with this kind of talented cast and this talented director,” he said. “It’s just going to be something I’m going to remember for the rest of my life.”

Walker, a New Jersey native, said she appreciates how many theater companies in Oklahoma are willing to work with college students, giving the young actors a chance to pick up skills at the professional level. 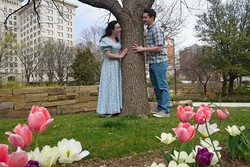 Many will be able to relate to The Fantasticks story, but crowds also come for the familiar music. The song “Try to Remember” was popular enough to make the Billboard Hot 100 in 1965.

“I think my grandmother might be singing along in the audience,” Walker said.

Stukey said he is cautiously excited about performing beloved songs in front of an expecting crowd.

“It adds a little bit of pressure too since everybody knows the lyrics,” he said. “You can’t forget the words or anything like that.”

Wells said her vision for the show is to simulate the appearance of a bare-bones Shakespeare in the Park play. She said for the set they’ve created a gazebo with tree branches brought in from the outside and a soundscape that will make it sound like a park.

“I’m excited about the feel and the experience, hopefully, that our audience will get when they first walk into the Plaza theater,” she said. “It’s nothing like we’ve had on that stage before.”

Most of the theater’s shows are heavily local, but this one especially is. The Fantasticks isn’t bringing in any actors from out of town. The set was designed all in-house — nothing was rented.

Even the tree branches used for the set have hometown ties, as loose limbs littered Oklahoma City streets in the aftermath of last winter’s ice storm.

“We went shopping on the side of the road for sticks, so you might see local trees in the theaters,” Wells said.

There will be plenty of opportunities for the cast to come together during the production’s run. Walker called The Fantasticks a true ensemble show.

“There’s so many different little bits that we all get to do together,” she said. “I think it’s going to be really fun to develop that cast dynamic.”

Stukey hopes their performance bring audiences closer to them as well.

“I think there’s so many things in it and about it that we, as people, can relate to and connect to,” he said. “I think that’s kind of the essence of theater in general, to find a way to connect to the material and to feel things because of the material.”

Print headline: Fantastick force, Lyric Theatre of Oklahoma presents its own take on the undying off-Broadway musical The Fantasticks.