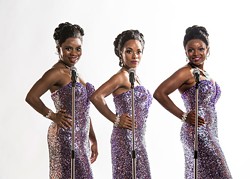 Since it debuted on Broadway in 1981, Dreamgirls has become one of the greatest musicals of all time and earned multiple Tony Awards. Part of Lyric Theatre of Oklahoma’s summer season, it runs Wednesday-Saturday at Civic Center Music Hall, 201 N. Walker Ave.

Written by playwright Tom Eyen with music composed by Henry Krieger, Dreamgirls tells the story of fictional girl group The Dreams on the rise in 1960s Detroit. Largely inspired by the showbiz aspirations of Motown acts like The Supremes and The Shirelles, the show traces the highs and lows that accompany achieving one’s dreams.

The story centers on full-figured lead singer Effie White and the heartache she endures after being reduced to a background singer with Lorrell Robinson by the more “photogenic” Deena Jones. The show is filled with emotionally charged musical numbers, and the plot is rife with record executives, rival musicians and romantic entanglements. Actress Tiffany Mann, who portrays White in this production, was very aware of the daunting task ahead of her when she signed on to perform the iconic role.

“Effie White is a huge undertaking, so I had to roll up my sleeves and get ready to do some work to find my own version of who she is,” Mann said. “I feel that we all can relate to Effie in some way. That’s why audiences are so drawn to her. Dream, obstacle, revelation, triumph — we’ve all been there.”

In fact, that sense of readability is at the heart of Dreamgirls’ endurance. The show has been featured on Broadway, toured across the U.S. multiple times and just this year premiered in the West End. It was made into a film in 2006 starring Beyoncé, Jamie Foxx and Jennifer Hudson. Hudson gave an Oscar-winning performance as Effie.

The musical has a special appeal that keeps audiences — as well as casts — coming back. Dreamgirls was the first show that Kristina Love, who plays the sweet-natured Lorrell, acted in professionally; she was 16 years old. The show represents a milestone that strikes an emotional chord in her life.

“The story is timeless because there are so many universal themes within the show,” Love said about the show’s depiction of fighting for one’s dreams and finding redemption for mistakes. “It is applicable to every human being in some way, regardless of age, color, upbringing. It is a story which offers an authentic portrayal of matters that lie in the heart of every human being.”

Kyle Taylor Parker portrays James “Thunder” Early, a raucous performer inspired by soul legends like Marvin Gaye and Jackie Wilson. With a recent stint on Broadway playing Lola in Kinky Boots, Parker is hardly a stranger to the stage. But even he admits that Dreamgirls is something special, a musical just as timely today as it was when it debuted.

“As an artist of color in the entertainment industry, I can’t help but relate to James,” Parker said. “While a lot has changed, there are many themes in the show that are still challenges when it comes to being black and building a career in the music world.”

Cast members have worked hard to ensure the production resonates with audiences just as much as it does with them. With only two weeks from the start of rehearsals to opening night, actors formed relationships quickly and had a blast stretching their creative muscles.

“The beautiful thing about a short rehearsal process is you challenge your brain in a way that you don’t normally work it in doing eight shows a week every day,” Love said. “It makes the experience extremely intense and rewarding when you see what you’re capable of doing in such a short time.”

Parker said that it also makes it easier not to overanalyze in the rehearsal room, making everything much more relaxed and natural in the process.

“It forces the actors to do as much prep work and character background as possible on their own so they can bring it to rehearsal the next day, and this group is bringing it,” he said. “I’ve never been more inspired to do my best.”

With so many passionate and high-caliber performers, Lyric Theatre’s Dreamgirls is sure to have audiences dancing in the aisles and bopping along in their seats.

“I hope people leave the show with a greater understanding of love for themselves and for those closest to them,” Love said. “I hope they understand that no accomplishment, no award, no accolade is worth losing a friend or loved one. I want the audience to feel inspired, loved and lifted when they leave the building.”