Lyric Theatre's In the Heights propels questions of culture, class and identity 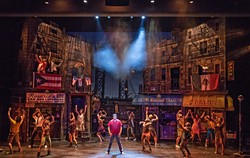 Reunions can be a funny thing. Whether a literal homecoming after freshman year at college or the symbolic revisiting of a beloved musical, there’s a propensity toward heightened emotion and renewed feeling. In the case of In the Heights, it’s both.

The Tony Award-winning musical was written by Quiara Alegría Hudes and features music and lyrics by Lin-Manuel Miranda.

In the Heights portrays residents of New York City’s Washington Heights neighborhood located in the northern Manhattan borough as they fall in and out of love and financial favor.

Through sudden windfalls (like finding a lottery ticket), the musical comments on the feasibility of social mobility. Facing a changing, gentrified neighborhood, Washington Heights’ mostly Hispanic residents must unite to protect their individual identities and aspirations.

“This show is about a home community — being able to find yourself and what home is for you, being someone that doesn’t necessarily come from the place that is home now,” said Lyric guest director Michael Balderrama.

Balderrama has been affiliated with In the Heights since late 2006, when he heard demo recordings of the future musical.

Balderrama became the production’s associate choreographer and resident supervisor of its first national tour. He has a thorough knowledge of the play’s inner workings that he can now use in his own vision, which he described as a “hybrid.”

While Balderrama’s show remains inspired by the original choreography and rhythmic structures, he has found ways to update and enliven the production, including a pivotal scene in a nightclub.

“We really spent some time developing what is a moving, breathing version of that club scene,” he said.

Other elements mark the director and choreographer’s vision as distinct: technical elements like lighting cues and his thematic investigation of character and motivation.

Telling the stories of Hispanic Americans and immigrants has a renewed relevance in today’s political climate.

“It’s very pertinent to what’s happening in our country right now,” Balderrama said. “It’s always been there, it’s always been apparent, this idea of immigrants coming to this country to find a new life.”

His take on the play’s protagonists, the Rosario family and Benny, among others, focuses on the nuances of inclusion. While many in Washington Heights face anti-immigrant prejudice, Balderrama added that the characters also struggle to accept differences within their families.

She also has deep ties to the musical, which she performed in high school, and to her character Nina, a role she revisits for a third time.

Nina returns to Washington Heights after leaving for college, and Oeschger said she used her personal experiences to tap into the role.

“Learning more about Puerto Rican culture has influenced my portrayal, and also now that I’ve left home and gone to college,” she said. “This kind of dual consciousness is something that I’ve dealt with in more recent years.”

In the Heights also benefits from Lin-Manuel Miranda’s more recent critical acclaim, even though the show predates Hamilton by several years.

Hyperfocused in its songs and choreography on those in the titular heights,  In the Heights also taps into a transcendent universality.

“I think it’s an even more important story to tell, that no matter where you come from, humans are all the same at their core,” Oeschger said.