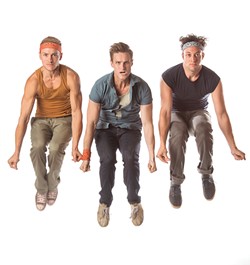 West Side Story, the landmark musical that transformed the Montagues and Capulets into Sharks and Jets, is 60 years old. It is such an essential piece of the Broadway firmament that it can be falsely perceived as quaint in the age of Hamilton and The Book of Mormon.

But as Lyric Theatre of Oklahoma mounts its new production of West Side Story, opening Tuesday, director Matthew Gardiner begs the question, How can a play about immigrants wanting to “live in America” when their fellow residents resent their presence be “quaint”?

“I think there is nothing more relevant than West Side Story at this time,” Gardiner said. “I mean, the piece is about doing better, trying to do better, working harder to recognize that our differences are what make us beautiful and not what should separate us. I think the message of opening one’s heart to another person is an important one.”

The story was adapted by Arthur Laurents (Alfred Hitchcock’s Rope, The Way We Were) from William Shakespeare’s Romeo and Juliet and centers on the warring Puerto Rican Sharks and the white Jets gangs on Manhattan’s Upper West Side. At the center of an ongoing war between the gangs is Tony, a former Jets member who is in love with Maria, the sister of Sharks leader Bernardo.

Laurents’ book was paired with music by Leonard Bernstein, lyrics by Stephen Sondheim and choreography by Jerome Robbins, giving West Side Story an enviable pedigree by any measure. Any of the constituent parts of the play would be considered iconic, from Robbins’ stylized depictions of street fighting through dance to Sondheim and Bernstein’s “Tonight,” “Somewhere,” “Maria,” “America” and “I Feel Pretty.” The songs by themselves are considered standards of the Great American Songbook, whether heard inside or outside the musical.

Gardiner recently directed a sold-out production of West Side Story at the Signature Theatre in Washington, D.C. — a 300-seat facility in which Gardiner was able to achieve a great degree of intimacy. Because of the scale, he was able to install fire escapes over the audience and stage much of the action around the seating.

With the upcoming performances at Civic Center Music Hall, Gardiner is working on a much larger scale, which presents its challenges.

“The major challenge is the limited amount of time,” he said. “And our M.O. has been to use Jerome Robbins’ original choreography, and to put it in this space is a huge undertaking. But luckily, I’m working with a group of people who have tackled the piece before, and we’re all excited to do this new production here.”

Of course, one of the reasons most people know West Side Story is the 1961 film version, which was directed by Robert Wise and starred Natalie Wood, Richard Beymer and Russ Tamblyn. That public awareness of the film can be both a blessing and a curse for a team mounting a new production.

Gardiner said that while he credits the film for pushing him to pursue a life in theater, he prefers to go to the source material and build his productions from the ground up.

That is also true for one of the stars of the Lyric Theatre production. MaryJoanna Grisso, who plays Maria, has played the character over 600 times, including the national revival tour and regional productions.

She said she contends with the long shadow of Wood’s cinematic performance. However, in each performance, Grisso said her goal is always to play the character in a way that is faithful to the original creators’ vision, but in a way that feels impactful and relatable today.

“The film is such a different feel from what happens in the live production,” Grisso said. “It’s beautiful in its own right, but when I need to refresh for the role, I go back to the book — the material is so strong and so powerful. When you’re a young soprano, you cannot help but think of Natalie Wood or the other performers who have played Maria, but it is important to come to it as your own self. You have to yourself to make your own connection with her.”