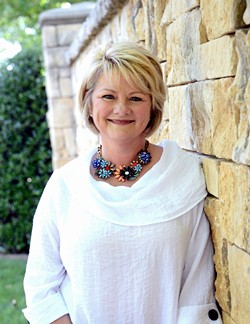 Shortly after her 50th birthday, Vickie Weigel had a mammogram, and the results were good. Although the American Cancer Society estimates more than 250,000 women in the United States receive breast cancer diagnoses every year, Weigel didn’t appear to be one of them.

“They didn’t see anything to be alarmed about, and everything was fine,” said Weigel, recalling her short-lived relief in 2013. “About two weeks later — it wasn’t very long — I noticed a place on my left breast. I really didn’t think much about it. I thought, ‘I don’t know; can you sleep on your breast wrong?’”

Fortunately for Weigel, a patient advocacy manager at ProCure Proton Therapy Center in Oklahoma City, her job at a cancer treatment clinic made it hard to forget the potential danger.

A subsequent ultrasound revealed she did have cause for concern. After a biopsy, pathology and MRIs, doctors diagnosed Weigel with stage three infiltrating ductal carcinoma in her left breast. Following multiple surgeries, 16 weeks of chemotherapy and 32 proton treatments, which concluded in 2014, Weigel was in remission.

As an official 2017 Portrait of Hope survivor for OKC’s Making Strides Against Breast Cancer 5K, scheduled to begin 7:30 a.m. Saturday at the USA Softball Hall of Fame Stadium, 2801 NE 50th St., Weigel said she wants to raise funds for the American Cancer Society and raise awareness for its many useful resources and programs.

“They really do things that make a difference to people who are in the middle of this battle,” she said.

One program Weigel said she benefited from in her own battle is called Look Good Feel Better.

“Of course, I lost my hair and my eyebrows and my eyelashes, and as a woman, that’s pretty difficult to do,” Weigel said. “So you go to this class with other women who are going through the same thing, and they show you how to put on fake eyelashes and do your makeup. ... They teach you how to wear the wraps and the turbans and everything around your bald head, and they have wigs that are available to people, and they help you figure out which one looks the best on you.”

Since the Making Strides walk began nationally in 1993, the American Cancer Society reports that more than 13 million participants have raised more than $810 million. Weigel said the 5K offers a chance to connect with the community of cancer survivors.

“I’d been involved in other cancer walks before, but this one, when I went to it, it was very personal,” she said. “It was very intimate. It really focuses on the survivors and their families. It had a very honoring feel to it. … It’s really very touching.”

Even participants who’ve never been diagnosed with the disease or known someone who was are adopted into the community, Weigel said.

“If you’re not walking or running for someone that you know, you get connected very quickly to the survivors that you meet out there,” she said. “It’s a great way to really help others that have to face this. You learn a lot just in case someone in your family has this diagnosis at some point.”