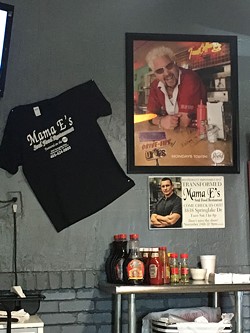 As host of Food Network’s Restaurant: Impossible, Robert Irvine has seen his fair share of turmoil as he helped revitalize eateries on the brink.

Irvine revealed on a recent episode of the show that the episode with the most drama and biggest explosive blowup happened right here in Oklahoma City, at Mama E’s Soul Food.

The soul food restaurant has the distinction of being featured on both Guy Fieri’s Diners, Drive-Ins and Dives (DDD) and Restaurant: Impossible. Its first appearance on the Food Network was a joyous occasion. Fieri featured Mama E’s Wings and Waffles on the sixth season of his show in 2009, not long after owner Keith Patterson opened his own restaurant with his wife Stephanie after two decades as the head chef at Twin Hills Country Club.

Fieri left town with some advice: The appearance on DDD would bring new customers; take advantage and expand the business. The Pattersons opened a second location a year after their first appearance on the Food Network, but it would also lead to the ignominious episode on Irvine’s show. According to Irvine’s website, it’s the only restaurant to ever be featured on both DDD and Restaurant: Impossible.

When Irvine arrived in 2014, he found the second location neglected. Keith Patterson was stretched too thin, trying to manage two restaurants, preaching duties at a church across the street and helping at the country club.

Irvine helped the Pattersons with portion control to increase profits and even provided extra time for Keith and Stephanie to work on their marriage — they admitted the last year of turmoil with the restaurant had impacted their relationship.

Irvine and Fieri are long gone, but their souvenirs remain. The second Mama E’s location has closed, leaving the original location at 3838 Springlake Drive. A Food Network logo adorns the outside sign, and the signature “Guy Ate Here” drawing is among the first things you see when you walk into the door. 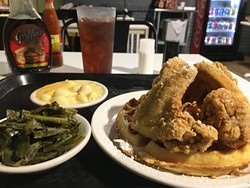 I arrived for my meal before noon on a Saturday because I had a feeling that it would fill up quickly during the weekend, and I was right. Business was more than brisk on the unseasonably bright and sunny fall day.

More than three years removed from their most recent television appearance, there is no more celebrity bump; customers are there for soul food: wings, neck bones, catfish chitlins and more.

When I ask Patterson how things have gone since the appearance on Restaurant: Impossible and subsequent closing of the second location, he answers as if the weight of a thousand overdue bills has been lifted from his shoulders.

“It’s been great,” Patterson said with a gleaming smile. “[Restaurant: Impossible] was a great experience, and it exposed us to a lot of things. It helped us to streamline, and I’m enjoying it.”

If the crowd on Saturday is any indication, Patterson has plenty reasons to smile.

The restaurant has gone through a slight rebranding since its original DDD appearance, dropping “Wings and Waffles” from its moniker and putting an emphasis on soul food, but its signature meal is still chicken and waffle with two sides ($16.95).

When a restaurant advertises something as a signature dish, I have to order it on my first visit. I ordered macaroni and cheese and greens as my sides and waited a few minutes for the waffle and chicken to be cooked to-order.

When you walk into Mama E’s, a lot of the slow-cooked food like sweet potatoes, smothered pork chops, neck bones and sides are available under heating lamps, but I was happy to see the wings served hot and fresh.

The size of the wings was the first thing I noticed. There need be no debate whether you like drums or flats at Mama E’s because you get both. Four giant wings and powdered sugar top the fluffy Belgian waffle.

The wings hit their mark: fresh and crispy — a classic fried wing. There’s no Buffalo sauce, but they carry Louisiana hot sauce, which I find far superior to the thin and vinegary Tabasco.

The star of the meal is the waffle. It might be the best I’ve ever had in my life. In fact, I’m struggling to think of what No. 2 would be. It’s chock-full of butter, and the edges caramelize in the iron. The addition of cinnamon to the batter gives it almost a savory element in conjunction with the melted butter. I suspect I might have to go to Belgium to find a better waffle.

The greens were one side item given a makeover during Irvine’s visit; he implored Patterson to add apple cider vinegar to the collards for extra sweetness. Patterson has ditched the suggestion, returning to a salty, tomato-based cooking liquid that Patterson said customers refer to as “liquid crack.”

I’ll be honest; I thought I’d be with Irvine. I like some sweetness in my greens, but the tangy greens won me over. The only disappointment was the macaroni and cheese, which was very soupy.

Overall, the meal at Mama E’s lifted my spirits. The service was friendly and welcoming as customers began to snake through the line. I still haven’t forgotten about the waffle, and I’ll be back on Tuesdays to try the two for $20 meal featuring two entrees of a meat and two sides. It’s great to see the Pattersons in such a good place after their rocky second appearance on the Food Network.

What works: The waffle is a show-stopper.

What needs work: The macaroni and cheese is soupy.