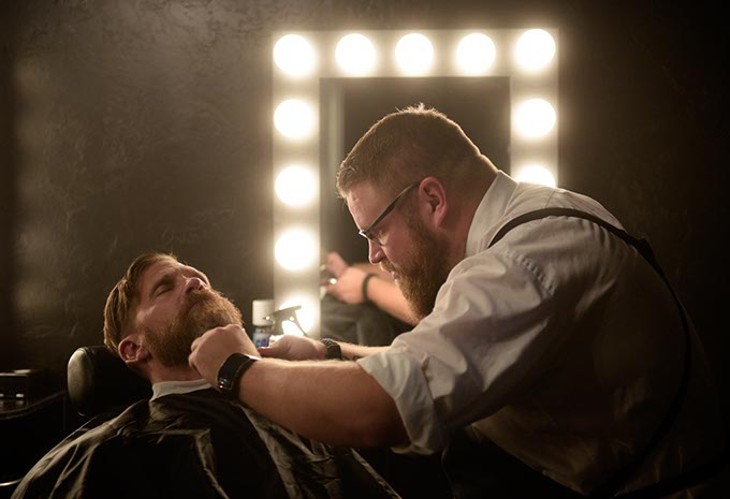 If you’re unclear on the meaning of “manscaping,” a fairly recent addition to the lexicon, the Oxford English Dictionary offers an example sentence.

“Say what you will about manscaping,” reads the OED, “the woolly mammoth died out for a reason.”

“The definition is the art of removal of hair from a man’s body,” said Grunewald.

“We decided that we wanted it to be a more comprehensive location for a man, because as a male, we were noticing that it would almost take all day to groom yourself,” Grunewald said. “You would spend all day driving. There wasn’t really a one-stop shop where a man could walk in and get groomed from head to toe.”

While other local businesses might offer similar combined services, Grunewald said they are primarily designed for female sensibilities.

“We tried to create an atmosphere that was the opposite of a traditional cosmetology center,” he said.

Clients at Manscape, for example, get their pedicures while sitting on a leather sofa in front of a TV set. Locally sourced coffee, wine and liquor are available and local art is on display. 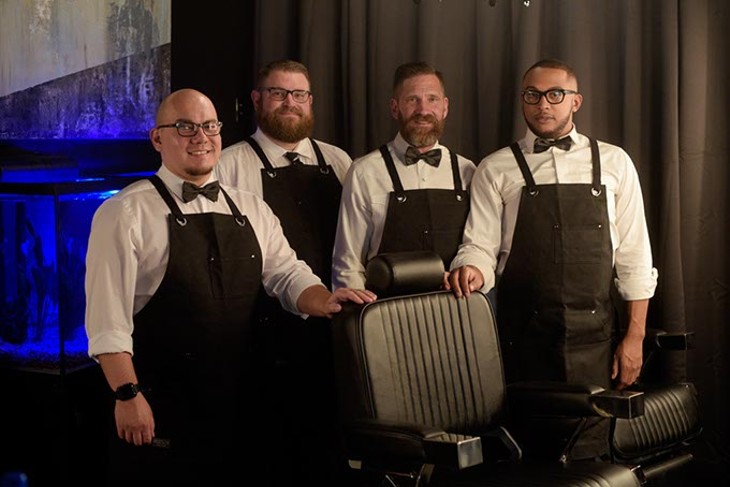 Manscape cosmetologists utilize an in-house line of cosmetic products made from a combination of vegan oils including sunflower, olive, saffron and coconut.

Eric and husband Ben Grunewald, who serves as Manscape’s chief executive officer, got the idea for the business from their own personal lives.

“The inspiration was we’re a same-sex biracial couple, and we noticed that one of the benefits of being a same-sex couple is that you can literally share everything,” Eric Grunewald said. “But we noticed that our cosmetics we were always having to buy double of, and then we also noticed that the textures of our beards and the textures of our hair were different on both of us, and so that led us to do some research on what products work the best on all different varieties of strands of hair.”

The Grunewalds, both licensed massage therapists, then spent two years developing the cosmetic products, which are scented with “masculine fragrances” such as leather, aloe and clover, and tobacco and bourbon.

Eric Grunewald also stressed that Manscape’s services, which are offered by appointment only, and environment are inclusive to all types of masculinity. In fact, the business’ appeal seems to extend beyond its original target market.

“What we’re finding out is that we created a men’s environment and women are beating down the doors,” Grunewald said. “Women are buying most of our products, they’re using our services and they want their man to get groomed there.”

The unexpected clients are a pleasant surprise for the Grunewalds.

“We will accept everyone and anyone,” he said. “We want all people to feel welcome.”