Many lay out plans to improve teacher pay 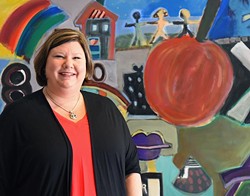 Elizabeth Ejtehadi made up her mind as a second-grader: She wanted to be a teacher.

“I had a second grade teacher that created a wonderful and loving environment in her classroom,” Ejtehadi said. “I had a desire to bring that same environment to kids in my future.”

The daughter of a preschool teacher, Ejtehadi began her career early. As a youth, she dragged her brother to a make-believe classroom in their backyard and instructed him on different things she learned at school.

Six years ago, Ejtehadi officially commenced her career as a third-grade teacher at Wilson Elementary School, part of Oklahoma City Public Schools. Her 8-year-old dreams came true as she created innovative lessons and welcomed each student with warmth and understanding.

“At our school, we have children from a variety of socioeconomic backgrounds. We have some children that live in homeless shelters and we have some children whose parents are law professors,” Ejtehadi explained. “Our school is a safety net, the one place [where] all children know they are encouraged and loved.”

Ejtehadi sees her role as a difference-maker in the lives of children, and she’s concerned about the future of the profession. Throughout her career, state lawmakers haven’t budged on base teacher salary. Oklahoma teachers now rank among the lowest paid in the nation, and average salary is $44,549, according to 2013-2014 data from the Oklahoma Education Association.

At the start of this academic year, the Oklahoma State School Boards Association reported that 1,000 teaching vacancies remained after slashing 600 teacher positions over the summer. That prompted the State Board of Education to approve a record number of emergency teaching certificates.

Education leaders believe teachers are leaving Oklahoma — some for different careers and others for higher-paying educator jobs in neighboring states.

Those who stay often struggle. When Ejtehadi and her colleagues talk, they share tales of dipping into savings accounts to take an out-of-town sister to dinner or hire a babysitter for a much-needed night out.

“You can’t afford to have a family, support a family and be a teacher, which is heartbreaking,” Ejtehadi said. “We should be able to.”

Others agreed. Within her first month in office, State Superintendent of Public Instruction Joy Hofmeister revealed a five-year plan to raise educator pay to the regional average. Called #OKhigh5, the plan would cost $150 million in its first year and provide a $2,000 pay raise and two additional days of instruction. The proposal requires the blessing of the Legislature and the governor, which didn’t happen during the most recent legislative session.

Faced with a $611 million budget shortfall, Oklahoma lawmakers approved a budget that left no room for raises or increases to fund classroom instruction. 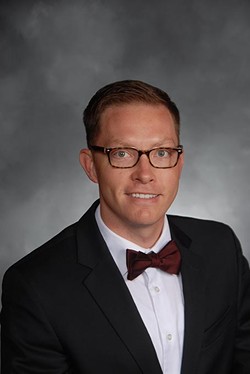 Ryan Owens, co-executive director of the Cooperative Council for Oklahoma School Administration, said lawmakers are aware of education needs, including teacher shortages. His staff, as well as members from other state education groups, advocate for changes in funding. The dialogue often begins with the facts.

That’s a difference of about $160 million, which placed Oklahoma as the nation’s leading state to cut per-student spending, according to the Center on Budget and Policy Priorities.

“It is not like this is a problem that developed overnight,” Owens said. “We have been taking these steps towards a crisis for six years. Sadly, it is a mess and it needs cleaned up … We are on a path that is unsustainable.”

Alicia Priest, president of the Oklahoma Education Association, agreed. She became involved in the group, which represents 35,000 retired and current school employees, after seeing best classroom practices diminish in the wake of the state budget cuts.

“We are at a critical crossroad, and there is no way you can turn a blind eye,” said Priest, who taught at Yukon Public Schools for 16 years before leaving for the presidency post.

Owens wasn’t surprised by two different proposals that surfaced after the start of this school year. In August, Woodward Sen. Bryce Marlatt called for a ballot measure to divert funds from the Oklahoma Tobacco Settlement Endowment Trust to produce an across-the-board teacher pay raise.

For a sales tax proposal to appear on the November 2016 ballot, the secretary of state would review and, potentially, approve language. Then, a petition would circulate over a period of 90 days to collect signatures.

Owens is optimistic about finding alternative revenues for public education funding; however, he mentioned the timing coincides with cuts to a revenue source.

Beginning Jan. 1, the personal income tax rate will drop from 5.25 percent to 5 percent, which was decided by lawmakers in April 2014. The tax cut, along with plunging energy prices, is predicted to carve an even larger budget hole, around $1 billion for fiscal year 2017, according to recent reports.

“Last year, the governor made comments that we had one of the fastest growing economies in the nation and one of the lowest unemployment rates in the nation, but we cut the budget and did not invest in our core services,” Owen said. “I just don’t think those messages fit. If you have a strong environment, you should have a very strong investment in core services.”

Priest said it will take a long-term solution to make a meaningful impact in public education funding. She doesn’t support the Republican lawmaker’s proposal to take funds from a state trust, which has a balance of nearly $1 billion. The TSET board of directors denounced the plan, as those funds are delegated toward the prevention and reduction of tobacco use and supporting cancer research.

“We are encouraged by the 1-cent sales tax conversation because it talks about a new revenue stream that is dedicated to public education,” said Priest, who advised that any proposal would take time to implement.

Hofmeister, who oversees the common education budget, views Boren’s plan as auspicious but said she will review the proposal before pledging support. Boren has not provided specific plan details.

“I applaud President Boren for advancing the dialogue on how best to strengthen public education in Oklahoma. We need more ideas, not fewer,” she said in a statement to Oklahoma Gazette.

Lawmakers have shown some efforts to improve education. Earlier this year, an enacted law called for relaxing testing requirements when hiring experienced teachers from out-of-state.

Education leaders are hopeful progress again will be made when the legislative session convenes in February. Some believe it is positive sign when bill proposals are announced at the Capitol months before the December request date.

At Wilson Elementary School, Ejtehadi can only wonder what it would be like if the Legislature enacted policies to attract young professionals to education, provided adequate funding to create smaller class sizes and boosted teacher pay.

“I appreciate the new plans crafted,” Ejtehadi said. “I am very grateful that people are starting to talk about it, look into it and take teaching pay seriously.”

Last month, University of Oklahoma President David Boren pitched a sales tax increase for funding common and higher education. The group, Oklahoma’s Children — Our Future, wants voters to decide whether a state sales tax should boost education funding, including raising teacher pay. Boren has not officially unveiled his initiative or declared if the sales tax would be a statutory or constitutional change. The former governor wants to see it on the November 2016 ballot. Impact: Directed by the Oklahoma Policy Institute, the Institute on Taxation and Economic Policy reviewed the proposal, finding the sales tax would have the most damaging impact on the poor.

“The education initiative is sorely needed, but the decision to fund it exclusively through a sales tax increase means that it will hurt the pocketbooks of those families who are already struggling,” said Oklahoma Policy Institute’s Gene Perry in a statement about the proposal.

Sen. Bryce Marlatt declared he will push for legislation that would give teachers pay raises. His efforts include moving funds from Oklahoma’s Tobacco Settlement Endowment Trust (TSET) into the common education budget.

Marlatt believes with smoking rates decreasing, the funds could be redirected. The Republican wants voters to make the ultimate decision, as his legislation calls for a ballot measure.

Impact: Voters created the trust to preserve tobacco settlement money with the purpose of improving the heath of Oklahomans.

“Voters certainly have the power to voice their preference and priorities at the ballot box,” said Casey Killblane, TSET board member, in a media statement. “Taking funds from ongoing successful efforts that improve health is not the answer.”