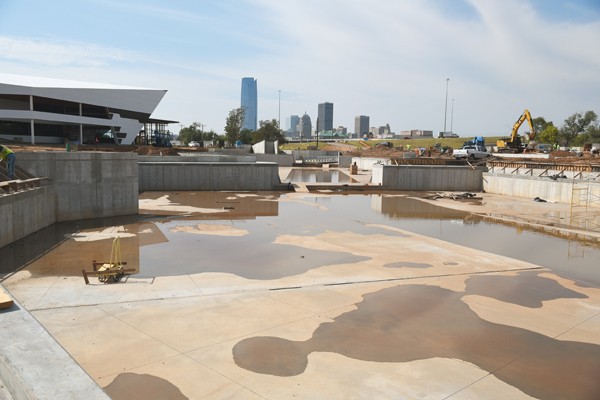 Mike Knopp remembers the bare riverbanks of the North Canadian River. That was back when Oklahoma City residents used the term “ditch” to describe the nearly dry area.

When looking at the “ditch,” Knopp saw possibilities.

“Even before there was water in the river, I had dreams of whitewater,” said Knopp, executive director of the Oklahoma City Boathouse Foundation.

Since 2004, the seven-mile stretch of the North Canadian River — now called the Oklahoma River — has morphed into an active area where visitors play and exercise. Athletes row or paddle on its 4,000-meter course, families bike along the trails and children play in the youth zone of the Riversport Adventure complex.

OKC’s next adventure facility opens to the public in May. Riversport Rapids will offer residents and tourists the experience of whitewater in downtown OKC.

Riversport Rapids is a Metropolitan Area Projects (MAPS) 3, $45.6 million man-made rafting and kayaking center nestled next to the Oklahoma River. Construction began about a year ago, and its debut is tied in with hosting the U.S. Olympic canoeing and kayaking trials in the spring. Following the trials, visitors get their shot at paddling through rapids with the Oklahoma skyline in view.

“We will have this incredible outdoor recreational venue right in downtown,” Knopp said. “We are  going to have something that nobody has … I think this is just one more major asset Oklahoma City will have.”

The center is coming in at budget but is pressed for time, according to architect Jeffrey Gustin.

Weather is a factor for completing the complex, which includes three buildings, a pump station and a rapids course.

Representing the whitewater design firm S20, Gustin estimates water could begin flowing through the two channels and pools by mid-November. Training and testing will follow.

Once complete, the OKC Boathouse Foundation will maintain the complex. The main building, a 25,000-square-foot facility, will serve as the main entrance and welcome center.

There, visitors can buy tickets to raft, purchase souvenirs and merchandise in the retail shop, get a bite to eat in a grab-and-go venue or visit the main restaurant, with views overlooking the river and the course.

No admission is required for those who don’t want to raft, and groups are encouraged to take in the sights by walking along the course or relaxing on benches.

Riversport Rapids was designed with public interest in mind as well as serving as a training center. It will have areas for sightseers tucked throughout the course and a spot for concerts on the lawn. Space in the main building can incorporate three eateries, which will be open to the public.

“There is something out here for everyone, even if it is just walking the paths, hanging out, listening to music, buying a beer or buying a sandwich,” Gustin said.

Riversport Rapids will be the first pumped-park design in the world offering a competition channel, a recreational channel and a combined-flow freestyle channel in the same whitewater venue, according to the S2O website.

Knopp encourages first-time rafters to visit the center shortly after it opens. The foundation plans special days where the pumps are set on low, offering more gentle tubing experiences. He hopes to ease people unfamiliar with rafting into the sport.

“It is just like when we started rowing,” Knopp said. “Nobody really knew what that was. Now, we’ve got hundreds of people involved in those programs.”

Anyone who buys a rafting ticket can expect to undergo a training and safety session with instructor-supervised time on the water.