Oklahoma City Council established the MAPS 4 Citizens Advisory Board despite some concern about the name.

Ward 2 councilwoman JoBeth Hamon sought to amend the MAPS 4 Citizens Advisory Board’s name in an attempt to be more inclusive. Hamon’s amendment would have changed the word “citizen” to “resident” wherever it would be legal to do so.

But before any discussion even took place, a motion was made to pass the item without Hamon’s amendment.

“I was a little upset and frustrated because of that feeling of, ‘Oh, this isn’t even a discussion that council is wanting to have,’ and that just feels insulting and somewhat dismissive of myself and any other person on that board,” Hamon told Oklahoma Gazette. “I didn’t feel like my input was taken seriously, and I know other councilmembers had feedback and input about some of the subcommittees for projects that were a little more controversial.”

Despite the original motion, there was a discussion about the amendment, but it ultimately failed 6-3, with Ward 2’s James Cooper and Ward 7’s Nikki Nice voting in support. Council then voted 8-1, with Hamon as the sole opposition, to establish the advisory board using the word “citizen.”

“This is an important enough issue that I’m willing to say, ‘I’m not for this.’ I tried to make a change, and that didn’t work,” Hamon said. “It’s not because I didn’t get my way that I’m voting no, but because I truly do feel like this is not in the best interest of the city as a whole and the people I represent.”

Hamon said some of her constituents have expressed to her that the word “citizen” is exclusionary to immigrants, particularly undocumented people without citizenship.

“If we really do want to say that we’re being open and encouraging engagement from a diverse set of people, in my mind, that means that language should be important and should be really taught about,” she said.

During the meeting, Ward 8’s Mark Stonecipher said he had concerns about “tinkering with the language” since the original MAPS 4 vote included the word “citizen.” However, Hamon said their legal counsel had already identified places where it would be legal to change the language.

Ward 4’s Todd Stone said during the meeting that he represents many different ethnicities and that despite anyone’s legal status, he considers them citizens of the city if they live in Oklahoma City. Mayor David Holt agreed, citing the dictionary’s definition.

Holt later told Gazette that he doesn’t want any undocumented residents to feel excluded by the terminology.

“The word ‘citizen’ is defined as the inhabitant of a city. That’s the most broad and inclusive definition possible. It covers every single human being who resides in your city. That’s the dictionary definition,” Holt said. “I think the word as used here is absolutely inclusive, and I absolutely want the advisory board to be inclusive. So I never really understood where the confusion lay because I think the word as defined is absolutely inclusive of all people residing in Oklahoma City. It has nothing to do with your legal status. That seemed to be a source of confusion, and I think that’s why the amendment failed.” 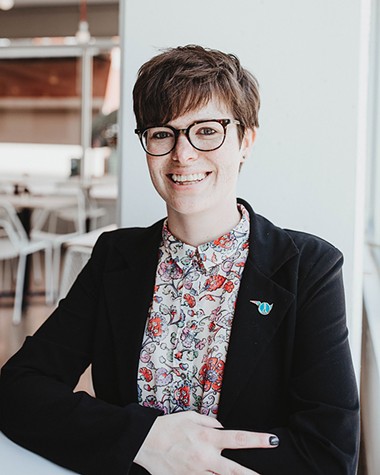 Hamon pushed back during the meeting, saying that despite a dictionary definition, some people have negative perceptions of the word.

In a statement to Gazette, Dream Action Oklahoma, a local community-based nonprofit that provides information and resources to the immigrant community, agreed with Hamon, saying the word “resident” is far more inclusive.

“In Oklahoma, we continue to battle against systemic oppressions that disenfranchise undocumented and immigrant bodies from being seen as stakeholders in decision-making opportunities,” reads the statement. “These disparities begin with exclusive language that targets underrepresented people, resulting in perpetual harm to our community. The MAPS 4 advisory board is intended to continue OKC’s effort in transformational changes that affect undocumented and immigrant bodies too, deeming it rather important to be as inclusive as possible. The word ‘citizen’ establishes a segregation between citizens and non-citizens, who are all residents contributing to the growth of Oklahoma City.”

Despite the name, there is no citizenship requirement for serving on the board, which will make recommendations on the implementation plan to the council.

“My intention is to be very deferential to the councilmembers as they recommend names, and I suspect we’ll have those conversations in the weeks ahead,” Holt said. “The subcommittees are not ward-specific, so similarly, I’ll be making the appointment subject to council approval. But some of the councilmembers are really interested in certain projects, and so I’ll certainly talk to them about that.”

The 16 projects are split up into subcommittees by categories with only Innovation District and Freedom Center having their own subcommittee.

In terms of project priority, Holt said that will be a conversation between the advisory board, city council and a consultant.

“There will be probably a consultant brought in like there was in MAPS 3. ADG served that role on MAPS 3. It’s going to be a lot of conversation about the implementation plan,” he said. “The project order is probably not as clean as people think of it. … Many of those projects are going to be multi-faceted, and as you get into these complexities, you’re going to have projects that are actually being implemented throughout the whole decade. The park initiative, for example. That’s going to affect over 150 neighborhood parks, so that’s not going to be all in year six.”

Hamon said she hopes the human needs and social services are prioritized before things like venues.

“Those are such pressing needs. I want to make sure that we aren’t letting some of those languish for a few years when maybe we really could get some of that stuff started and some of those projects off the ground,” she said. “Something like the diversion hub is only allocated [$17 million], that’s one of those that’s like, ‘Can we just get that going?’ That’s a huge need that we have right now.”

Hamon and Holt both encourage anyone interested in joining the board to apply online.

“There’s only so many positions, and it’s a big city. So we’re not going to be able to accommodate everybody, but we certainly want people to express their interest,” Holt said. “I would also remind people that the meetings are public, and even if you don’t make it onto the advisory board or a subcommittee, you’ll have opportunities to engage in the process. It’s a long process. … If you want to be really engaged and you really want to have an influence on the outcome, you’re going to have to be somewhat patient and persistent.”