Thousands of women and their allies came to the Oklahoma Capitol on Jan. 21 to send a bold message to state lawmakers and a new presidential administration that they would not be ignored or have their rights stomped on. After more than 12,000 women and men marched down N. Lincoln Boulevard before overflowing the south lawn to listen to women activists and lawmakers, the organizers behind Women’s March on Oklahoma pondered how to channel the march’s energy into action that produced political change.

“What is the best way to make sure this does not die because we have a huge fight?” Sacia Fowler asked.

It was the question that ran through her mind in the months following Women’s March on Oklahoma; Women’s March on Washington, where more than a half million people marched; and the more than 600 other sister marches across the globe. The march is believed to be the largest single-day demonstration in recorded United States history.

“We didn’t want to reinvent the wheel or anything that local organizations were already doing,” said Lindsey Kanaly, the lead orchestrator of the Women’s March on Oklahoma. “We got into the mode of amplifying messages and events to get people involved. … We had the Women’s March movement, and what they were doing was focusing on social justice issues. We were supportive of that, but we also felt like there was more we could do.”

In May, Kanaly and Fowler arrived in northern Indiana for a retreat with fellow Women’s March leaders from 30 states. Women’s March remains a movement with a platform dedicated to “providing intersectional education on a diverse range of issues and creating entry points for new grassroots activists and organizers to engage in their local communities through trainings, outreach programs and events,” according to its website. On that particular spring weekend, a group of women decided that a complementary movement could not only sustain the Women’s March message but also result in a political sea change for women’s priorities.

Over that spring weekend, March On — or “March on to the polls in 2018,” Kanaly said, listing the organization’s slogan — was born.

Last month, Fowler and Kanaly, along with dozens of other women, launched March On as a women-led advocacy organization to broaden the reach and goals of the well-known march. The goal is to crowdsource a political platform between women and allies and then use it to make changes in the political system.

Through an “army of marchers,” also known as “marchroots,” they will “take concrete, coordinated action at the federal, state and local levels,” according to the organization’s website, wearemarchon.org.

“We’ve come together to focus on elections at all levels, school board up to Congress and the president,” Kanaly said. “Our mission is to inform politics, create progressive political change from the local to the national level.”

While the vision is for the “marchroots” to expand the vote in America by flooding the streets and marching voters to the voting booths in every precinct in the country, much of the work of March On leading to the primaries and election will be behind the scenes to address election issues. March On affiliates will be the hubs for local organizing with canvassing, phone banking, distributing yard signs or other campaign-related activates.

For the March On Oklahoma affiliate, leaders are focused on increasing voter engagement and supporting progressive candidates to run for office, explained Alex Aguilar, who joins a Kanaly as a board member of the national March On organization.

“There is this element of education and engagement that has to happen at the ground level before you can knock on someone’s door and tell them to vote,” said Aguilar, who works as a social worker in Tulsa and heads March On Oklahoma’s efforts in Tulsa.

As an example of how March On could engage the public, she named the recent dollar store moratorium discussion at Tulsa City Council. District One Councilor Vanessa Hall-Harper proposed a six-month moratorium on dollar stores moving into Tulsa to allow for the city to pursue options to bring a needed grocery store to the north Tulsa area. The proposal was widely supported by north Tulsa residents, and phone calls and emails to council members’ offices began. In September, after the moratorium was hotly debated, the council approved a 180-day moratorium on dollar stores.

“It is getting people away from that fear of asking questions or appearing like they aren’t educated [on issues],” Kanaly said. 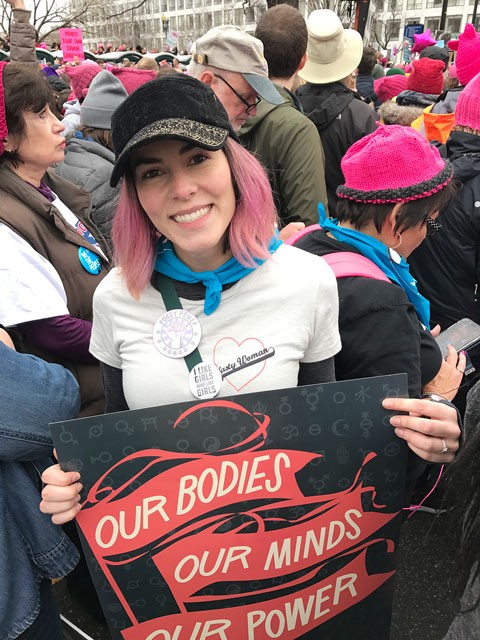 “Our future is our priority even though we are living in the present,” said Fowler, who also serves as a member of the national March On Leadership Council team in addition to leading March On Oklahoma.

March On Oklahoma will be molded in the coming months as more enlist and share their perspective and passions for building a government at all three levels that address the issues important to the marchrooters. Both the national organization and local affiliates are nonpartisan; Fowler, Kanaly and Aguilar encourage people of all political affiliation to get involved. As they see it, March On Oklahoma is about issues and people, not political parties.

“We want to get the job done,” Aguilar said. “We don’t want to sit around and talk about it. We don’t want to be keyboard activists. We want to see legitimate change in our country. If it is left up to the women to do it, by God, we are going to do it.”

Print headline: Next steps; After the Women’s March, three Oklahomans pushed the conversation on what’s next. The answer is March On.