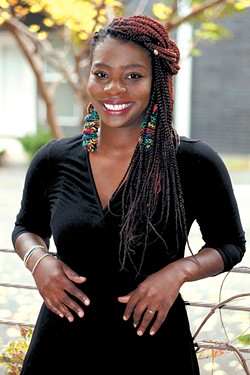 Haitian culture is often communal. In rural areas, people frequently build private residences close together around a common courtyard area where family and community members share the space for the benefit of the entire group.

This kind of courtyard is called a lakou. Each lakou is different, but community members can often be found in a shared garden, preparing a large meal, caring for the group’s children and working on a variety of artistic and cultural pursuits.

“It’s a physical space to make sure everyone is taken care of within that system,” said Marie Casimir, a Haitian-born writer and dancer who now teaches African dance at University of Oklahoma. “But it also becomes a metaphorical space for togetherness, especially in rural Haiti if you’re talking about not letting people slip away or slip through the cracks.”

The workshops combine dance and writing disciplines to enhance storytelling and, in the process, build a lakou-like community with strangers.

The next class in the series takes place 2 p.m. March 24 at SixTwelve, 612 NW 29th St. Attendance is open to anyone — even those who did not attend the first workshop in February — but a donation of at least $5 is recommended.

“It really is for everyone,” Casimir said. “It’s built to be that way in that I’m not teaching a bunch of technique, necessarily. I give the foundation for Haitian and Afro-Caribbean movement. But that’s all within this larger system of finding our relationship with each other and ourselves.”

SixTwelve, a refurbished apartment building, closely resembles a large house from both the interior and exterior. To the side of the building is a community vegetable garden that includes live, egg-laying hens.

Casimir has lived in Oklahoma City for the past two years after spending several years as part of Chicago’s performing arts community. From the moment she first saw SixTwelve, she was immediately reminded of the Haitian lakou.

“For me,” she said, “every time I was in the space, I just felt really good.”

That reminder turned into inspiration for a series of community-building art workshops, which she said SixTwelve founder Amy Young enthusiastically approved.

Casimir moved from Haiti, a French and Haitian Creole-speaking country located on the Caribbean island Hispanola with Spanish-speaking neighboring nation Dominican Republic, to Rockland County, New York — essentially suburban New York City — when she was 5 years old. She grew up around theater and musicals, always performing on a stage.

She first discovered dance and poetry in her preteen years, passions that she always kept separate until about 10 years ago.

After attending college in Upstate New York, Casimir moved to Chicago to get her master’s degree in nonprofit administration at North Park University. While working at an experimental performance space, she found herself submerged in the city’s performing arts scene. She watched as dancers used dance and movement to connect with audiences in ways she had not yet imagined, which inspired her to begin mixing things she knew from writing with dance disciplines.

About three years ago, her husband got a job in Oklahoma and the couple moved to OKC. Casimir later got her job teaching at OU. She still maintains a variety of art projects around the country, including organizing the annual Instigation Festival in Chicago and New Orleans, but is still in the process of feeling out the local creative scene — particularly performance culture.

Casimir has noticed the city’s vibrant visual art community and has already begun to embed herself into it, though she would not describe herself as a visual artist.

“A lot of the work I create now is so interdisciplinary,” she said, “so to be immersed in a discipline that’s not my own, like the visual art community, is really quite nice.”

Coming from New York and Chicago, it is easy to understand how the scale of OKC’s art scene might seem small. But Casimir said she actually thinks a lot of things are going on locally; they just might be spread out over a larger area.

“I miss my explosive community, but people are doing things here,” she said. “I think it might just be spread out and in these little pockets, which is kind of neat.”

Whereas some larger cities have more established art cultures, Casimir has noticed that OKC and the surrounding area seems to be on the precipice of a lot of firsts. She is excited at the chance to make a real mark on the community.

“I feel like I’m here at just the right time.”

Casimir practices theatrical jazz, which she said is the idea that storytelling and movement can exist at the same time and on separate planes of meaning.

The term “interpretive dance” has become a concept that most people don’t take seriously, so Casimir avoids the words. Her art is not about miming her way through a story. Movement is an expression of feeling just like words. Sometimes she will make movements informed by her writing, and sometimes her writing is informed by her words. Her way of communicating to the audience isn’t one that has to be narrative.

“It’s not necessarily linear,” she said. “It can be, but it doesn’t have to be.”

Casimir said words can affect people in the same way as their favorite song. If one can dance to a rhythm, they can dance to an idea.

“There’s something about hearing words and writing words that is the same thing as listening to music,” she said. “The music is going to impact what you’re doing.”

Casimir’s parents returned to Haiti after they retired. The dancer tries to return to her home country at least once a year, not just to see her family, but to connect with local artists. Casimir’s culture and heritage are important to her, and she wants to build her own connections to the country.

“I feel like, for my generation specifically, it’s really important that we’re relearning our culture in a first-person way,” she said.

Dance has become one of the most fulfilling ways to reconnect to her African heritage. On one hand, Haiti is a country of immigrants, so its dance tradition has been patched together from a number of other cultures. On the other, Haiti was the first independent black nation, and Casimir said that independence helped preserve some of the art form’s most authentic elements.

“I think that’s one of the reasons it’s so important to me,” she said. “It feels like the least diluted part of our culture.”

One of the things Casimir hopes people take away from Reclaiming the Lakou is a new respect for Haitian culture. She feels almost obliged to share her heritage with others.

“For me, it’s like I’m taking what I have from home and bringing it here to Oklahoma City and offering that,” she said. “As immigrants — not just as Haitian people — we do that.”

Her other hope is that participants, in expressing themselves to others and having strangers open up to them, will realize they are never truly alone.

“It’s possible to be in community with strangers,” she said. “We do basic foundation work and outside of that one experience, it’s up to you to continue the work interacting with people you don’t necessarily know.”