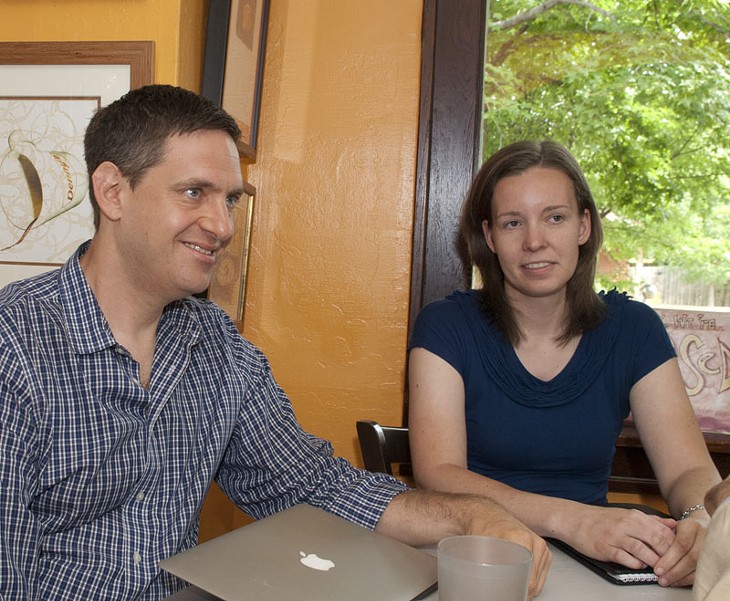 Marriage equality advocates have tailored their message for the Oklahoma market, trying to appeal to the religious and conservative communities of the state.

“The messenger is more important than the message,” said Marc Solomon, national campaign director for Freedom to Marry.

Solomon said making a convincing legal argument to those opposed to same-sex marriage is not nearly as effective as finding convincing spokespeople for the cause. In a state like Oklahoma, that means that finding pastors, Christians and Republicans to show support for marriage equality can be an effective strategy, Solomon said.

“Here in Oklahoma, we value family,” Oklahoma veteran Ed Cuyler said in a television commercial put out by Freedom to Marry and Freedom Oklahoma. “As a veteran, I know freedom means freedom for everyone, and no family should be denied the basic freedom.”

Cuyler is a Republican rancher whose daughter, Deedra, is a lesbian. In the commercial, Cuyler offers a conservative case for marriage equality that advocates hope will hit home in Oklahoma.

“It’s about making the case from Oklahoman to Oklahoman on why this is in line with the values of the people who live here,” Solomon said.

Solomon, whose organization is based in New York, was recently in Oklahoma to meet with local marriage equality advocates as the state waits for the U.S. 10th Circuit Court of Appeals to render its verdict on Oklahoma’s gay marriage ban.

Oklahoma voters banned same-sex marriage in 2004 during a time when a wave of anti-gay ballot initiatives were sweeping across the country. Since then, dozens of state bans have been declared unconstitutional, including the one in Oklahoma.

“People have heard a lot from [the same-sex] community since 2004, but they have not heard as much from our allies,” said Amanda Snipes, communication director for The Equality Network.

Freedom Oklahoma has published a list of over 60 Oklahoma ministers who support same-sex marriage and another couple hundred names of lawyers and veterans. Snipes said advocacy in the Sooner State has been particularly focused on a libertarian message of individual freedom in an effort to make the case for gay rights.

“I think if you asked the average Oklahoman if individuals are doing something in the privacy of their own home and not hurting anyone, should the government get involved, they would say no,” Snipes added.

The changing tone of the opposition

While there are many examples of Republicans fighting same-sex marriage and it’s likely Oklahoma leaders will appeal any future court decision that strikes down the gay marriage ban, there are also signs the party might see it as a battle no longer worth fighting.

"I don't think the Republican Party is fighting it," Wisconsin's Republican Gov. Scott Walker told the Associated Press in an interview this month. "I'm not saying it's not important, but Republicans haven't been talking about this. We've been talking about economic and fiscal issues. It's those on the left that are pushing it."

The same AP article highlighted other cases of Republican leaders steering away from the same-sex marriage fight. However, the official Republican platform still states, “We believe that marriage, the union of one man and one woman, must be upheld as the national standard, a goal to stand for, encourage and promote through laws governing marriage.”

Following a district judge’s ruling in January that Oklahoma’s ban was unconstitutional, Gov. Mary Fallin expressed disagreement with the ruling. However, rather than affirming her stance against same-sex relationships, she argued for the state’s right to set its own laws.

“I support the right of Oklahoma’s voters to govern themselves on this and other policy matters,” Fallin said. “I am disappointed in the judge’s ruling and troubled that the will of the people has once again been ignored by the federal government.”

Same-sex advocates also noticed an interview given by Steve Kern, pastor of Olivet Baptist Church and a Republican candidate for state Senate, who has been outspoken against same-sex marriage. In an interview with News 9, Kern, like Fallin, addressed the matter as a state’s rights issue.

“No, it’s not biblical, but they have the freedom to do that,” Kern said about same-sex relationships. “Its more imposing on a state right to determine what the people believe should be guidelines for the way they operate.”

As opponents try to shift the discussion to one of state rights, supporters of gay marriage are working to frame it as an argument for individual freedom. Both are popular concepts in Oklahoma.