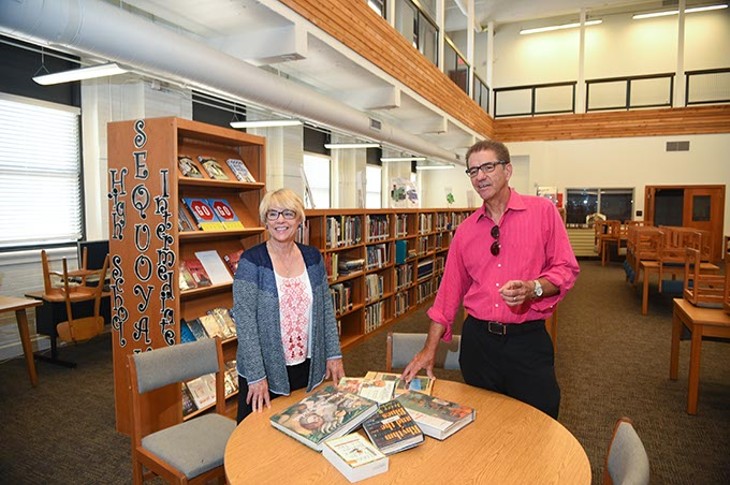 As a little girl, Kathleen Lienke was consumed by books, ideas and the other worlds they revealed.

“I kind of have that stereotypical past,” she told Oklahoma Gazette in a recent interview that included her husband, Roger. “I love to read. I’m a voracious reader. I always was drawn to it as a kid. We would ride our bikes to the library and get piles of books. We would climb trees and read books up in the trees.”

She managed to stay in the world of books as she taught others how to explore that world all the way to her retirement this year from Oklahoma City Public Schools (OKCPS) after 33 years. She spent most of that time as a librarian.

For the last 15 years, she has been director of the district’s Library and Instruction Media Services.

Referring to the Broadway play and movie The Music Man, her husband fashioned himself somewhat as the “music man who was validated by marrying the librarian.”

He has composed and performed his own music since he was 15 years old.

Roger is the middle of three creative brothers. In the ’70s, the trio formed The Lienke Brothers City Band. They gained popularity and released several albums and eventually moved to Los Angeles.

Even though the brothers split up in their 30s to pursue a host of other goals, Roger, now a psychiatric nurse, has continued in the creative process even into this year and has produced yet another two-disc album of his own work.

Roger married Kathleen many years ago, after she had been a librarian for a while, when they both lived in California. Kathleen the librarian was who he wanted to marry, and he has shared her passion for developing and supporting libraries throughout their marriage.

However, the juxtaposition of stereotypes — a bookworm married to an artist — is not as stark as the characters in that musical portray.

Kathleen and Roger both exhibit a love of imagination, creativity and exploration, Kathleen through promoting reading and learning and Roger through his music and mental health practice.

“The library is an artful place. To me, it supports all of those areas of music and literature and visual art and dance and then the everyday life,” she said.

They both view the school library as anything but optional.

“In the school, the library is the hub,” Roger said. “It’s the heart of it. It’s the imagination center. But it’s also the communal center.”

There are 73 of those hubs served by 55 certified librarians and 53 assistants in OKCPS.

Those are large numbers because the district is the largest in the state, with more than 40,000 students.

Many of us might assume that the main thing about a library is the hardware, the books and the building.

But Kathleen knows the key to a successful library is its librarian.

“There is that myth now that ‘Oh, now we have the Internet. We don’t need the library,’ which is totally false,” she said. “What libraries have that the Internet doesn’t are the people. They have librarians who are there to help you find what you want, help you find books that you like to read.”

Bibliothecaries are trained to help students find the most interesting reading for them and teach them research methods for many kinds of information.

Kathleen also pointed out that certified public school librarians specialize in ways to collaboratively work with the teachers in their school and be resources for them.

Applicants must first earn their teacher certification before they can be certified as a public school librarian. That also gives them an edge in understanding what their schools need in order to develop more effective teaching plans.

A school library is a haven, too. It’s where the quiet kids, the introverts or those who are intellectually in a different place from their peers go to find other students like them who share their interests.

There, they aren’t outsiders.

“People who are going into the library [who] are seemingly introverted and maybe misfits in some way or another are not necessarily that,” he said. “If you take the labeling off, they are in search of something, they are seeking integration. They are seeking growth.”

If people are what make a school library move, current technology is what keeps it vital.

Employees train students on how to use the online catalogue and student-friendly, librarian-vetted national databases. Teachers become pupils as they’re guided on ways to integrate tech into their classrooms, too. Kathleen said both learn how to best use online resources and searchable databases.

Even so, she said she’s troubled by the barriers too many students still face.

Before school starts each day, students often line up at the high school library door so they can access the Internet or work on assignments that they otherwise can’t finish at home.

Kathleen knows from her decades of experience that many families can’t afford home Internet access, let alone home computers. This, in turn, restricts the time students have available for doing online research and completing assignments.

She said these hubs are necessary for healthy school districts and their students and occasional grants allow longer hours for temporary lengths of time, but they don’t do enough.

In the last year of her career with the district, Kathleen said she has pushed for consistent funding for extended library hours.

A new chapter begins for the librarian and the music man as they move from one mode of creativity to another. With Kathleen’s retirement, they become different kinds of advocates for arts and literacy.

Their affection and appreciation for each other remains intact after 38 years of marriage.

Roger said that he “got lucky” when he married the librarian.

At the end of the interview, he sang one of the lines from The Music Man: “Oh what can I say, my dear, to make it clear, I love you madly, madly, madam librarian.”

Print headline: Book lovers, The librarian and the music man move into a new phase of education advocacy.