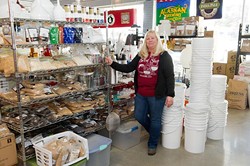 On Sunday, if you can get a ticket, you can drink the future.

Area home brewers will be sharing their beers with each other and the public for free at the fifth annual Mashed in OKC Sunday at TapWerks Ale House, 121 E. Sheridan Ave.

The second and third floors of the bar and restaurant will see members of brew clubs Red Earth Brewers, High Plains Drafters and The Yeastie Boys and plenty of independent hobbyists opening bottles and tapping kegs of their concoctions.

That’s one reason COOP Ale Works helped set up the first Mashed in OKC event — to encourage more brewers in the market.

“Tony (Tielli) and the guys from Roughtail [Brewing Company] were here the first year as home brewers,” he said. “Another gentleman who is starting the Twisted Spike Brewery, Bruce Sanchez, has poured at Mashed.”

The name comes from the process of adding water to grain, the beginning of the beer-making process, said The Brew Shop owner and Mashed organizer Gail White. And much like the process, the event has been blooming more with each passing year.

This year’s Mashed should have 40 brewers and about 100 beers to taste, she said, which is another sign of craft beer’s growth in Oklahoma.

“A brewing club that started five years ago with 10 members now has 80,” she said. “It’s definitely taking off in the [Oklahoma City] area.”

Mashed is a chance for the community to get together and share recipes and ideas — and drink, of course. White said that’s one thing that’s special about the local breweries and home brewers — they share.

“To talk to somebody in their position, to get information and advice from a pro, it builds a good rapport,” White said. “And it really comes back around, because the home brewers are the ones who really love craft beer. We all feel strongly about supporting our local craft breweries.”

There’s also an optional competition to be judged by Red Earth Brewers, with home brewers entering for hops, malt and best of show.

Because of Oklahoma’s laws, no beer can be sold by the home brewers and the tickets to the event are free, but limited. Only 300 tickets are available at Learn to Brew, 2307 W. Interstate 35 Frontage Road; The Brew Shop, 2916 N. Pennsylvania Ave.; and TapWerks. Mashed in OKC is a 21-and-up event.

But White said that might not be true next year. Organizers hope to grow Mashed into a bigger venue and split sessions as demand grows.