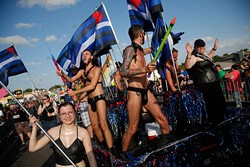 Michael Clark wandered his way into a leadership role with OKC Pride Inc. four years ago.

He has seen the community celebrate great victories and band together through heartbreaking tragedy during his time as the nonprofit LGBTQ rights organization’s president.

Of those hardships, none were as shaking as the news that 49 people were shot dead and more than 50 others were wounded June 12 at Pulse, a gay nightclub in Orlando, Florida.

Clark said he and OKC Pride refuse to waver in the face of violence and hate. OKC Pride Week continues as planned, stronger than ever.

A remembrance ceremony for Orlando attack victims is 7 p.m. Friday in the NW 39th Street Enclave, also known as The Strip, located at 39th Street and Pennsylvania Avenue.

“Pride began as a stand against violence and oppression. … No individual, organization or attack will drive us back into the shadows,” Clark told Oklahoma Gazette. “The recent events in Orlando prove that this journey is far from over. We welcome all to join us in support of the LGBTQ community.”

OKC Pride Week is known for its annual parade, set for Sunday, but over the years, a variety of awareness events and concerts have turned it into a multifaceted, citywide celebration, Clark said. Private security and the Oklahoma City Police Department will help keep this year’s events safe.

The 2016 OKC Pride Parade coincides with the one-year anniversary of the U.S. Supreme Court ruling affirming the right to marriage equality.

Lee Burrus, pioneering former owner of The Copa, Gushers Restaurant and The Finishline, will be honored as this year’s grand marshal.

The parade begins 6 p.m. Sunday on Classen Boulevard between NW 46th and 39th streets and then heads west down 39th Street past Pennsylvania Avenue and into The Strip, which also is the hub for many Pride Week activities.

“It’s big,” he said. “It’s the biggest parade in Oklahoma, and it just gets bigger every year. We already have as many parade entries as we had last year total.”

Clark said organizers have space for 108 art vendors and he expects to reach capacity.

Two things organizers are excited about this year are an expanded food court area and a bigger, better family fun zone.

A shaded spot and beer garden for food, drinks and rest will be set up in the Angles parking lot, 2117 NW 39th St.

Food trucks will park around the area beginning 5 p.m. Friday and throughout the weekend.

“We want to make sure everyone feels like there’s something for them,” Clark said.

Clark said Pride Week has more than doubled in size since he joined OKC Pride. Part of that growth can be attributed to the introduction of a concert component to the festival.

OKC Pride always aims high with its concert bookings and has brought in headliners like The Village People, En Vogue and Taylor Dayne.

This year’s Equality Concert headliner is First Ladies of Disco, a supergroup including previous OKC Pride performer Martha Wash and Evelyn “Champagne” King. Anita Ward fills in for the third member, Linda Clifford, for the OKC Pride show. The group has previously performed over recorded instrumentation, but Clark said its 7 p.m. Saturday set debuts a live backing band and the launch of a world tour. (Read the Gazette interview with Wash on page 38.) 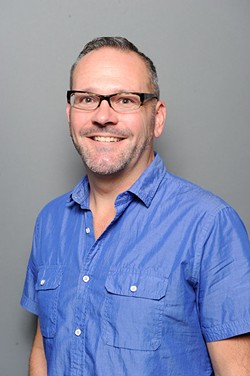 Clark was first approached about joining OKC Pride by a friend on the board who noticed he surrounded himself with many friends in the LGBTQ community. He started out as a volunteer coordinator. The next year, he became event chairman.

OKC Pride is a true grassroots organization, Clark said. Anyone who wants to get involved can.

Clark said he wants Pride Week to continue to grow while maintaining its homegrown sensibilities.

“You go to some bigger cities across the country and their pride celebrations are sponsored by all the big corporations,” he said. “In Dallas, they have 200 American Airlines employees marching in the parade. That’s the kind of stuff we should have here.”

The recent Pulse massacre was more than an assault on clubgoers, Clark explained.

It was an attack against what is often seen as the backbone of the LGBT community.

OKC Pride occasionally receives criticism for setting its core events around The Strip, historically known for its LGBTQ-friendly bars, businesses and churches.

Critics say pride should be about more than drinking and nightlife.

Clark said those complaints are shortsighted.

“The gay community started in The Strip where the bars are because it was a place people had to go to be themselves because they couldn’t do so in the general public,” he said. “That’s why honoring that history is important.”

He said it can be easy for some people, especially in the younger generation, to forget there used to be strict laws in Oklahoma against things like cross-dressing.

Drag performers could be arrested.

“Usually, they’d just beat you with the nightstick and leave you in the alley,” he said. “The pioneers that fought that stuff are one of the reasons we keep [Pride Week] in that area.”