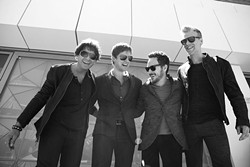 When Paul Doucette asked his daughter to illustrate a guitar pick design ahead of Matchbox Twenty’s co-headlining tour with fellow 1990s-2000s alternative rocker Counting Crows, she eagerly accepted the task and returned with an adorable portrait of her father within just three minutes.

“My daughter is incredibly talented,” Doucette said in a recent Oklahoma Gazette interview. “She’s a really great artist, and watching that develop is a whole other experience.”

The majority of Matchbox Twenty’s (MB20) many hits were released years before Mathilda was born. Many of them, including 1996’s “3 AM,” 2000’s “If You’re Gone” and ’02’s “Unwell,” in addition to a broad selection of similarly nostalgic tunes from Counting Crows, will be part of the collaborative A Brief History of Everything Tour. The world tour makes a local stop 6 p.m. Aug. 6 at The Zoo Amphitheatre, 2101 NE 50th St.

Parenthood is not the only thing that has changed for Doucette since the band’s turn-of-the-century heyday. Though MB20 — which also includes frontman, guitarist and independently successful vocalist Rob Thomas — was elevated to arena-level shows early its career, these days during live gigs, band members see almost as many smartphone cameras as eyeballs during their acclaimed sets.

Doucette, MB20’s former drummer and current rhythm guitarist, said that what also has come with the intervening years is savvy wisdom.

“Life in general is different,” he said. “We as people are different. But we’ve had 20 years of experience. When we walk onstage, we know what we’re doing.”

Doucette said Matchbox Twenty’s early popularity sometimes outpaced the growth of its bandmates’ maturity — both personally and professionally. The band’s ’96 debut album Yourself or Someone Like You was a smashing success, spawning radio hits and eventually earning diamond certification for more than 10 million sales from the Recording Industry Association of America (RIAA).

Great demand, Doucette said, put MB20 in front of huge crowds before it was fully prepared to put on a rock show. Two decades and over 1,000 shows later, general unease has been replaced with veteran confidence.

“It feels way more comfortable than it’s ever felt before,” he said.

The band’s bond with its fanbase has also strengthened as time has passed. Though the group has no doubt kept a large, devoted following throughout almost its entire history, it takes time — often years — for that relationship to mature from an obsession of the moment to a lifelong interest. Doucette said it never fails to impress him how many fans have stuck with Matchbox Twenty through the course of its on-again, off-again run.

“There’s a connection we have to [the fans] that’s definitely different than before,” he said.

The announcement that MB20 was heading out for a world tour might have surprised a few fans, though Doucette said bandmembers had been planning this run of show dates for a while.

The act went on hiatus in 2004 when former rhythm guitarist Adam Gaynor moved on to other projects. Doucette slid over from drums to replace Gaynor when the band reactivated in 2007 with a tour and the release of its compilation album Exile on Mainstream. Doucette actually slides back behind the drum kit for a few songs on A Brief History of Everything, momentarily relieving touring drummer Stacy Jones while revisiting some MB20 jams like “Back 2 Good.”

At the conclusion of the tour, the band again went into hibernation as Thomas focused on his solo career. MB20 began performing some shows together in 2010. It released North in 2012 and embarked on a pair of tours in ’12-’13, including a co-headlining run with Goo Goo Dolls.

Lead guitarist Kyle Cook stated his intentions to depart from MB20 in April 2016 due to communication issues and general disagreements within the band. His absence left some fans uncertain about whether MB20 would be able to tour in the near future. Less than a year later, however, it announced Cook (having apparently settled past differences) would be joining MB20 on Brief History of Everything. The tour, which began earlier this month, is the first time the band has played together in four years.

“You kind of walk onstage and you’re like, ‘I don’t know if I remember how to do this,’ but it all kind of fell back into place,” Doucette said, “which was great.”

MB20 is also using the tour to celebrate the band’s 20th anniversary.

“We’re a band with a ‘Twenty’ in our name,” he said, “so it would be dumb not to acknowledge the 20th [anniversary].”

Touring bands fortunate enough to mature to two decades are often faced with a similar choice in commemorating the achievement. Some choose to perform their debut album in its entirety, but Doucette said it felt more appropriate to MB20 to honor the band’s entire catalogue. A Brief History of Everything means just that — a collage of the many songs that made MB20 one of the early 2000s most memorable bands.

“We just thought we would rather celebrate our whole career up to now,” he said.

“That’s sort of how that goes,” he said. “‘Oh, you worked on this?’ Now that person who was a producer works on this next thing and they call you. I always ended up falling into that, and I really enjoy it.”

Two films Doucette worked on premiered in 2017, including thriller The Archer and the romantic drama 1 Mile to You, which stars Billy Crudup, the lead in 2014 Oklahoma-filmed and William H. Macy-directed Rudderless.

Doucette said he enjoys the contrast between film composing and the songwriting he contributes to with MB20.

“When you’re doing a film score, your job is to musically tell a story or to tell a subtext of the story, but it’s not your story,” he said. “When you make a record, it’s your thing — it’s your voice. As a film composer, you’re trying to capture what the director is going for, so it’s really almost more of a service industry job in a way.”

Doucette said he is working on a few other uncredited projects for other films but has little time to work on anything outside of MB20 while he is on the road.