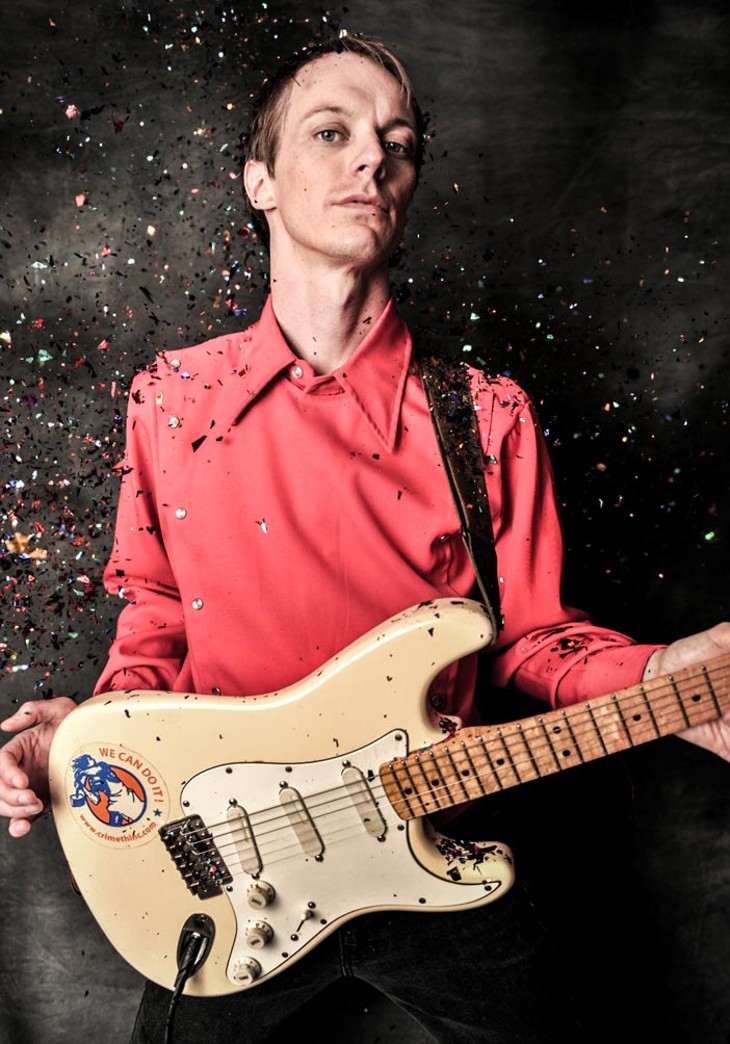 Nikolas Thompson is a professional in all things music, but scoring films is what’s currently keeping his hands busy.

A native Oklahoman, his professional path has landed him in San Francisco, Tulsa, and Seoul, South Korea. His extensive résumé includes a variety of titles: record producer, re- cording engineer, and guitarist and songwriter for his band Kite Flying Robot. On top of all that, he composes music for commercials and films.

“All-In,” written and directed by Jesserey Tugas, tells the true story of a Las Vegas bartender’s search for a man who abandoned his own daughter in a casino lounge.

As a kid, Nikolas was captivated by Danny Elfman’s music for the film Edward Scissorhands.

“It was the first time that music from a movie really shook me, and I had my mom buy me the soundtrack, which I still have 30 years later,” Thompson said. “I was probably the only kid in my neighborhood that had so many movie soundtracks—Indiana Jones, E.T., Fargo, Batman Returns, etc. I played guitar in rock bands growing up, and figured writing movie scores was way out of my skill set, which it was at the time.”

In 2012, Thompson decided to move to South Korea to enjoy the adventure of expat life and pay down debts while teaching English. What was a one-year plan to live and work there became a four-year stint that included work in the expat music and theatre scene in Seoul.

After performing in bands for over a decade, he stumbled into a chance to realize his life-long dream of professional composing. He was approached by a media company in South Korea that was founded by the same person who had directed some music videos for Kite Flying Robot.

“My first real scoring gig was for the Marriott Hotel in South Korea in 2013. It was an opportunity, trial of sorts, to see if I could do it. Luckily the media company liked the music, I got over my initial nerves, and I’ve worked with the same media company a dozen times since,” Thompson said.

His history of creating synthesizer music meant he’d been dubbed stylistically as “the 80s guy,” but he craved more variety in his musical styles. After returning to Oklahoma in 2016, Thompson decided to dig deeper into the technical side of music composition and enrolled in a summer music theory course, then completing a master’s in music composition at Oklahoma City University. This training expanded the possibilities of his sonic palette and prepared him to write for a wider range of musical instruments and ensembles, including orchestras.

“I think every piece of music needs one great element to spark excitement and then build from. If I can get a good chord structure, or melody, or texture, or rhythm to start with, the other elements tend to fall into place. That initial idea gives the musical piece its identity. So, in the beginning I try to start writing more from the gut than the brain, like come up with a dozen crazy unique ideas in hopes one of them is actually worth pursuing.”

After that, he determines the other elements, like arrangement ideas, exact orchestration, texture, etc.

Thompson has a creative background, and that education enhances his scores whether it’s “just a palette of sounds, whether it’s strings or synths or thrift store Casio sounds or what- ever.” He has pretty much everything he needs in his home studio, including musical instruments, a music library of reference books, amplifiers, and the software to bring it all together in re- cording and creating musical scores (sheet music) for orchestras.

Through the collaborative process on film or commercials, Thompson prefers to be included in pre-production, but it’s more often the case that he’s hired after filming, in post-production.

“They’ll send me rough edits for the scenes they want music in, and I’ll sketch out some ideas for them to listen to, which is usually trying to match the ‘vibe’ more than anything. Sometimes directors have a very clear idea about what they want, but often they don’t.”

“For ‘All-In,’ the director Jesserey Tugas wanted music that was classic Western, with a tinge of Vegas flavor but with a modern film score feel. We emailed ideas back and forth and ultimately the music included strings, loungey-sounding electric piano, guitars, jazzy drums, hand percussion, and solo violin which was performed by OKC-based violinist Jose Batty. I used some modern sound design to keep it sounding current,” he said.

Thompson is currently in the middle of writing a couple new film scores and composing for art projects that are currently under wraps. He’s also nearly finished producing an album by OKC- based singer Cheyanne Marie. A single and music video for the project will be released soon.

“Some songs I helped compose and some songs I am just producing and mixing. She’s an excellent singer and performer, and we’re excited to release it,” he said.

Once all that is completed, he’ll be able to get back to a personal project— the third Kite Flying Robot album, which has been on the back burner.