Maturing from a pop-up, Nonesuch takes diners on an Oklahoma journey with modern techniques

Chef Colin Stringer has spent hours working on the ingredients for a chicken terrine made with foraged morel mushrooms and cooked with the same local lovage used to make a pair of accompanying sauces, but he can’t get the plating the way he wants it.

Over comes chef Paul Wang, who arranges the dish — four bites with every ingredient hailing from Oklahoma — in a completely new way.

Each bite is a microcosm of the ethos of Nonesuch, which uses ingredients from small local purveyors or foraged by Stringer and chef Jeremy Wolfe over the years. Every composed bite on its rotating eight-course tasting menu asks guests to enjoy the palate interplay of umami, acidic and sweet flavors.

Wang moved from Los Angeles to join Stringer and Jeremy Wolfe on staff at Nonesuch after attending a dinner with the private chefs-for-hire supper club Nani started with Andon Whitehorn. Stringer and Whitehorn were named “young guns” by Eater, but Nani was shut down by the Oklahoma City-County Health Department for not submitting to restaurant inspection.

Local restaurateur Todd Woodruff (Waffle Champion, Maple’s Barbecue) contacted Stringer and Wolfe and gave them a home for what became Nonesuch in 2016 by hosting weekly pop-up dinners at Waffle Champion. 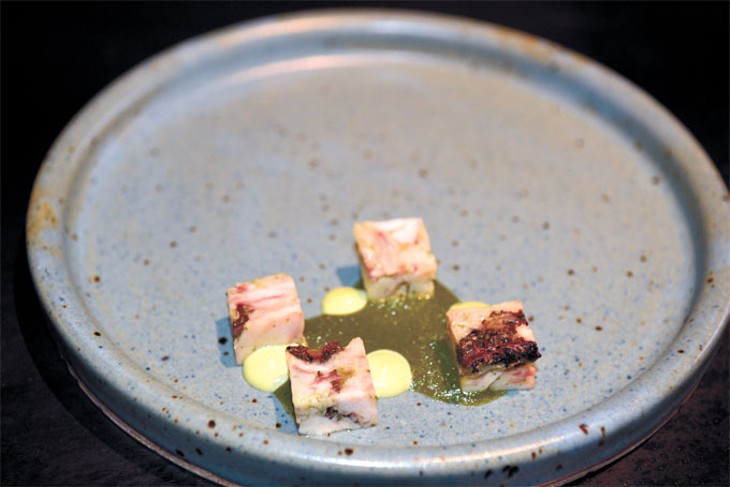 Woodruff serves as the owner of Nonesuch’s permanent location, which opened at 803 N. Hudson Ave. in October. Nonesuch is open 5-10 p.m. Wednesdays-Saturdays. Reservations are made in advance and range from $50 to $60 a person, depending on the time of the day.

The staff seats a maximum of four people in the 20-seat restaurant every 30 minutes for an eight-course meal that changes every day or two.

“Oftentimes, people try to curate their own experience, but here, it is the opposite,” Stringer said. “There is a letting loose of control. It takes a certain diner, for sure. A lot of people that are unsure find that they do enjoy it. Throughout the meal, you’ll see a couple where one person was really wanting to come or they surprised a partner. You can see their faces changing over the first few courses and relaxing into it.”

Wang first tasted Stringer and Wolfe’s food at Nani while interning at an Oklahoma farm. He moved to Oklahoma City permanently as Nonesuch matriculated from pop-up to its own brick-and-mortar location.

“In the short time since we opened last October, we’ve grown into a family,” Wang said. “We see each other more than anyone else. We spend close to 60 to 70 hours a week here.” 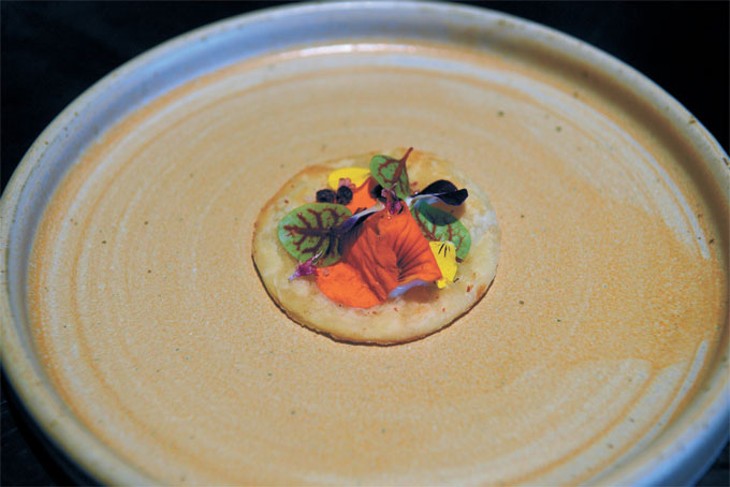 Even during the dead of winter, with ice on the ground outside, Nonesuch is able to keep a steady supply of local ingredients thanks to small purveyors like Oklahoma City’s Prairie Earth Gardens, which supplies 80 percent of Nonesuch’s produce, Stringer said.

The rest of the ingredients — much of which have been foraged by Stringer and Wolfe over the years — can be found dried and stored in the kitchen’s large larder that overlooks the U-shaped dining room.

“Being limited has helped us spark a lot more creativity out of necessity. If you look at our larder, a lot of it has been emptied out because we’re waiting for spring to come. Everything is so personal,” Wang said as he turned his attention to three shelves of the dry pantry on the opposite end of the kitchen. “Those beans were grown and dried by a farmer in Yukon. Who else has a pantry where they have things dried by their own farmers? Everything has a story, and it’s fun to share that with our guests. It’s been the most unique and rewarding part of working here.”

When Stringer and Wolfe started the tasting menu concept at Nani, many of the plates were Japanese-influenced, using a lot of fresh fish under the guidance of Whitehead.

The duo used their time as a pop-up to put the focus on Oklahoma ingredients, serving dishes that are inspired by both rustic and modern techniques.

Stringer presents what he describes as a pork heart cracker, a crispy disk of pork fat that is topped with slightly sour yogurt, sweet red bell pepper and herbaceous flower petals.

“Everything [we serve] is about the complexity of the dish,” Stringer said.

Wolfe has proficiency in savory dishes, but he’s the best dessert maker on the staff. He presents a basil crème anglaise ice cream served on top of a fennel seed crumble topped with reduced Turmeon vermouth syrup.

“Turmeon has five different aphrodisiacs, so it’s been used in a lot of love potions over the years,” Wolfe said with a smile. “We’re really stoked to be in the permanent location. We spent years planning, and our food has gotten better as we get more equipment to push ourselves in a way we couldn’t before.”

Stringer said that 90 percent of the guests make reservations through the ticketing system Tock, which allows for dynamic pricing. Tickets cost $50 per person on Wednesdays but are $60 per person 6-9 p.m. with $50 slots at 5:30 p.m. and 9 p.m. other days of the week.

Nonesuch can accommodate walk-ups occasionally, but Stringer urges guests to book through its website (nonesuchokc.com) or by calling 405-601-9131. If food allergies are made known during reservations, the kitchen staff will adjust the menu accordingly.