With D’Angelo, Erykah Badu and Lauryn Hill in the wings, the sultry singer helped pioneer the neo soul movement in the late ’90s. 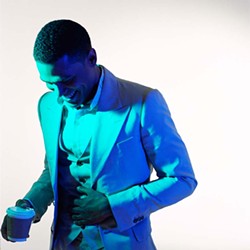 Maxwell sits and smiles as Frank Ocean, Janelle Monáe and Miguel grab headlines and Grammy nods. Memories rush back with each achievement; he was standing in those same shoes not too long ago, a fresh face introducing a new generation to R&B.

With D’Angelo, Erykah Badu and Lauryn Hill in the wings, the sultry singer helped pioneer the neo soul movement in the late ’90s, taking a genre that had been ignored and cheapened and elevating it back to a commercial and critical high-point. Now you find a new class doing the same again, each voice joining the choir and making R&B that much stronger and inescapable.

“[R&B] was passed on to me by people I love, and thank God it’s been passed on to them,” Maxwell said of the newest class of acolytes, noting a particular admiration for Ocean. “They are killing the game.”

He is hardly a fossil, though. Happy for the new kids but not content to fall into the background, Maxwell is 41 years old but croons with the same vitality he did two decades back while performing in support of his seminal debut, Maxwell’s Urban Hang Suite.

His songs have stood the test of time, and his profile has stayed steady for just as long, a direct result of a younger Maxwell’s consideration for how his songs would sound at 50 years old and beyond.

“If I can write a song that means so much that it doesn’t need a new album to be excitable, then I’ve done my job,” the Brooklyn native said. “I get bored pretty easy with the industry and business of releasing albums. It’s mainly going on the road and seeing how your music has touched everyone. That’s the part that turns me on more.”

Maxwell has done more than turn himself on over the years. His sensual ballads found in his 1996 debut, 1998’s Embrya and 2001’s Now heated up headphones and bedrooms alike, all three albums going platinum in the process. An extended sabbatical eventually yielded BLACKsummers’night, 2010’s Grammy winner for Best R&B Album and another commercial hit with over a million copies sold in thanks to his Male R&B Vocal Performance winner, “Pretty Wings.”

That fourth studio album is the first in a trilogy long in the works, and it was also subject to a number of delays described as an unfortunate but necessary byproduct of making sure the full story hits all the right notes.

“People give me a lot of shit about when the album is coming out, but it’s nice for them to know that deep inside, he may take time, but he sure does care,” Maxwell said. “I don’t like to be out there just to be out there, like ‘Hey, I’m in class, guys.’ I only want to show up when I can contribute to the conversation.”

The second entry — a hi-fi, gospel-leaning record he claims sounds like nothing really made before — is due within a year’s time, with a love-centered record to follow that will close out the series. Perhaps taking cues from the new school of thought, Maxwell said he just stumbled upon the perfect method for rolling out those final two installments of the trilogy in a way that should be a “big surprise” (without divulging any details), confident the end product will satisfy your soul and his.

“When it comes down to getting that food,” Maxwell said, “I know what’s nutrition and what’s junk food — and when it’s time to put down the potato chips.”