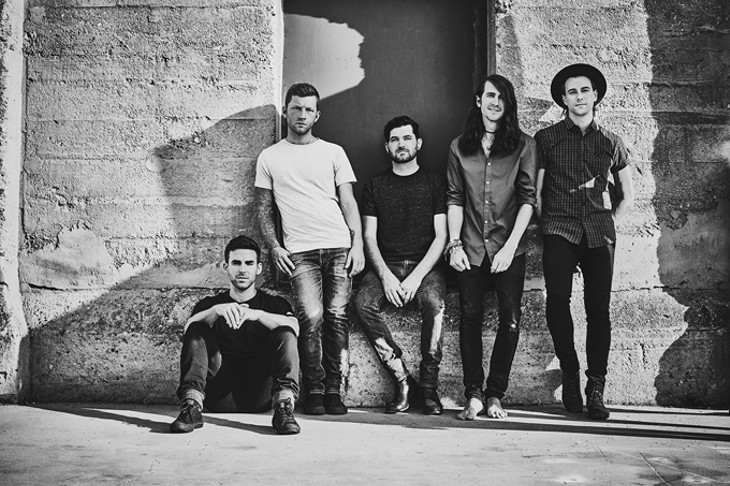 Baseball-sized hailstones forced cars to the side of the road. It was Mayday Parade’s harsh introduction to Oklahoma’s sometimes-brutal weather.

Betts recalls riding in a van six or so years ago somewhere between Tulsa and Oklahoma City. The quintet peered out its windows as a funnel lowered from the sky. Ice bludgeoned the roof.

“We didn’t see anything touch down, but the whole time, it was swirling right above us, threatening to drop down,” Betts said.

Fortunately, no musicians were harmed, Betts said, but the incident sticks out as one of the band’s more memorable and tense tour moments.

The American Lines Tour is a co-headlining venture with Tempe, Arizona, band The Maine. Both acts are still in the process of promoting 2015 releases: Mayday Parade’s fifth studio album, Black Lines, and The Maine’s American Candy.

The two rock acts started out as Fearless Records labelmates and performed gigs together over the years. Earlier this year, they toured the United Kingdom before heading stateside.

Betts said both bands have many of the same fans. He also enjoys touring with The Maine because it’s a fun band to hang out with.

“On the other side of things, there’s no surprises,” he said. “It’s not like you have to warm up and get to know a whole new group of people, including crew, too.”

Nashville alternative band Better Off was scheduled to join the tour, but it indefinitely suspended all commitments after sexual assault allegations were made against fill-in bassist David Hobbs.

Betts said he never got a chance to properly meet Better Off, though they did perform one tour date together. He did not believe their absence would negatively impact the tour.

“They had their own things to deal with,” he said.

It’s hard to judge fan reaction to Black Lines. From a traditional, numbers standpoint, Betts admitted it doesn’t look as strong compared to previous projects. Their last two records debuted inside the Billboard Top 12. Black Lines peaked at No. 21.

Even so, Betts said tour attendance is solid.

“There’s more people coming out than there was in the past,” he said.

Mayday Parade is always mindful of what fans want and expect, but Betts doesn’t let those expectations rule everything he does. In 2012, he began a side project called Truth or Consequence with Alexandra Kees and bassist Jeremy Lenzo. Their folk-country sound is a significant departure from the emo-rock sound Betts is best know for.

Truth or Consequence represents the music Betts attached to while growing up in the South. In a March 13 Facebook post, the trio announced it was preparing new material and ended more than three years of silence following the 2012 release of its debut EP Second Fiddle.

“It’s something I was doing on the side because I want to be able to put out some music that has that sort of influence — more folky, country, bluesy — all those things I felt like we really couldn’t do with Mayday Parade,” Betts said. “I wanted an outlet for that, and in that way, it’s very personal and I feel like I can get away with a lot more storytelling, at least in the country sense.”

Betts said they have a lot of unreleased material. He didn’t abandon the project. Instead, he’s waiting for the right time.

Mayday Parade is nearing the end of its contract with Fearless Records, meaning it’s the perfect time for the Truth or Consequence vocalist to focus on other things while Mayday Parade negotiates a new deal or finds a new label.

There’s no target release date or estimated length for a follow-up Truth or Consequence project at this time, but Betts is eager to get new work out soon.

“I think the first release that we did was kind of to just get something out there to see how it is and how I feel about it,” he said. “I think it’s something we’ll definitely continue and maybe do a little bit more of.”

The American Lines Tour ’16 with Mayday Parade and The Maine