McLoud Blackberry Festival honors the town’s history with a good, old-fashioned community affair, including a parade, pageant and, of course, general admiration of the dark, tart and juicy edible aggregate fruit. 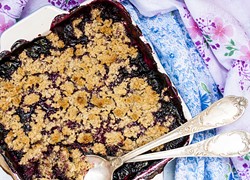 Blackberries grow wild throughout the backyards and backroads of McLoud, but there was a time when cultivating the beauties was big business.

As a clever marketing maneuver, a blackberry grower’s association shipped a box of its finest blackberries to our 33rd president and made an impression. Moved by the gift and impressed by the quality of the fruit, President Henry S. Truman declared McLoud, Oklahoma, the official Blackberry Capital of the World in 1949.

The quaint community located about 30 miles outside Oklahoma City in Pottawatomie County, maintains its cozy, small-town identity, and the Blackberry Festival is a big part of its tradition. Even though blackberries are no longer the lifeblood of the economy, the festival has seen huge growth with big developments in the works.

“This year is a restructuring [of] the event. We are doing things we’ve never done before,” said Melanie Krause, McLoud Chamber of Commerce office manager. “We have new food vendors who must use blackberries in at least one of their menu items.”

That includes a vendor that incorporates blackberries into its cinnamon rolls and a barbecue joint that cooks them into its barbecue sauce, she said.

McLoud Blackberry Festival honors the town’s history with a good, old-fashioned community affair, including a parade, pageant and, of course, general admiration of the dark, tart and juicy edible aggregate fruit.

Of course, there will be the traditional blackberry preparations, including plenty of cobblers, ice creams and jams. The “cobbler gobbler” eating contest gives hardcore blackberry lovers the chance to indulge their competitive side.

“There really is something beautiful about happy faces covered in blackberries,” Krause said. “It’s such a fun event, and everyone gets a kick out of it.”

The festival also features a parade with floats and Native American tribes performing in full regalia. The Blackberry Pageant lets local girls compete for the chance to represent the town as part of her reigning duties.

“This year’s pageant is one of the biggest groups we’ve ever had,” Krause said. “There is a dance contest, and the girls can show off a talent. … The winner will represent our town for fundraisers and other activities.”

In addition to about 40 vendors selling arts, crafts and other retail items, there will be carnival rides, a car show, live music and even an Elvis impersonator. Admission to the family-friendly event is free.

“It’s a good, small-town festival that you can go to with your kids,” Krause said. “We are only about 20 minutes or so away from the city, but we are one of those hidden treasures that hasn’t been taken over by big city stuff.”

The indefatigable berry bushes and brambles still run strong throughout the town.

“They’re wild everywhere here still. Though it’s not what keeps our town running anymore, there are some farms locally [that] provide all the berries for our event,” Krause said. “It’s pretty incredible how versatile a blackberry can be in an area where they had a lot of blackberries.”

The event wraps up with the crowning of the new Blackberry Pageant winner, a performance by The Wise Guys and a fireworks show. Admission is free.

Print Headline: Bramble on, McLoud devours its legacy as the Blackberry Capital of the World during its annual festival.