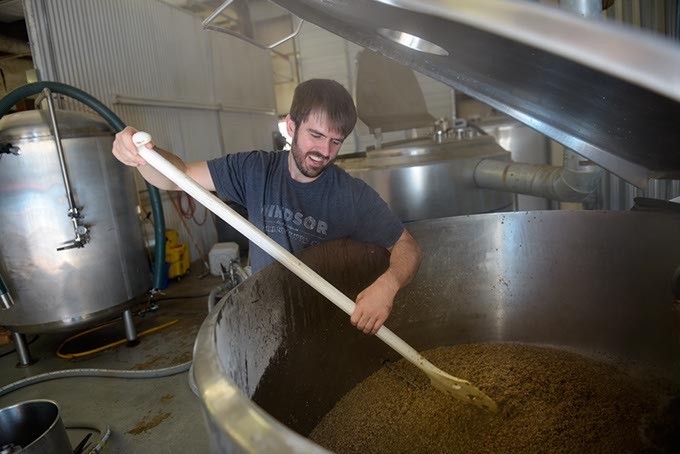 Trae Carson wants you to taste the music. Carson, who co-owns (405) Brewing Co. with Jonathan Stapleton, spent a late-March morning in the Norman brewery mixing ingredients for his newest beer. He said its origin story is only slightly embarrassing.

“We’re getting ready to brew Last Friday Night,” he said. “It’s from a Katy Perry song. I’m 35 now, but I was thinking, ‘What does a 25-year-old want to drink?’ They all want a crushable craft beer.”

(405) hasn’t created an IPA before this one, so Carson went about designing a “party-style” India pale ale.

“We find inspiration from all different places,” he said. “We’re not really paying attention to what someone else brewing. We just follow our own lead.”

Freedom to go their own way is a gift from the great local brewers who fought to make Oklahoma a beer-friendly state, Carson said.

“Some great companies have come in here and really paved the way for us. COOP [Ale Works] has only been here for eight years, but it feels like it’s been around for 25. They educated the consumer and excited people about local beer,” he said. “Prairie [Artisan Ales] exposed the world to Oklahoma beer.”

For years, Oklahoma didn’t have a beer the rest of the country knew about, Carson said.

“Obviously, we’ve had some great beer here for a really, really long time with Choc,” he said. “But in the last eight years, Oklahoma has begun to define itself.”

He ought to know. Travels with his family included looking for small-label beers that would inevitably find their way home. His house looked like that of a craft brew hoarder.

“That always meant searching out new local beers we couldn’t get in Oklahoma. That was an aspect of the places you went, finding these rare, really cool beers. You got a real flair for that area of the country,” he said. “North Carolina beer is different than San Diego beer. And you learn about all these different varieties of beer and techniques.”

Those family vacations and his 2007 bachelor party trip — in which he, Stapleton and two other friends spent nine days tracing a teardrop of breweries through St. Louis, Missouri; Chicago, Illinois; Milwaukee, Wisconsin, and others in the northeast — helped define what (405) would become.

And in some ways, Carson said, they’re still defining it.

“Our philosophy is FDR: Fuck the Damn Rules,” he said. “We have no desire to brew to style or guidelines.”

Their one aim is to make beer that tastes good. Some of (405)’s flavors might be challenging, but Carson is confident that once people try it, they’ll accept nothing less.

“Not everyone loves sushi, but before people first try it, they are skeptical,” he said. “Once they have it, though, they love it.”

Labeling laws require the brewery to list a style with each beer, but Carson said he’s more interested in trying new flavor combinations than adhering to some age-old beer description.

One thing is true, though: If you’re looking for hops, you might want to look elsewhere.

“Some of the best IPAs in the country are made by Roughtail [Brewing Co. in Midwest City]. They showcase hops. We like to showcase yeasts,” he said.

(405) uses several yeast and bacteria strains throughout the year, including wine yeast, to draw unexpected flavors from its beers.

“Yeast is the most dominant flavor in beer if you let it be,” Carson said. “Some yeast strains are very clean. A lager yeast strain fermented at a colder temperature takes longer to ferment but doesn’t leave a lot behind. But just like people, yeasts have so many different characteristics and properties. They’re going to create alcohol and CO2, but they might also add a funky component to the beer, or spice or fruit flavor, even without adding any fruit.”

Playing with different yeasts allows the brewery to create fun flavors, including another pop-inspired beer, last year’s Cool for the Summer.

“I’m a pop music junkie,” Carson said. “I was listening to the song [by Demi Lovato], and I thought, ‘What would pair with this song?’”

Lovato is light, but a little edgy, so he chose a light grain with locally foraged spearmint and some lime, which gave the beer an acidic kick with cool undertones.

“At the end of the day, the business is there to be a business and make money, but that doesn’t mean we can’t be fun and creative,” he said.