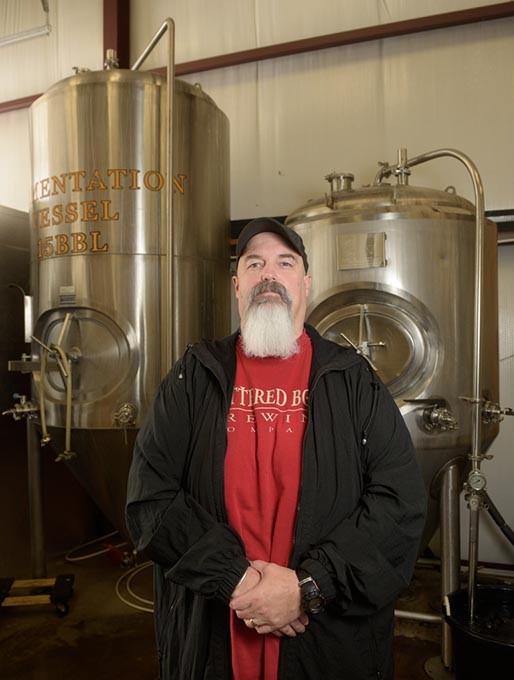 Mike Sandefur is a natural raconteur. A man with both a past and a beard that are long and varied, he is something akin to a giant treasury of entertaining stories. Follow any one of them and you’ll soon arrive at one of Edmond’s Battered Boar Brewing Company’s signature beers.

Even the brewery’s name begins with a thrilling tale.

Not only did the boar give its name to the brewery, it gave its head to the taproom, 14700 Metro Plaza Blvd., Suite E, in Edmond that is under construction.

Sandefur is an imposing figure well before he begins telling you about knife fighting.

The big man can look deadly serious when he wants to. Were Sandefur just a giant, he’d be scary enough, but it only takes a short conversation before you realize the sharpest blade in his repertoire is his keen mind.

In the past, he has held several jobs, including more than a decade teaching law enforcement and military personnel about close-quarter knife fighting. Since 2009, he has been dedicating his brains to a different kind of pursuit: brewing amazing beers.

That’s its own story. Sandefur was teaching knife combat when one of his students came to him looking for inspiration.

“There’s artistry in everything you do,

whether it’s making furniture or brewing your own beer,” he said. “So we went to The Brew Shop and I bought a brew kit.”

Though his student didn’t get into making beer, Sandefur was immediately obsessed.

“The first year, I think I brewed about 200 batches of beer,” he said. “Every flat surface in the house had a fermenter on it.”

That was when his wife Michelle said it was time to make a go at brewing beer in a professional setting or at least get it out of the house.

Battered Boar is a small craft brewery known for big beers. It’s not well-known locally, though. For the past few years, the company focused on selling outside of Oklahoma, garnering sales in Georgia, Texas and Arkansas.

But Sandefur said that changed last year with the passage of Senate Bill 424 and other alcohol modernization legislation.

“It’s frustrating to not do business in Oklahoma,” he said.

Regulations made the cost of selling beer in-state an onerous task. But with a slew of rule changes, it’s becoming much easier to return to the market.

Sandefur was born and raised just a few miles away from the brewery. Nowhere is home to him like Oklahoma, and finally, Oklahoma is ready to be a real home to Battered Boar, too.

As the state’s thirst for craft beer grows, the brewery is poised to introduce a variety of different beer styles to consumers.

Best sellers like LaPadite Farmhouse Ale and Lion’s Tooth Floret will certainly continue. Sales of Coconut Cream Stout are so strong that every drop Battered Boar brews is quickly out the door.

Sandefur hopes the same will be true for his new creation, Boarchata, a beer made with a type of Mexican cinnamon he found immediately alluring.

“It has this delicate flavor that is so expressive I had to build a beer around it,” he said. “All of our beers are ingredient-driven.”

“Remember that day, Michelle?” he asked his wife. “We spent an hour on the phone just tasting chocolate. That was a good day.”

Aptly named Dantes Porter features 112 different types of chilies that provide a burst of heat that quickly fades, leaving behind the fruity undertones of peppers on the drinker’s palate.

All of Battered Boar’s brews require inspiration. Sandefur’s not interested in creating a type of beer just because other breweries are making it. He needs an idea, a way to twist the formula and give customers a taste of something unexpected. He is able to wait for his imagination to run wild because Battered Boar belongs solely to his family. His son Jordan is the lead brewer and chief advocate for the company, helping bring in new sales as the brewery expands its reach.

“The great thing about beer is that for a few dollars, you can buy some of the best stuff on the planet,” he said. “It’s an attainable luxury item. Try doing that with wine.”

As the taproom nears completion — Sandefur predicts it will be open within the next month — he is looking forward to establishing Battered Boar as a favorite among local beer enthusiasts. While Chocolate Cherry Porter and seasonal Ultimo Hombre, a dry-hopped wheat beer named for a line in No Country for Old Men, might not be feasible for bottling and shipping, he’s going to make sure visitors to the taproom can have a try.

He’s putting his expert palate to work creating new beers, as well. In the coming months, Battered Boar will release Funky Mime, a grapefruit sour beer, and Stumbling Goat Imperial Coffee Stout, which gets its name from a legend of how coffee was first discovered in Ethiopia.

Sandefur proved he can develop the recipes. His encyclopedic knowledge helps give the beers intriguing names. And when guests enter the taproom, he can regale them with tales of how the brews came to be. For a man so adept at storytelling, it’s the perfect situation. What goes better with a good beer than an interesting story?