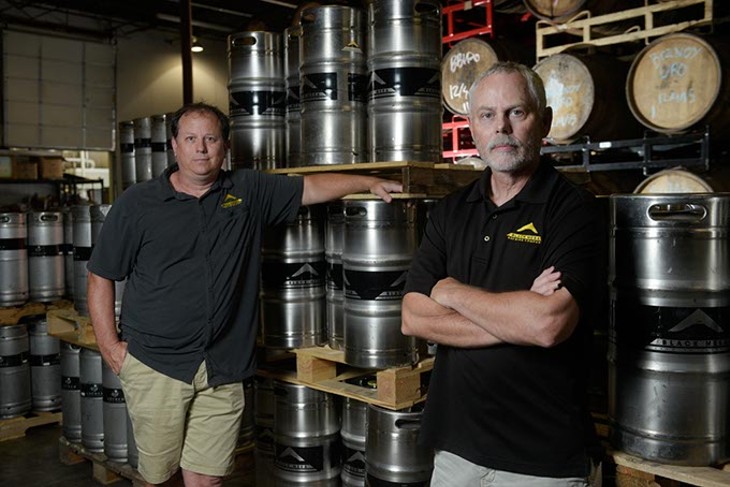 On the afternoon of May 31, 2013, the only thing running through Black Mesa Brewing Company founder Chris Sanders’ head was “Get out of the way.”

The EF3 tornado that began in El Reno and affected Oklahoma City is the widest ever recorded by the National Weather Service, leaving 2.6 mile-wide path of destruction at its peak.

The next morning, Sanders checked on his brewery on Sheridan Avenue, which had not even been operating a year as part of an Oklahoma City brewing co-op, and discovered his equipment, including four tanks of finished beer, was completely destroyed.

“The roof lifted off the ground and came back down,” Sanders said. “It trashed all of the brewery equipment. The rest of the building was fine.”

In the storm’s aftermath, the co-op, which also included Redbud Brewing Co. and Anthem Brewing Company, went their separate ways. Black Mesa was without an Oklahoma home.

Sanders, 57, a retired firefighter and Midwest City native, holds his Oklahoma roots close to his heart. He named his brewery after the highest point in the state, and his signature beer Endless Skyway (which won first place in the English style bitter category at the 2014 World Beer Cup) is a nod to the Woody Guthrie anthem “This Land Is Your Land.”

When it came time to find a new home for Black Mesa, Sanders settled on O’Fallon Brewery in St. Louis after meshing with head brewer Brian Owens, even though it meant contracting outside his home state.

“I trusted Brian because we brew the same way,” said Sanders, who graduated from a program at the University of Wisconsin sponsored by the Master Brewing Association after retiring as a firefighter.

Black Mesa returned to Oklahoma City in April and worked with Urban Farmhouse Designs when O’Fallon increased its production from 15 barrels to 50. Sanders and partner Ole Marcussen hope to break ground on their own brewery later this year.

“It’s been so important for us to come back to Oklahoma because this is my home and where I lived all my life,” Sanders said, noting that his brewery will bring six to eight jobs to Oklahoma City once it opens.

Sanders and Marcussen, a retired civil engineer originally from Norway, met in 2011 when Marcussen’s Yeasty Boys beer club took a field trip to a brewery where Sanders had worked after he graduated from the University of Wisconsin program.

The two stayed in touch, and Marcussen, a homebrewer for more than 20 years, has helped develop recipes — including Black Mesa’s award-winning Endless Skyway — from the beginning.

Early this year, Marcussen became a full partner in the business.

“Like every homebrewer, my dream was to open a brewery,” Marcussen said. “I mostly did IPAs because it is the best-selling craft beer. I’ve seen breweries that used to say they’d never brew an IPA, but they have one now. You have to sell one to stay in business.”

Black Mesa’s is Big Wheel IPA, which is brewed in more of an English style and is an example of the brewery’s mission to blend European and American flavors.

“American IPA can go extreme on the hops,” Sanders said. “Our beers are brewed in an Old World style, but we use American hops, so it gives in a modern twist. We want them as close to the original style as possible. We don’t add offshoot flavors or fruit.”

Endless Sky ESB and Mountain Boomer Kölsch are examples of European styles that Sanders and Marcussen wanted to brew stateside. It has required some education on the part of the consumer.

“When you tell them it stands for Extra Special Bitter, the person might say, ‘Oh, I don’t like that.’ But once you explain that is not that bitter, it’s more [of a] caramel, malty taste, they usually think it’s great.”

Sanders was watching from Oklahoma via laptop livestream when the Endless Sky was awarded the gold medal in the ESB category at the 2014 World Beer Cup, beating out a brewery from South Korea and numerous breweries in England, where the style originated.

“It meant a lot because it’s the Olympics of beer,” Sanders said. “We got a nice plaque and a lot of recognition.”

The Mountain Boomer pairs the nickname of the collared lizard, Oklahoma’s state reptile, with the style of beer born in Köln (Cologne), Germany.

“ESB and Kölsch are really starting to gain in popularity in the United States,” Sanders said. “It’s a balance between hops and malt.”

Cave Dweller Red Ale is Black Mesa’s fourth year-round offering. Sanders said that a traditional red ale trends toward a malty finish, but they aimed for a red ale with more hops. But he had the most fun creating its name.

“There are some caves in the Black Mesa region, and we threw out that there were prehistoric people searching for the perfect beer,” Sanders said.

Bringing on Marcussen as partner isn’t the only change Black Mesa made at the beginning of this year. Sanders hired a local graphic artist to create new designs for the switch from four-packs of bottles to six-packs of cans, which echoes a larger shift in the craft beer industry.

No longer are cans only for big beer companies, as improved technology has led breweries and consumers to have more faith in the aluminum packaging.

A national Brewers Association study comparing the percentage of can sales to bottle sales shows the former has increased every year since 2011. New technology has allowed for lids to accentuate aromatics, and in Black Mesa’s case, it allows for easier stacking on shelves.

The label redesign allows the can to stand out and avoid what Sanders referred to as “urban camouflage” among many other craft beers on convenience store shelves. The big wheel on the IPA dresses up the childhood favorite like one of Evel Knievel’s motorcycles, and the Kölsch puts the bright colors of the collard lizard on full eye-popping display.

“We’re a gateway for people coming from unflavored pilsner into craft beer,” he said. “We want to give you beers that are easy to drink and not scare off the new craft beer person.”