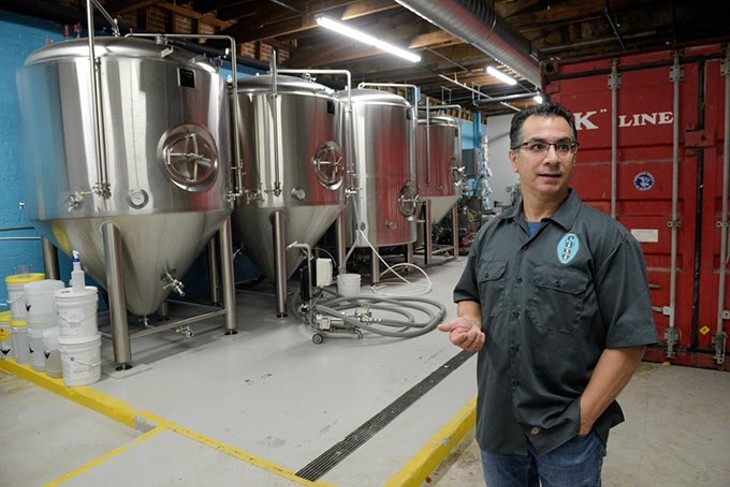 Plywood still covers the windows at 1 NW 10th St., located just a few feet away from where cars thump-tha-thump over the railroad tracks dividing east and west Oklahoma City. You know you have arrived at the right place because a banner on the building’s east side reads Twisted Spike Brewing Co.

A giant logo is painted on an inside wall and is visible from what will soon be Twisted Spike Brewery Tasting Room.

Building the taproom was a leap of faith for owner and brewmaster Bruce Sanchez.

“In the pre-[Senate Bill] 424 days, the taproom or anything associated with the brewery had to be owned by a different entity, but we anticipated the change,” he said.

Right before the law took effect in late August, Sanchez and dozens of brewers and beer enthusiasts crowded into a monthly Alcoholic Beverage Laws Enforcement (ABLE) Commission meeting to protest the agency’s decision restricting breweries from serving cold, full-strength beer in their taprooms. The decision was overturned after State Attorney General Scott Pruitt guided ABLE in interpreting the law.

Taprooms are important in making new breweries fiscally viable, Sanchez said. After he and others invested tens of thousands of dollars into Twisted Spike, an adverse ruling on SB 424 might have doomed the fledgling company.

His love of beer extends even further. In 1982, as his friends drank Coors and Miller, he preferred German imports like Beck’s Dark.

At a time when no one knew about craft beer, he tried a batch made by a homebrewer so tasty that it inspired him to take up the hobby himself.

The batches outnumbered his sons, but family commitments and strict Oklahoma liquor laws kept Sanchez from expanding his passion for brewing beyond much more than a hobby. Being an electrical engineer for the Federal Aviation Administration is much less risky than opening a brewery, Sanchez said.

“Ever since getting my MBA (master’s of business administration degree), I’ve wanted to own my own business,” he said. “But I had three young sons, and the laws were so prohibitive for so long.”

Sanchez was a successful homebrewer. He entered many of his creations into competitions and earned medals and valuable feedback along the way.

“The beer is always good when someone is at your house, drinking for free,” he said. “Honest feedback comes from certified judges.”

In the last several years, Sanchez’s beers placed in the top three of the National Homebrew Competition (NHC) seven times. In 2014, his Cherry Grand Cru earned first place in an NHC regional event and second place overall in the national competition.

“I want this to be beer nerd central,” he said as he toured the taproom.

Designed with the nearby railroad tracks in mind, the room is decorated with converted shipping containers. A 40-foot container was cut down by a few feet to fit inside and will serve as his bar. Between the brewery and the tasting room, a pair of containers were welded together to create an enormous refrigeration unit where bottles and kegs will be kept before they’re sent to consumers.

Sanchez seemed nearly giddy as he opened the cooler to show off his first batch of kegs, which will soon be en route to bars and restaurants.

“I get at least five Facebook messages and three calls a day asking when they can get a keg or a growler or anything,” he said.

The wait is nearly over. Sanchez said he’s planning a Dec. 10 grand opening.

He said that date was made possible with support of the local beer community, especially his friends at COOP.

Both the Twisted Spike brewery and its taproom fit into the small 1927 building because of arrangements he made with COOP to make Sanchez’s wort, the liquid malt that converts starches into sugar.

COOP brews the wort off-site and Sanchez adds it to his on-site fermenter, where the sugars are then converted to alcohol. The partnership was borne from a mutual respect and desire to grow Oklahoma City’s beer scene.

Twisted Spike is one of around 20 licensed breweries in the entire state, Sanchez said, whereas the city of Longmont, Colorado, located just northeast of Boulder, has at least that many.

His brewery’s primary focus is Belgian-inspired and American beers, including Black Snake Russian Imperial Stout, which earned the No. 3 slot in Gazette’s Fall Brew Review in October out of more than 30 seasonal beers that were blind taste-tested in categories of aroma, appearance, flavor, mouthfeel and overall impression.

Twisted Spike’s initial beer lineup features a Belgian blonde ale, a saison, a quadrupel and its 10th St. Pale Ale, named for the brewery’s location. Sanchez has brewed these beers in one form or another for decades.

His eyes twinkled as he opened the brewery’s back room.

“This is Funky Town,” he said.

Recently, he has grown enamored with the trend toward sour beers, which are intentionally brewed to impart a tart, acidic or sour taste. They take about a year to brew, he said, because “yeast and bacteria work very slowly.”

The success rate is just 30 percent, which contributes to the higher price of many sour beers. Even so, the scientist and beer nerd in Sanchez is eager to create some of his own.

Print headline: Meet the brewer, Opening Twisted Spike Brewing Co. is the realization of a decades-long dream for Bruce Sanchez.