“We do trivia on Wednesday nights and it’s standing room only,” he said. “A few nights, we have to turn them away until someone leaves to make room.” 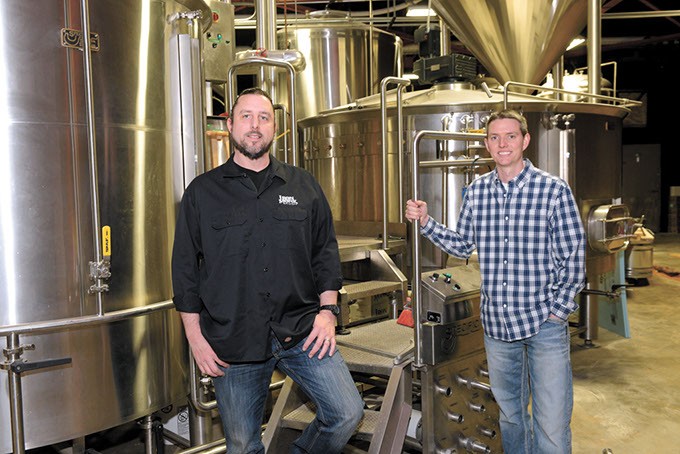 Iron Monk Brewing Company sounds more mysterious than it is. Before you imagine a secret Shaolin temple in Stillwater filled with beer-brewing ninja monks, it might be useful to introduce the company’s founders.

Jerod Millirons earned a master of business administration degree. Dave Monks earned a Ph.D. in molecular biology and plant physiology. They met while teaching at Northern Oklahoma College in Stillwater and found they shared a passion for “big” beers.

Monks was a home brewer in the early ’90s as an undergrad. With Millirons’ business acumen, they decided to make a go of it and opened Iron Monk in 2014.

Now a brewery and taproom, Iron Monk, 519 S. Husband St., in Stillwater is focused on being hyperlocal.

“We’re proud of Stillwater. We’re canning our Exit 174 Rye Pale Ale for the first time tomorrow, and it uses rye that’s grown 45 minutes away,” he said during a recent Oklahoma Gazette interview.

The same goes for the popular Stilly Wheat. The strain of wheat used in the beer was developed at Oklahoma State University and grown up the road in Ames, where it is malted by 46 Grain Company before returning to Stillwater for brewing.

“We’re the first ones to use any of their stuff to make beer,” Millirons said.

“We’re not in a craft-beer town,” he said of the large college community in Stillwater. “A lot of people here grew up on Miller Lite, Bud Light and Coors Light. That’s beer to them.”

So while some craft breweries dive deep into experimental flavors, Iron Monk tempers the brewers’ whims as it introduces tastes and products to new craft beer drinkers.

A dark beer or any mention of hops scares away some customers, he said.

“Stilly Wheat is a good entry-level craft beer,” Hancock said. “We had a Berliner Weisse in our taproom that really went over well.”

Despite being able to serve its higher-point products in its taproom, many Iron Monk drinkers are fond of session-style beers, which have lower alcohol content.

“Our fanbase is just getting into the scene,” he said. “We’re making friendly, approachable beers.”

The 4 percent alcohol by volume Land Run 100 is an IPA created for the annual bike race of the same name. Starting in Stillwater, riders bike over gravel roads to Guthrie and back again.

Iron Monk’s website describes it as “the perfect beer after a grueling 100-mile trek around the backroads of Payne County,” but Hancock said it’s also popular for another reason: pacing.

“They want to have as many as they can have before they’re drunk,” he said.

That has also led Iron Monk’s taproom to become a big hangout spot in Stillwater. While four employees produce the beer, the brewery employs 10 or more bartenders to serve customers.

The change in state laws allowing high-point taproom sales made it a more welcoming place for drinkers, Hancock said.

“We do trivia on Wednesday nights and it’s standing room only,” he said. “A few nights, we have to turn them away until someone leaves to make room.”

Iron Monk is the only brewery in Stillwater, which gives the company an advantage in the market. But because the company isn’t in Oklahoma City or Tulsa, Hancock said it’s harder for fans to find it on tap there.

“At some point, we plan to distribute out of state, but right now, we’re working on saturating all of our Oklahoma markets,” he said.

There are so many excellent breweries in Oklahoma that finding space on liquor store shelves and in bars is getting increasingly competitive.

“We’ve reached a point where drinking local doesn’t have to mean beer brewed in the state, but beer from your town,” Hancock said.

That isn’t to say selling beer is difficult. With a selection of four year-round beers and a rotating seasonal brew, Iron Monk works hard to keep up with demand. Its higher-point Milk Stout with big bursts of chocolate and coffee flavors has become a sought-after beer statewide. The taproom-exclusive Chocolate Habanero Stout also draws fans back for more of its sweet burn.

“Our lineup is really unique,” Millirons said, and it helps them win over a lot of new craft beer fans. “I can safely say 2017 is going to be our biggest year yet. We just got a new canning line and we’re bringing in more brewing equipment.”

That could mean more beers on the way.

“We’re not worried about brewing a certain style,” he said. “We just make what we like and what our fans like.”