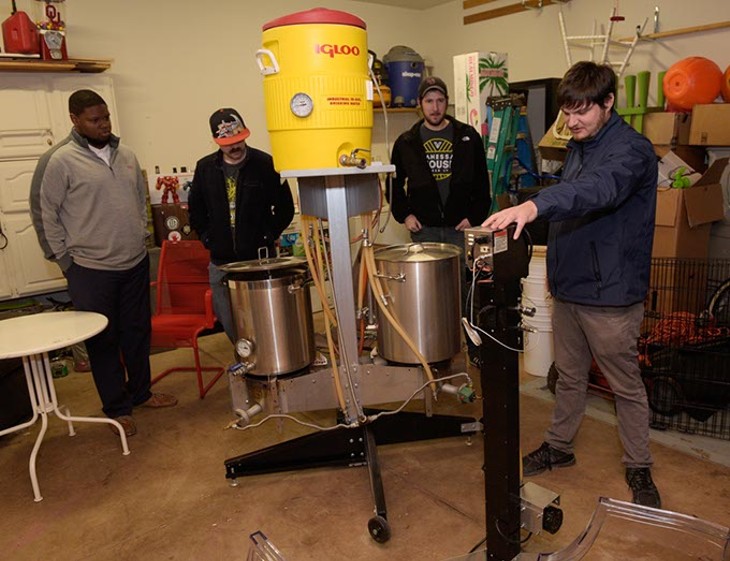 Opinions vary regarding the condition of the Vanessa Drive home in Norman where the group behind Vanessa House Beer Co. met its most recent member.

“It was spotless!” Wright argued playfully. “It was that house you want to run away to when you were a kid. It was just a big clubhouse.”

The group imbibed plenty of beer there, but it wouldn’t inspire the company’s name until years later.

“This is kind of how we came up with the name — drinking beer, reminiscing,” Carrales said.

After college, the quintet stuck together.

“Zac would have us over to cook out or drink beer,” White said. “Then, one day, it was, ‘Let’s start brewing beer.’”

The crew began home-brewing in 2011 with varying degrees of success.

Early attempts — and failures — included adding Lucky Charms to the wort, trying to make a spicy Doritos-flavored beer and creating a lemon-lime beer they all agreed was the worst. Even so, beermaking soon became their main focus, and they created something almost every weekend.

“We would spend all the money and brew all the beer,” Carrales said. “We ended up brewing more beer than we could drink.”

When they decided to bottle it for later, they discovered it was the least-enjoyable part of the process.

“Bottling sucks,” White said. “It was an all-fucking-day event. It was cold as shit. None of us wanted to put our hands in the bucket to get the bottles out, so we’d take turns.”

But tasty beer was a salve for their wounds, because 150 bottles later, they had plenty to drink while talking about college.

It’s almost jarring how quickly the group shifts from making fun of each other to talking about running a beer company.

Carrales, who handles Vanessa House sales and marketing, said they want to brew the beer in Oklahoma once they’re better established.

Instead, they went to O’Fallon for contract brewing, using the larger brewery’s equipment and staff to make the beer using Vanessa House’s recipe.

“It’s super expensive to have a brewery, especially if you own all the equipment,” Carrales said. “The good news is direct sales drastically lowers the amount we have to invest in the new place. Under the old laws, it used to be $1 million minimum to brew and package your own product.”

The minimum order for contract brewing at O’Fallon is 50 barrels, which Vanessa House split into 320 cases and 96 quarter kegs.

“That was very ambitious, to say the least. Most people didn’t think we could do it, so we got out there and sold it like a son of a bitch,” Carrales said. “As of last week, I think one wholesaler had some kegs left.”

Evan is the group’s brewmaster, though everyone helps create and test beers. Recipe creation still happens in Zac’s garage, which is how Vanessa House’s next beer was named.

The Fifth Keg Imperial Malt Brown is one of Evan’s first recipes that they all loved. During brewing, they created five kegs but lost one of them.

“It smelled so good,” White said. “We think Zac was drunk and cleaning out the brewhouse and maybe poured out five gallons of beer.”

It’s a different style than 401 K Cream Ale, which is designed to be a flavorful, but very drinkable beer. The Fifth Keg appeals more to “beer nerds,” Carrales said. The brown includes lactose and candy sugar with a complex sweetness and about 8 percent alcohol by volume.

“It has a lot more going on flavorwise,” Evan Smith said.

The Fifth Keg is scheduled for a February release. Meanwhile, 401 K Cream Ale has been a hit and sold out its initial 50-barrel run so quickly that Wright was yelled at by the liquor store owner near his home for not bringing more beer for her shelves.

It’s another story for the quintet’s endless anecdotes, like the time Wright and Evan nearly set the garage on fire when they first used their large brewing kettles.

“It engulfed the kettle and almost the ceiling,” Wright said. “I remember the smell of shame and burnt hair.”

Like the company itself, the mishaps and triumphs of Vanessa House’s owners just inspire them to create another batch of beer.

Print headline: Meet the brewer, After five friends brewed more beer than they could drink, they decided to create Vanessa House Beer Co.