“She’s cutting-edge,” Gard said of Callahan. “She represents an evolution in the craft." 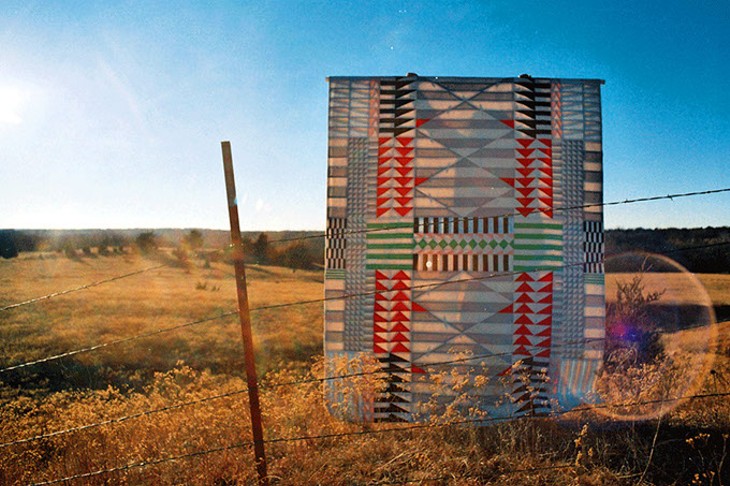 Quilts are objects of multiple functions. They capture warmth, serve as decorations and tell stories. The quilter comforts people and wraps them in a story. Famed architect Frank Lloyd Wright said form should not follow function but should be one in a spiritual union, an adept description of a quilt.

The popularity of quilting among millennial women is rising, and no one personifies this more than 20-something Edmond native Meg Callahan. She is now a small business owner whose quilting designs, a modern take on classic ideas, have caught the attention of admirers near and far.

“Quilting is a very time-honored tradition,” Callahan said. “It’s taking small pieces of fabric and reattaching in a pattern. I like to research specific designs and make a twist based on the process.”

Callahan’s parents helped plant the seed of her artistry at a young age. She grew up in a household encouraging her to create and experiment, often by designing clothing. Influenced by her mother, an architect and painter, and by the practicality of her father, an attorney, she loves projects that represent art and utility.

After high school, she attended Rhode Island School of Design with an initial interest not in quilting but in furniture design.

“I really like the mathematical aspect of furniture artistry,” she said. “Then I tried quilting mainly as an experiment and fell in love with it.”

From that point in 2011, quilting became her calling.

She has since started her own quilt design business, M. Callahan Studio, and recently moved back to Oklahoma. Much of her work is influenced by her home state.

“While in Rhode Island, my appreciation for Oklahoma went up times ten,” Callahan said. “The epic sky and stormy weather, I use that for inspiration for my work.”

All quilts produced by Callahan are made to order. She often collaborates with customers and works with any request. Pre-designed and pre-sewn quilts are also available and priced lower. To help with the orders, Callahan works with local long-arm quilter Sandy Garn for final stitching.

“She’s cutting-edge,” Gard said of Callahan. “She represents an evolution in the craft. Being a graphic designer, she’s able to take a design, create it using a computer and take that to fabric. That’s new in the world of quilting.”

Her designs have also caught the eye of the press. Mentions of her work have found their way into The New York Times, The Wall Street Journal and Metropolis. Last year, Garden & Gun, a publication concentrating on southern American sporting culture, food, music, art and people, named her a victor in the Best of the South Awards.

Callahan took top prize in the home category. She credits Oklahoma and its people for the award, her inspiration and her state of mind.

“I don’t think the award is as much about me as much the community and the environment that I come from,” she said. “I love Oklahoma.”

Print headline: Functional fashion, Quilting is making a comeback as an American pastime.