Megan Mullally has had a busy year. In the spring, she recorded a new album, Nancy & Beth, with friend and actress Stephanie Hunt. This summer, she and her husband, actor Nick Offerman, traveled the country with their Summer of 69: No Apostrophe comedy tour, and just before the election, she participated in an impromptu Will & Grace reunion.

Now, the Oklahoma City native hits the big screen with her new film, Why Him?, which premiered nationwide in theaters last week.

“There are a lot of really big laughs in this movie,” Mullally told Oklahoma Gazette during a recent phone interview from her Los Angeles home. “Right now, we have a lot of stress in this country, and I think we all need a laugh. This is the perfect opportunity.”

The 20th Century Fox production stars Mullally (as Barb Fleming), Bryan Cranston (as her husband Ned Fleming) and James Franco (as Laird Mayhew) in three of the film’s lead roles.

“It’s about a Midwestern family, the Flemings, who have a daughter who goes to Stanford, and they find out in a very unexpected way that she is romantically involved with this guy, a character played by James Franco,” Mullally said. “He is definitely not the kind of guy they expect their lovely little Midwestern daughter to be dating.”

The family travels to Silicon Valley to meet him for Christmas and discovers he’s a young billionaire who made his fortune in the gaming industry.

“Barb isn’t quite as conservative as her husband, but it’s close,” Mullally said. “It’s just a real eye-opener for both of us when we realize who our daughter is dating.”

The film was shot in and around Los Angeles earlier this year from January through March.

“That was really amazing because a lot of things shoot elsewhere these days because of tax incentives,” Mullally said. “We shot on location in LA and some of it on the Fox lot and some on the Universal backlot. So it was nice to be able to shoot a movie and stay at home.”

Why Him? is not necessarily a movie about Christmas, she said; it just happens to be set during the holiday. And she warned audiences to prepare to laugh.

“I think it’s a movie people will really enjoy. They’ve been testing it, and it tops out at 95 percent, which is unheard of,” she said. “The script was great, but we also did a lot of improvisation. That’s sort of the nature of comedy these days. And we cracked each other up; we laughed so much every day. It was such a fun movie to shoot.”

Mullally said she plans to come home to Oklahoma City for the Christmas holidays. She will spend some time with her 94-year-old mother, who still lives in the same Nichols Hills home she grew up in.

“While I’m home, I plan to sneak into one of the theaters there in Oklahoma City and see the film,” Mullally said. “I also want to try to get my mom out to see it. It’s just a great kind of odd couple classic comedy.”

Why Him? is a family comedy that is rated R.

“And these days, you can’t be conservative; you have to keep pushing the envelope or it’s not going to work,” she explained. “I think everyone is really going to enjoy it.”

Pushing envelopes is something Mullally did for eight seasons on the long-running NBC sitcom Will & Grace. This fall, she surprised audiences when she reprised her role as Karen Walker in a short reunion.

“It was so surreal to be back on that set,” Mullally said. “We have been off the air for 10 years, but [we] slipped back into those characters [like] it was like no time had passed at all.”

“All I can say is that there’s a very good chance you will be seeing us again,” she said. “But beyond that, I can’t really say anything else.”

Mullally’s fans can also expect new music. Her forthcoming eponymous album with Hunt, Nancy & Beth hits stores April 7. A few years ago, Mullally met actress Hunt while they filmed a movie together, and the two decided to form a band. They toured across the United States, including a February 2014 stop at Oklahoma City’s Lyric on the Plaza.

“Stephanie and I are so excited about this new record; it’s really cool,” Mullally said. “It’s on vinyl, and even just the record art itself is really, really amazing. I love it. It’s something that was my concept and my design, and I’m so excited about it. There’s a surprise element to it that I won’t go into because I don’t want to spoil it.”

“We are also going to have to book something in Oklahoma City at some point,” she added. “It’s always so great to come home.” 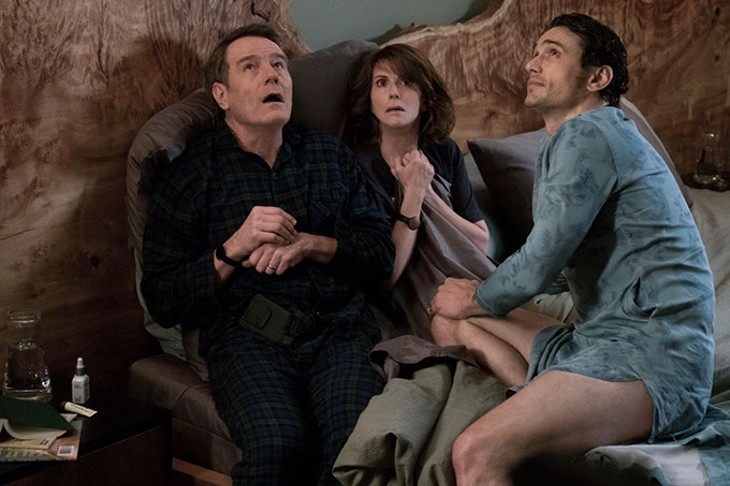