Hummus Mediterranean Cafe’s eponymous dish lives up to its top billing at its new second location.

What works: The hummus is smooth and flavorful, and the rice is the star of the platter.
What needs work: The steak is slightly overcooked.
Tip:Try the muhammara.

Using a menu item in the name of a restaurant is either an act of extreme hubris or a good marketing decision, depending on whether or not it delivers a memorable quality product.

Hummus Mediterranean Cafe opened its first location in Moore in 2012, and co-owner Ash Abuesheh heard from enough costumers that they were driving down from Edmond and north Oklahoma City to open a new location.

In August 2018, the second Hummus Cafe, 3000 W. Memorial Road, Suite 101, opened in the shopping center at the corner of Memorial Road and May Avenue.

“We tested the market on the north side, found huge potential and decided to go to a second location,” Abuesheh said. “The Memorial Road [location] is now famous for having so many restaurants. Our reputation in Moore has our [new] location. We have increased sales after opening the second location.”

Hummus Cafe serves the recipes that Abuesheh learned from his mother and grandmother that hail from Jordan. It includes some different offerings not found at other Mediterranean restaurants in the metro, including muhammara, which is a dip made of roasted red bell pepper and walnuts. It also serves manakeesh flatbreads that are baked with spices like za’atar or covered in cheese, either mozzarella or salty akwal.

“All of our recipes are authentic, and nothing comes premade,” Abuesheh said. “Everything is fresh, and we use high-quality meat. For instance, we use Angus beef for our ground beef (kofta) and filet.”

The décor inside Hummus Cafe is relaxed; it’s the kind of place you would go on a night you have a craving or don’t feel like cooking. There is a patio for outdoor eating and big windows for natural light. I dined at noon on a Monday, and there were only two other occupied tables. 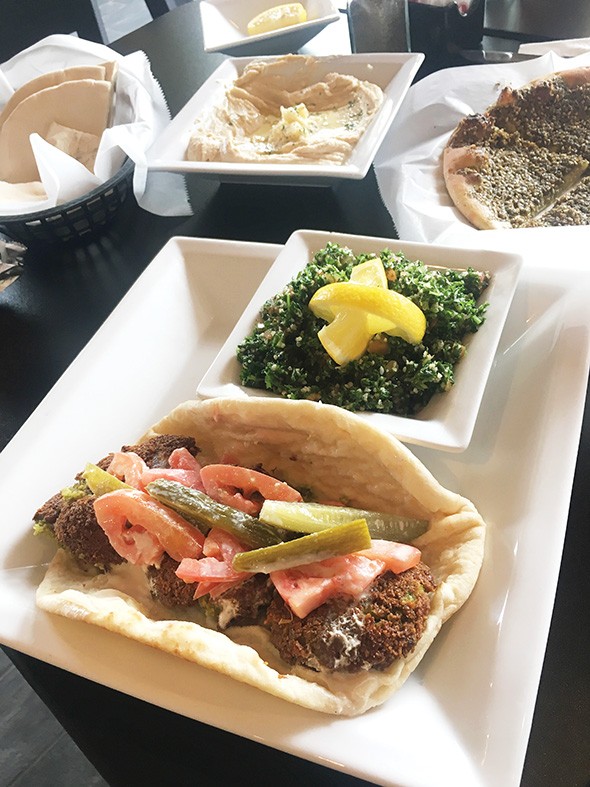 The server was attentive, and I ordered one of the restaurant’s eponymous dishes, which is one of eight hummus varieties on the menu. A plain blend of chickpeas, tahini and lemon are offered, also including jalapeño, paprika, pine nuts, ground beef, gyro and chicken-topped hummus varieties in addition to the garlic version that I ordered ($6).

The portion arrives topped with a healthy amount of olive oil and a huge dollop of garlic in the center of the hummus and comes with plenty of fresh pita bread based on-site.

The texture of the hummus was smooth and had the right balance between the nutty flavor of tahini and bright acidity of lemon. The extra olive oil prevented the hummus from solidifying like a block when I put the leftovers in my refrigerator overnight. Hummus Mediterranean also does not skimp on the fresh garlic, which is full of bite in its raw form. The pita made in-house is a nice touch and a huge upgrade from the stuff you get in the store.

I ordered a za’atar pie, which is listed on the menu as a pita pie, but the manakeesh on which it is served is much thicker than pita. The spice blend is baked into the flatbread, and the crunch from the sesame seeds provided a nice texture contrast, but the next time I order the dish, I think I’d opt for the akwal cheese. The za’atar blend is found throughout the menu at Hummus Cafe, and it’s one of my favorites because it’s an herbaceous blend of thyme, oregano, sesame and sumac. Abuesheh said that they add sumac at the end for a little additional kick. 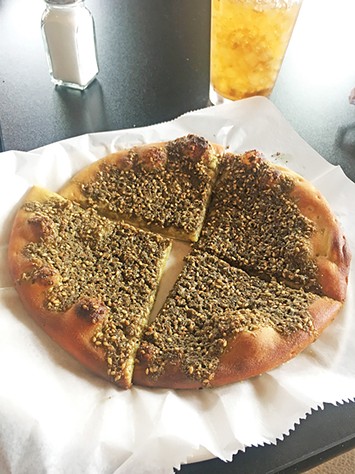 Hummus Cafe’s falafel is served in large patties that are fried crispy on the outside, and the chickpea mixture is tender on the interior with plenty of herbs. You can order it in a basket of five or as a sandwich with pickles, tomato and tahini. I went into the meal thinking of ordering falafel as a plate, with rice and vegetables, but it’s not on the menu. Perhaps I’m the only one who wants that combination.

“We make the falafel from scratch, which is a long process just to make one piece,” Abuesheh said. “It’s hard to eat with rice because it’s going to be dry, to be honest. With my restaurant experience, no one orders falafel with rice.”

Instead, I ordered the sandwich, which is packed with four huge patties. I took one off the bread and dipped the remaining falafel in hummus because I really like chickpeas or maybe it’s my body’s way of telling me to eat more protein. My Americanized palate likes a mint and yoghurt sauce with the falafel; I like the tahini sauce, but it’s kind of bitter.

“That’s how it’s served in Jordan and across the Middle East,” Abuesheh said of the tahini sauce and falafel combination. “You’re not the only one who feels that way [in the U.S.]”

I continued the meal by trying its lunch portion of the beef kebab plate, which is served with grilled tomatoes and onion, vermicelli rice and a choice of hummus, muhummara, baba ghannouj or Greek salad.

I forgot to specify how I wanted the beef cooked, so it arrived on the well-done side, but the marinade is very tasty, and the dressing on the Greek salad is good enough to be bottled and sold. The star of the plate is the vermicelli rice, in which Abuesheh takes great pride.

“Our rice is the signature,” he said. “We add five spices, but we mix it in there so that you won’t see them, but you’ll taste them.”

I’m interested to see how the sit-down Hummus Cafe will do in contrast to fast-casual, counter-service concepts like Baba G.’s and Shawarma & Co. nearby. The service at Hummus was fine, but it also wasn’t very busy. It offers some things you can’t find elsewhere, and I would eat there again just for its rice alone.  The hummus certainly lives up to its billing.