Last Podcast on the Left will perform a live show at Rose State College Nov. 9. 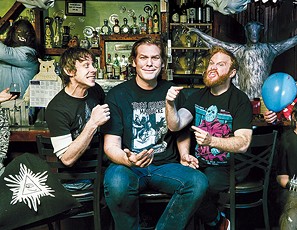 A conversation with podcaster and comedian Ben Kissel can veer with ease from talk of serial killer Jeffrey Dahmer to the Jonestown cult massacre and then to the study of cryptids and aliens.

These are just a few of the topics explored on Last Podcast on the Left, the podcast Kissel has hosted with fellow performers Marcus Parks and Henry Zebrowski since 2011. They have an upcoming live show 8 p.m. Nov. 9 at Rose State College’s Hudiburg Chevrolet Center, 6000 Trosper Place.

One of today’s most popular comedy podcasts, Last Podcast on the Left has huge numbers of dedicated fans, and it can usually be found around the top of several podcast charts, garnering over 1 million downloads per week.

Kissel, Parks and Zebrowski approach their gruesome discussions with irreverence and humor. Sometimes the gags are borderline inappropriate and maybe not to everyone’s tastes. But their jokes rest upon a framework of thorough research, another element for which they’ve become well known.

The podcast has been running strong for over 330 episodes. Although it was conceived as a show about horror movies, the three soon realized they all loved true crime, too.

For Kissel, who grew up in Wisconsin, Dahmer loomed large in his childhood and gave him his first introduction to true crime as a cultural phenomenon. Later, he and Parks started Last Podcast on the Left and recorded two episodes about film before Zebrowski turned the talk to serial killers in episode three.

“Henry came on, and he never left,” Kissel said.

Despite the sudden change of gears, they found the switch to true crime and the supernatural was easy and happened organically. They realized that aliens, ghosts and serial killers strangely fall under the same morbid umbrella.

They started out covering multiple stories each week but soon became hyper-focused, dedicating full episodes to single subjects and learning how best to cater to their audience.

In this way, they built what Kissel called their “little coalition of fans” and saw their listenership skyrocket. Now they’re able to podcast full-time, and together, they own Last Podcast Network, which hosts diverse podcast programming.

“Really, as an artist, it’s kind of a dream come true not to have to go to a day job and make money off of your art,” Kissel said. “I’d say it’s a miracle in many, many ways. We just feel really fortunate.”

The three co-hosts have gained particular respect for their extensive research into the show’s topics. Every week, Parks does roughly 40 hours of research for each new episode, sometimes reading multiple books for background information.

Often, they will break down their bigger stories into several parts to cover them comprehensively.

For example, they examined Timothy McVeigh and the Alfred P. Murrah Federal Building bombing in Oklahoma City in a four-part series last year. The episodes covered the gradual radicalization of McVeigh, the day of the attack itself and the subsequent investigation.

The dynamic of the podcast usually consists of Parks’ detailed storytelling, Kissel’s insightful commentary and Zebrowski’s bursts of manic humor. Kissel explained that Parks outlines each episode with a 10- to 15-page script, which acts as a foundation and gives their discussion focus.

“That allows Henry and I to jump off,” Kissel said. “Henry can do his characters. I can do my straight-man reactions, maybe have a zinger here or there, come in with a one-liner or a story or something. And we always have that script to go back to.”

The comedy is entirely improvised. Kissel can utilize his 10 years of standup experience, while Zebrowski’s background as a character actor lends him an uncanny ability to slip in and out of wacky personalities.

There is an obvious risk when comedians are trying to joke about murderers and dark subjects on the fly, but Kissel said they are aware of that danger and try to walk a fine line.

“We never try to make fun of any of the victims,” he said. “We always try to maintain our heart. We’re not sitting here laughing at any of the people that have suffered at the hands of these monsters. The only people that we laugh at are the monsters, and I do think that takes a certain power away from them.”

Interest in true crime and the supernatural has exploded in recent years, or at least become more mainstream. Kissel said he believes there has always been a morbid curiosity about killers, but it might also be because listeners need the escape.

“It’s kind of a darker time,” he said. “And I don’t know if this is accurate or not, but I feel like for a lot of people, they feel like we’re in a dystopian timeline right now.”

He also acknowledged that a goal of the show is to humanize and “defang the monsters,” reducing criminals to their very human faults, a tactic that has also helped gain them loyal listeners.

“BTK is not this unbelievable man of power,” Kissel said, referring to serial killer Dennis Rader by his well-known nickname. “He’s just a little, dog-catching ass. He’s just a little prick. He’s a bad poet is what he is.”

(For those unfamiliar, Rader worked as a dogcatcher in Wichita, Kansas, and also wrote poems about his own crimes.)

Kissel said he’s happy the podcast has allowed him to travel with his best friends and commune with their fans. He added that they often receive messages from listeners who use the podcast to get through stressful periods.

The group toured extensively last year. This year, they have fewer dates but are filming a special at their Chicago show in December. Otherwise, they won’t record or post their live shows.

Kissel hinted that the Oklahoma City performance will feature several topics, including cryptids, a professional wrestling segment from Kissel, a true crime story from Parks and a discussion on extraterrestrials from Zebrowski.

Last Podcast on the Left