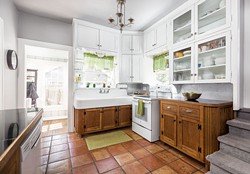 In today’s hurried-up world, the slower pace of a Currier and Ives Christmas seems ideal. Friends gather for cups of mulled cider, carolers sing of the season and a cozy, crackling fire welcomes weary travelers.

“This is the largest fundraiser for our neighborhood,” said Sarah Jordan, tour chairwoman. “Last year, we had roughly 2,000 visitors.”

Additionally, the event shows off the community’s value, historic preservation efforts and joys of urban living.

“Visitors will see a variety of homes, including various interior styles and five different architectural styles,” Jordan said. “Each one brings something different to the table. Some are newly renovated, modern and fresh while others showcase a more historic charm.”

Mild fall weather in October and early November allowed residents to get a head start on decorating.

The neighborhood dates back to before statehood. It was named for former resident Perle Skirvin Mesta, who was the U.S. Ambassador to Luxembourg from 1949 to 1953 and often held lavish parties, which earned her the nickname of “hostess with the mostest.” In 1949, she was named Time magazine’s Woman of the Year.

Tickets are available at mestapark.org and several metro brick-and-mortar stores and will be sold at the door.

“We are looking forward to seeing our friends and neighbors from throughout the metro,” Jordan said.

Refreshments will be provided at the home of Jennifer and Andy Bowman at 704 NW 18th St. Food trucks also will be located there.

She said carolers will circle the neighborhood and Santa Claus will stop by.

Mesta Park is listed on the National Register of Historic Places and designated a Historic Preservation District by the City of Oklahoma City. It is bordered on the west and east by Western and Walker avenues and spans from NW 16th to NW 22nd streets.

“Mesta Park is an eclectic but tight-knit community,” Jordan said. “We are truly fortunate to live here and hope others can see the neighborhood through our eyes on the home tour.”