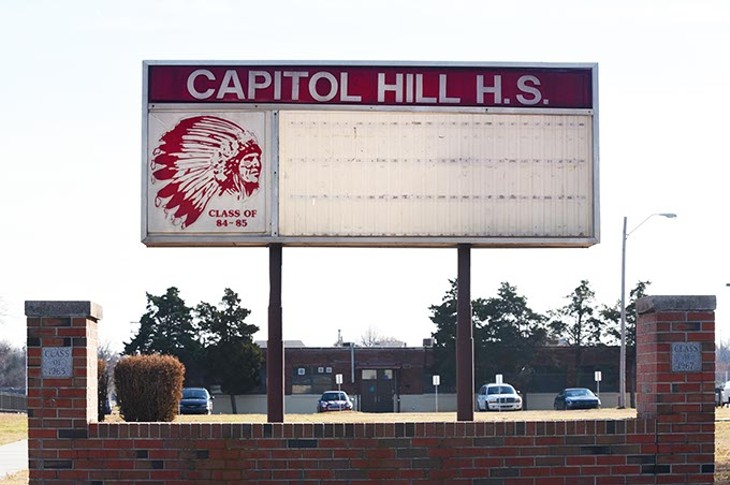 Capitol Hill High School is in search of a new mascot.

The Oklahoma City School Board voted 8-0 to dismiss the Redskins mascot after hearing from several students and community members who said the name was offensive to Native Americans.

Board chair Lynne Hardin said she was among many who grew up in OKC without viewing the name as offensive.

“But once you know, you can’t go back,” Hardin said.

Four Native American students told the board during last week’s meeting they were in favor of changing the name, and over half of the standing-room-only crowd stood in support of the students after they spoke. The OKC school district’s student population is 4 percent Native American.

J. Don Harris, president of the Capitol Hill Hall of Fame and alumni association, told the board the mascot was never meant to be offensive and had tradition going back to 1927. After the board vote, Harris said he was alright with the change.

“We never wanted to offend anybody,” Harris said. “Back in the day, everything down there was named Redskin Clinic or Redskin Barber Shop.”

Hardin said he was in favor of finding another name that paid tribute to Native Americans. The board said it would create a committee to select a new mascot.

OKC school board member Gloria Torres will get a full term after two challengers for her seat withdrew last week.

Former District 6 school board member Jay Means and William Lee Molden had filed for the Feb. 10 race last week but later withdrew, according to the Oklahoma County Election Board.

Torres, who was appointed to the board this year following Means’ resignation, is the district’s first Latina board member and the only current Hispanic member of the board.

District 6 includes large portions of the city’s Hispanic community on the southside, and the school district’s student population is nearly half Hispanic.

Means resigned from the OKC school board in June, saying he wanted to focus more on his position as principal of a middle school in Woodward. However, last month, Means resigned as principal and there was talk that Means was interested in running again on a platform of being anti-illegal immigration.

Means was unable to be reached for comment on his withdrawal from the race, but he told The Oklahoman last week he would consider the other candidate’s stance on illegal immigration before deciding to stay in the race.

“The current hours are simply limiting,” Parks and Recreation Director Doug Kupper said. “The new hours will provide increased access to the park while also protecting the needs of this sensitive area.”

The total cost to administer drug screenings and tests over the past two years is $501,086.

However, with the average adult payment being $51 a month, it would have cost the state $133,212 to give welfare assistance to those individuals, rather than administer tests.

Supporters of the law say testing might prevent some drug user from applying and the program does reduce taxpayer funds going to drug users.

However, the total number of residents to fail a drug test is 270, or 10 percent of those who are tested.

“My office named this train, and we are feeling kind of like parents sending their child out into the world,” said state Rep. Richard Morrissette, D-OKC, who authored legislation that helped bring about the Eastern Flyer rail line, passenger rail service that will connect OKC with Tulsa starting in February. “The popular success of this effort is entirely in the hands of Oklahomans. Without ridership, we will not succeed.”

Look in next week’s Oklahoma Gazette for a story on the efforts to bring passenger rail to Oklahoma and what makes the new Eastern Flyer a unique project.

Visit okgazette.com to listen to last week’s episode of the Capital City podcast. James Roller of the Oklahoma Independent Petroleum Association and Whitney Pearson of the Sierra Club were guests who discussed the recent New York Times article on Attorney General Scott Pruitt’s relationship with the energy sector.

Click on the Capital City Blog link to find all archived episodes.