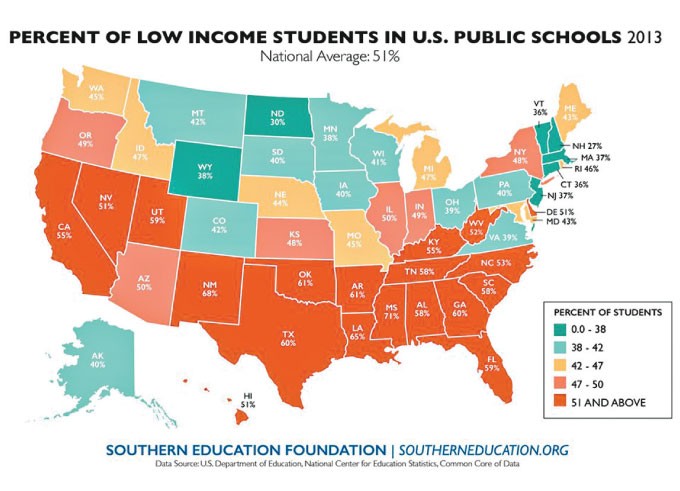 Oklahoma has the fourth-highest student poverty rate in the nation

For the majority of Oklahoma children, paying attention in class competes with thoughts about their next meal, faded clothes or whether a parent will be at home after school.

That’s because the majority of Oklahoma children in public schools lack economic stability. In fact, the state’s 61 percent student poverty rate — based on students who qualify for free or reduced lunch — is the fourth highest in the nation.

“You think a kid who is hungry is really thinking about [increasing] that GPA so they can make it to college?” said Kent Smith, president of Langston University. “It doesn’t work that way.”

One of the biggest challenges to education in Oklahoma is the fact that most kids come from poor homes, and that’s not a problem easily addressed within the education establishment.

“Without improving the educational support that the nation provides its low-income students — students with the largest needs and usually with the least support — the trends of the last decade will be prologue for a nation not at risk, but a nation in decline,” said SEF Vice President Steve Suitts in a statement about the report.

Poverty is a challenge for schools primarily because it means a great teacher and a great school might not be enough to help a student from a not-so-great economic or home environment.

In Oklahoma City Public Schools, 90 percent of students are eligible for free or reduced lunches. While the district offers some programs for all students — like free meals — the high poverty rate demonstrates a need for solutions that go beyond classrooms.

Oklahoma’s high rate can be easy to overlook when glancing at other state economic data. An unemployment rate below 5 percent, a payroll growth rate more than double the national average and a booming energy industry provide the state with the kind of statistics chambers love. But these numbers don’t tell the whole story, and the city and statewide student statistics show a generation in poverty.

“Most people will talk about how great our low unemployment rate is in Oklahoma, but what most people don’t talk about is how many people are underemployed,” said Smith, who discussed education in Oklahoma as the keynote speaker at Dialogue Institute of Oklahoma’s luncheon last week. “Unfortunately, we are one of the worst performing states educationally in the United States of America.”

“This is something that should involve all of us,” he said. “I don’t believe we understand how dire the straits really are, and I certainly don’t think we do a good job of helping [citizens] understand the data.”

“I bet we can fix that,” Ward 4 Councilman Pete White told school officials in a meeting last week about city a requirement that school construction projects include safe rooms.

White, who represented the city at a joint education task force meeting with the school district, and Ward 8 Councilman Pat Ryan said they considered lifting the mandate to free up money for other projects, such as expanding southside facilities to help alleviate overcrowding.

The school district is building new gyms at 46 schools with funds from the 2007 bond. Twenty-one gyms were completed before last year’s storm shelter ordinance was passed. With 25 gyms left to build, district officials said it would cost over $1 million extra per gym to meet the safe room mandate.

However, even if it got permission from the city, the district might not choose to change its plans.

Another district official also said making changes to planned gyms would be difficult because many schools expect to have safe rooms in their new gymnasiums.

“[This station] lets the commuters and the cyclists that use Elemental as a hub to not only work on their bikes, but if you forget your pump at home, you will be able to check the pressure in your tires and put air in your tires,” said Chad Hodges, team manager of DNA Racing.

The racing team donated the station and installed it last week. The city also announced that bike repair stations in the Plaza District and Deep Deuce will be installed in coming months. 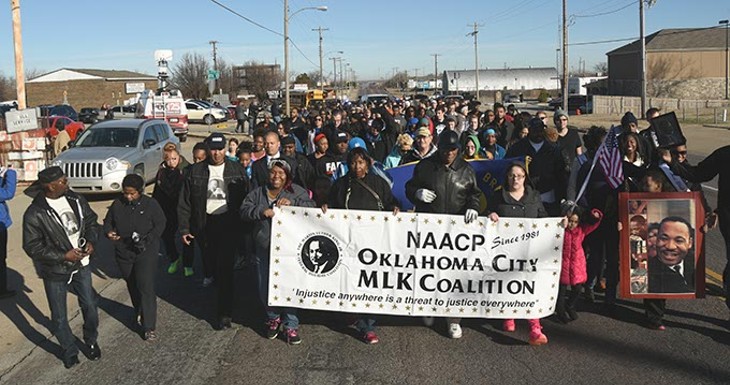 “I think it’s important for them to see about what Martin Luther King Jr. means and what he did for us. To let them know if it wasn’t for him, we wouldn’t be where we are today.”

Those were the words of Angela Billings, a teacher at the Playground Academy on NE 23rd St., as she brought her class out to the curb to watch a silent march last week on Martin Luther King Jr. Day.

A few hundred marched their way to the Oklahoma capitol, honoring the work of the civil rights movement and the legacy of King, who was assassinated in 1968.