A bill that would have added sexual orientation and gender identity to the state’s workplace discrimination law will not receive a hearing in committee this year.

A bill that would have added sexual orientation and gender identity to the state’s workplace discrimination law will not receive a hearing in committee this year.

Freshman representative Jason Dunnington, who introduced House Bill 1345, announced last week the bill would not be heard in committee, which effectively stops the bill from moving forward for at least another year.

“Many of my colleagues in the House would contend that America is built on the fundamental promise that if you work hard and play by the rules, you can get ahead,” Dunnington, D-OKC, said. “But today, thousands of Oklahomans go to work fearing that they could lose their jobs simply because of who they are or who they love.”

Oklahoma employers may legally choose to not hire or to fire individuals because of their sexual orientation, which is what HB 1345 attempted to prevent.

“The LGBT community has found a strong ally in Jason Dunnington,”

Troy Stevenson, executive director of Freedom Oklahoma, said in a statement. “Freedom Oklahoma would like to thank the Representative for proposing the most comprehensive protections against discrimination in the history of Oklahoma. While it is extremely unfortunate that HB 1345 will not be heard in this session, we look forward to working with Rep. Dunnington — and other fair-minded lawmakers — to ensure that one day soon, freedom will truly mean freedom for everyone in our great state.”

The city’s new director of animal shelter and animal welfare operations brings over 30 years of experience with her.

“I am excited about becoming part of a progressive movement that includes caring government officials, staff, volunteers and community partners, all working together to make a difference,” Julie Bank said last month after her hire. “The City’s Animal Welfare program is well on its way to achieving its goals, and I look forward to leading the team to make those goals a reality.”

Bank has animal and nonprofit experience at the national and local level in New York, California and Arizona. “We did an extensive search and are excited to bring someone to our city who can continue to move us towards a safer, healthier and more humane community for pets and people,” said Bob Tener, the city’s development services director.

One of the Animal Welfare Division’s primary roles is pet adoptions. Oklahoma City Animal Shelter is located at SE 29th Street and S. Bryant Avenue and is open for adoptions or reclaiming lost pets from noon to 5:45 p.m. every day except holidays.

Adoptable pets are vaccinated, sterilized and treated for worms. For more information, visit okc.gov/animalwelfare or call 297-3100. 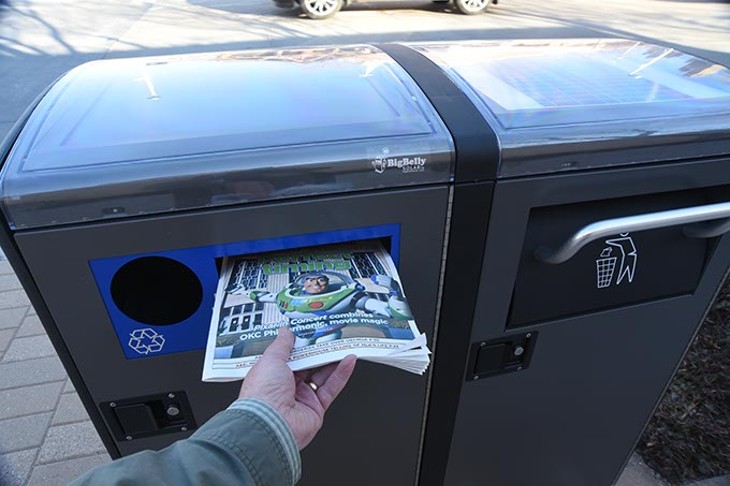 Each new Big Belly has one opening for trash, and its solar-powered compactor allows it to hold up to five times as much as a trashcan of similar size, according to the city. The Big Belly’s other opening is for recycling paper, plastic, aluminum and glass.

“If we can just blur those lines between community and civic engagement, that will make a difference,” said Shane Hampton, a volunteer with Better Block OKC and its Love Your City event, earlier this month.

Held on Valentine’s Day, Love Your City set up a listing of over 80 OKC boards and commissions, along with other information on getting involved in city government.

Some councilors and city officials dropped by to show support for the event that was especially geared toward a younger generation of OKC residents who havebecome engaged in community development and events but not as much with civic and local government matters.

50. That’s how many Oklahoma City Public School district employees have enrolled for Spanish classes this year. The group includes principals, teachers, nurses and counselors, according to the district. The district’s student population is 50 percent Hispanic.