Oklahoma City school district officials have their sights set on improving reading performance, as half of all third-graders failed to score proficient on the end-of-year test.

The percentage of proficient third-grade students has actually dropped from 59 percent in 2010 to 51 percent last year, although that is based on end-of-year tests that have varied over the years.

“We’ve just got a lot of work to do in elementary reading,” said Aurora Lora, associate superintendent of student achievement for the Oklahoma City Public School District.

Lora, who was hired this year by new superintendent Robert Neu, said she has found a school district that lacked any uniform approach to reading curriculum.

In addition to spending at least 90 minutes a day on reading instruction, Lora said students struggling with reading comprehension will receive an additional 30 minutes to an a hour a day. Literacy team members also have been meeting with school principals to review data and discuss reading techniques based on successful models.

Lora said mandates that come from the central office work because they put everyone on the same page.

“We heard there was some pushback from some schools [last year] to do 90 minutes of reading,” Lora said. “We have made it mandatory.” 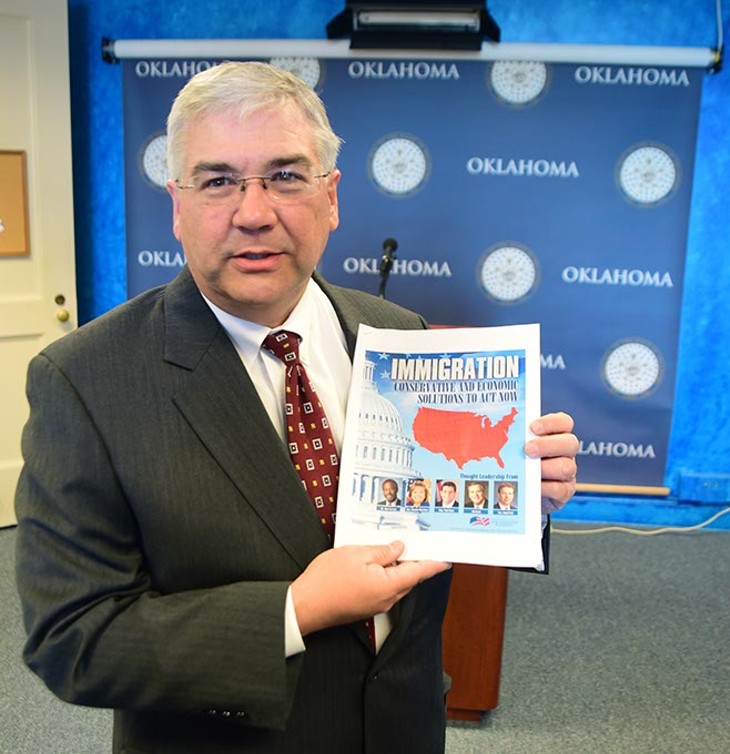 That number has likely grown over the past few years, and a Republican state lawmaker is urging the federal government to take action on immigration reform.

“Don’t hold anyone back who wanted something better for his family and the only way he could do it was to come here illegally,” said Sen. Brian Crain, a Republican from Tulsa. “Don’t hold that against him. Make him start at the back of the line, but give him a line where he could become a citizen.”

Crain spoke at a press conference last week calling for Oklahoma’s federal delegation to work toward immigration reform that provides a better process for citizenship and allows many undocumented citizens access to work.

Crain was the only state legislator to speak at the press conference, but he was joined by Pat McFerron of CMA Strategies and Jake Fisher, owner of Bridges Advertising, both Republicans. Many Republican leaders across the nation and other business owners from OKC spoke out in favor of reform.

Immigration reform has been a divisive issue for many years and continues to be so following President Barack Obama’s announcement last week of executive action to allow millions of undocumented immigrants to remain in the country. Republican leadership in the House and the newly elected Senate has said such action by Obama could hurt the chance of any meaningful immigration reform in the coming year. Leaders from Oklahoma have also criticized Obama’s potential use of executive action.

“Executive amnesty is not the answer,” Sen. Jim Inhofe said two days before Obama’s action. “It’s being reported that if President Obama goes around Congress and uses executive action to enact his immigration reform, roughly 5 million illegal immigrants would get amnesty, receive work authorization, social security numbers and government-issued IDs. This is not going to make our borders more secure but instead only entice others to avert our nation’s immigration laws.”

Mindful of complaints that Project 180 and other downtown construction projects have stirred over the past few years, members of the streetcar subcommittee say they want to learn from those mistakes.

“I think [Project 180] really emphasizes to us how vital it is that we do outreach to businesses and merchants,” said Mark Gibbs, a member of the Oklahoma City streetcar subcommittee. “It is important that we use smart techniques as I have seen in other cities. Portland only did a few blocks [of streetcar construction] at a time.”

Oklahoma City has pumped over $175 million into transforming numerous downtown streets into more bike- and pedestrian-friendly routes. However, Jane Jenkins, director of Downtown OKC, Inc, said construction often caused headaches for many merchants, workers and residents who felt there was a lack of adequate communication about traffic.

“Will they be better efforts than Project 180?” asked Jenkins, referring to construction with the streetcar line.

Committee member Stephen Mason said he has seen other cities work well with the community when constructing a streetcar line.

“Salt Lake City actually hired a person to deal with retailers, to hear about their problems,” Mason said.

“I think what has been really a success of the regional transit study efforts is they have been a joint study funded by the cities of Oklahoma City, Edmond, Norman, Moore, Del City and Midwest City. These are six cities that came together ... the partnership unanimously came up with these recommendations.”

That was the thought of Danny O’Connor, transportation director for the Association of Central Oklahoma Governments (ACOG). O’Connor made that comment last week at a public forum hosted by ACOG where a regional transit system was promoted.

Read more about an effort to fund and build a regional transit plan in next week’s Oklahoma Gazette.