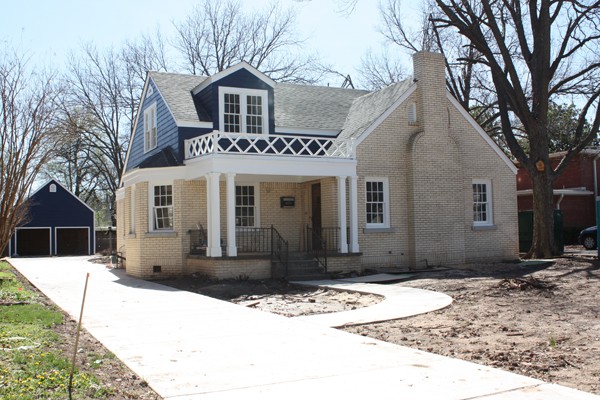 On a sunny March morning in the historic neighborhood of Heritage Hills, Brandon Swearingen worked feverishly to restore windows on an early 20th-century home.

He said historic window restorations are dominant architectural features for old houses. After glazing two panels, it’s easy to see the charm and distinct character of the window, which could date back to 1918, when the house was first built.

“My passion is here with these older houses,” Swearingen said as he admired his sweat equity.

Two months ago, the 30-year-old began work on the home located on NW 20th Street. The property was in shambles. A leaky roof caused water damage, and there were holes in outer walls and structural issues. It was previously listed as a dilapidated structure, and Swearingen purchased the property at a sheriff’s sale with the intent to restore the two-story home’s authentic elements and bring it up to modern-day living standards.

The three-bedroom home with two and a half baths should be completed in May. Swearingen said he plans to sell the property, which is listed on the National Register of Historic Places.

“If you do these homes right, they are gone before they are ever finished,” said Swearingen, who restores properties through his business, Brandon Swearingen Renovations, LLC. “In an average week, seven to 10 people will call or stop by to ask questions about the home. These homes have character. You are buying a lifestyle, and the locations are perfect for professionals who work downtown.”

Last year, the fate of the NW 20th Street property was unknown after code enforcement officials placed it on the City of Oklahoma City’s dilapidated structures list.

As the city’s historic preservation officer, Katie Friddle viewed the code enforcement report for the historic home. The house was in a state of disarray, but wasn’t beyond repair.

“What city staff takes away from these jobs is that as bad as the houses seem, they are clearly fixable,” Friddle said. “It is not infeasible for someone who has an interest to take on a property, restore it and make it livable again. It can be done, and there is a value in fixing it.”

Three properties, including a 1930s-era dwelling in Crown Heights, were saved from demolition.

Nine months ago, Sarah Bytyqi looked past the cracked siding, broken windows and yard debris at a vacant two-story house located on NW 40th Street. Once inside, she climbed over mounds of litter left by a hoarder tenant as she scoped out the interior. Despite the neglect, the home still held its historic charm and aesthetic beauty.

With an extensive restoration, the dilapidated structure could be transformed into the home Bytyqi and her Edmond family wanted.

“It was just the perfect house for us,” Bytyqi said. “It was an opportunity. We knew the house was a good value, and we knew we could restore it, based on previous projects.”

Bytyqi and her husband Andi own Verbode, a real estate firm specializing in homes in OKC’s urban core. Additionally, the couple buys and rehabs older homes to sell through their business, Lucky Investments, LLC.

Promoters and investors of historic neighborhoods, the couple always searched for the ideal home for their family. The Crown Heights property was it for a variety of reasons, including mature trees, a large lawn, walkability to Western Avenue and the strong sense of community felt after visiting with neighbors.

With extensive interior restoration, the couple had a clean slate to design a house to meet their family’s needs. They split a large bedroom into two, creating three bedrooms on the second floor. Downstairs, they moved the master bedroom and removed walls to create more open spaces. Authentic elements like the staircase, windows and a farmhouse-style back door were salvaged and restored.

“To tear the house down and build something new would have been a disservice to the neighborhood, in my opinion,” said Bytyqi, who reviewed old property records to research past owners.

C.B. Warr, responsible for many OKC houses in the 1930s and ’40s, built the home. From old newspaper clippings, Bytyqi learned the home was often a destination for social events and dinner parties decades ago. Beginning this summer, the six family members will make their own history in the house.

Bytyqi encouraged others to consider investing in older homes before building new ones.

“We should be in the habit of restoring old homes, not building new, if we can avoid it,” Bytyqi said. “There is always room for someone to come in and fix something. If we can fix this house, any house can be salvaged.”

City planners report an array of preservation projects underway in OKC. In addition to homes, there are notable redevelopment projects in downtown, such as the long-abandoned Sunshine Laundry building and Main Street Arcade.

Also, the city is preparing its first historic preservation plan, called preserveokc. The comprehensive plan will outline policies and incentives to encourage preservation. Through public meetings, city planners hope to receive feedback on which places residents think should be preserved and why.

“I think this is the perfect time for us to do preserveokc,” Friddle said. “This is so much growth, development and really cool preservation projects taking place across the city. There is an interest in revitalizing historic areas. It seems appropriate to proactively look at how we are encouraging and approaching preservation as a community.”