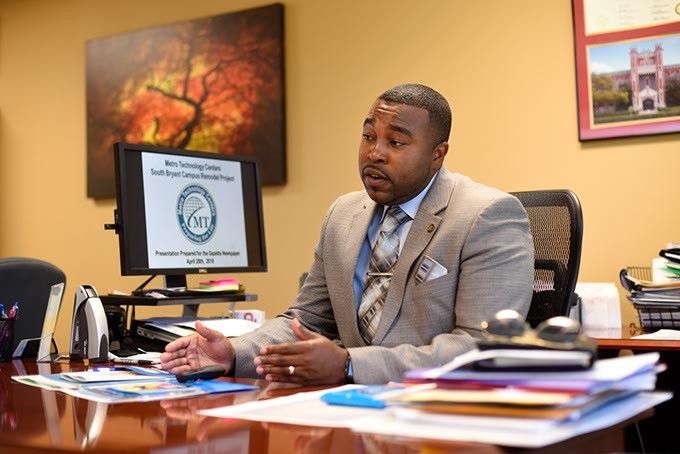 For years, Metro Technology Center leaders knew a remodel at the South Bryant campus was imperative. Constructed in 1965, the Foster Estes building opened as a vocational-technical campus for Oklahoma City Public Schools on the city’s southeast side. About 20 years later, the Oklahoma City school board agreed to turn the campus over to Metro Tech, a recently established public career and technology education district.

Over the years, small building upgrades and projects transpired, but nothing to the magnitude of a remodel. Now, 51 years after the first students enrolled in career training programs, the campus is in dire need of technology upgrades, infrastructure updates, a tornado/safe room and a building addition to accommodate the CareerTech school’s needs. Currently, many students are placed on waiting lists for programs like welding, cosmetology and graphic design.

“It isn’t necessarily the building that makes quality instruction, but it helps in that process,” said Dennis Portis, Metro Tech’s associate superintendent of instruction. “You are giving your students a competitive advantage.”

The South Bryant campus is undergoing a $22.3 million renovation, which began this school year with the site’s automotive technology center. Renovations are broken down into seven phases with the last phase, a new building for the cosmetology and barbering program, set to be completed during the 2018-19 school year.

Metro Tech is training the next generation of Oklahoma City leaders, Portis said.

“It’s not just bodies in seats and teaching the curriculum; it’s winning the students’ hearts,” said Portis, who began his career at the school in 2003 as a pre-engineering instructor at the South Bryant campus. “How do you encourage students to give back? How do you get students involved in their community? How can a student’s success help make another student successful? It is not just about skill set, but building character.”

When Portis visits the automotive technology center at the South Bryant campus, students in mechanic work clothes welcome him. Students’ names and specific patches highlighting their mastery of skills in the program are stitched on the uniforms. The uniforms were added to the program as one of the first steps in creating a Centers of Excellence for Career Training program, a national model backed by leaders in the industry.

Portis reports the simple addition of uniforms increased student motivation levels. Students feel they are not only learning the industry, but also a part of the automotive industry.

“We’ve always held standards in our curriculum, but we feel that we are building a new culture with the Centers of Excellence, which will help our students go above and beyond in their fields,” Portis said.

With Centers of Excellence, Metro Tech tweaked the automotive curriculum, adding suggestions by nationally known companies. The curriculum calls for student practice on new, modern equipment and technology, which Metro Tech plans to obtain in the first phase of the building remodel.

Metro Tech plans to expand the Centers of Excellence program into the climate and energy controls technologies, which was most recently known as the HVAC program. Instructors are moving away from preparing students for a career of HVAC and electrical repair but are covering how to create appliances and work on energy-efficient equipment.

Part of the Centers of Excellence plan is to engage local industry professionals to serve on an advisory committee for the various programs. Industry representatives provide feedback on students’ work, and instructors make adjustments to ensure students graduate ready for local employment.

Last month, the Oklahoma City Council approved an allocation request of $5 million from TIF No. 2, known as the downtown/MAPS district, to assist in the South Bryant campus remodel. The City of Oklahoma City uses TIF as an economic redevelopment tool. The fund typically assists private developments but has supported Oklahoma City Public Schools, the Metropolitan Library System and Metro Tech, which are often impacted by TIF districts freezing ad valorem tax revenue for decades.

In 2009, Metro Tech received $550,000 in TIF funds to support its downtown business campus and purchase classroom furniture and equipment.

Portis said the new funding stream will benefit an area of Oklahoma City that has struggled with blight and limited economic development. Located in the 73129 ZIP code, the South Bryant campus pulls most of its students from an area south of Interstate 40 and just north of Valley Brook town limits. Twenty percent of residents rely on public assistance, according to most recent data from the United States Census Bureau.

Editor's note: Oklahoma Gazette learned of Dr. Dennis Portis' death Monday, May 9 through Metro Technology Center. Portis was a 13-year employee of Metro Tech. In 2003, he began his career as an instructor of the pre-engineering program. He became associate superintendent of instruction in 2013.